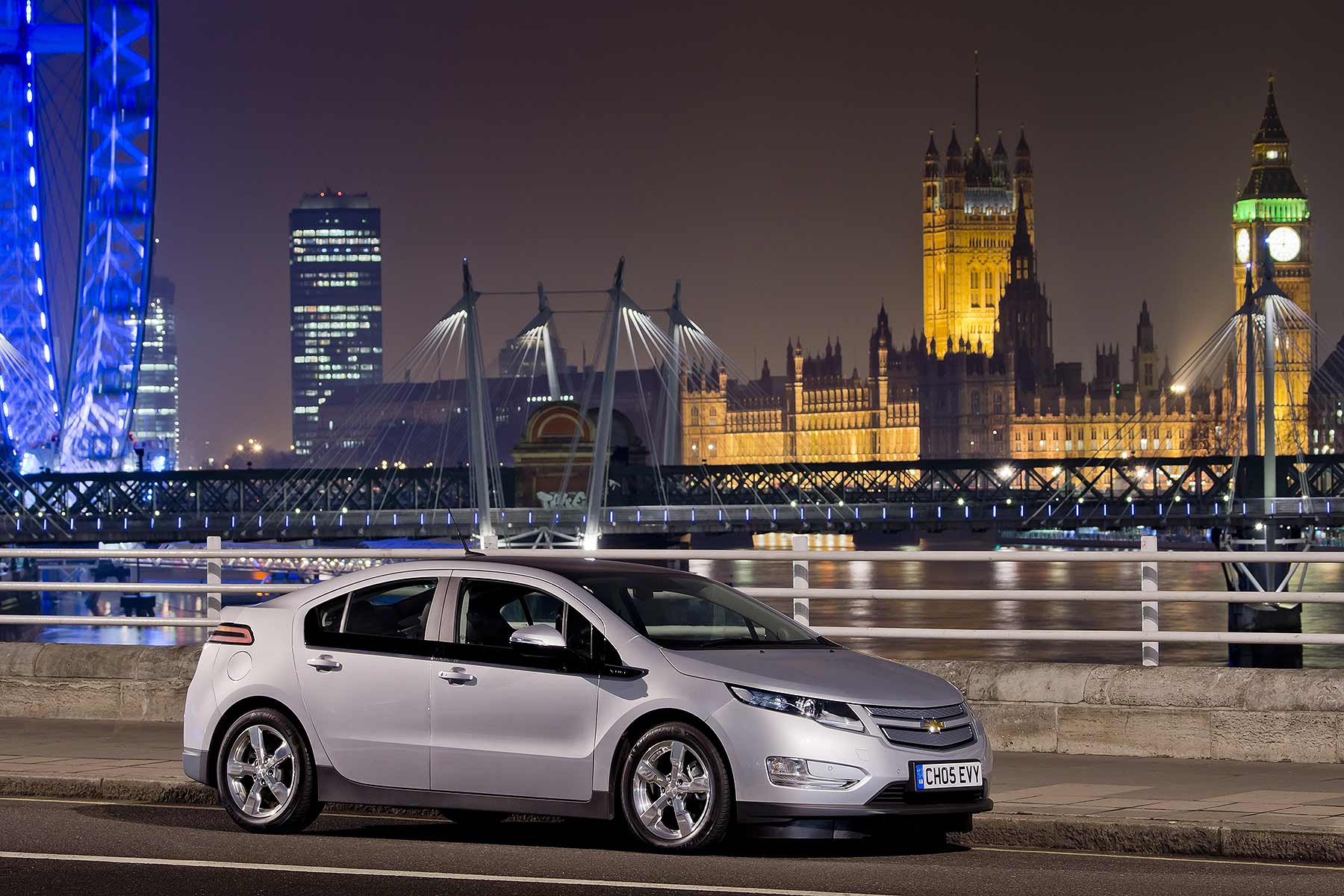 But this car, and its slightly more handsome Vauxhall Ampera cousin, are that rare in Britain that it’s worth reminding ourselves of what this wheeled revolution is. Which is an E-REV, or extended-range electric vehicle.

On battery power alone, it’s capable of travelling 30-50 miles, which is more than enough for most commutes. When your volt and amp supply is exhausted, you have an 86hp petrol engine that kicks in to part-replenish the battery, and provide the 150hp electric motor with juice, enabling you to travel another 310 miles without needing to plug your E-REV into a power supply or pump petrol in its tank.

The revolutionary part of all this is that you have a zero emission electric vehicle with a more than decent range when the battery’s exhausted, a pretty economical car when the petrol generator is running and a spectacularly economical car when it’s running on electricity alone. And a spectacularly green one should the electricity used to recharge it comes from renewables or a nuclear source.

All of which sounds relatively simple conceptually, but required a gargantuan research and development push (and money pile) from GM to realise, its tasks including the development of lithium-ion battery packs for safe use in cars, and evolving safety systems that would enable the Volt to score the full Euro NCAP five stars.

Indeed, when GM triggered the serious investment phase in the programme, the project’s bosses freely admitted that they weren’t actually sure that the Volt could be developed for the showroom because the battery technology wasn’t where it needed to be.

Which might make you wonder why GM wanted to make such a large bet on a semi-unknown technology. There are lots of reasons, of course, but a major one was that this often troubled organisation began to get fed-up with the positive PR that Toyota was getting with its Prius, and how few glowing column inches GM was winning for its (admittedly unbuyable) fuel cell initiatives, the cost-effective hybrid system it had developed for its big trucks and the fact that its recently acquired Hummer brand was being vilified despite its trucks being no less thirsty than many rivals’. Including Toyota’s.

Plenty of the kicking was justified – a ‘Breaking Bad’ Pontiac Aztec, anyone? – but not all of it was and a man getting particularly cheesed off with this situation, was one Bob Lutz.

That his bosses were reluctant is understandable when you consider their all-too recent memories of the ill-starred, patchily admired, feature film-inspiring PR disaster that was the EV1. GM eventually crushed most of these neat and rapid little electric coupes, squeezing the life out of any PR advantage they might have garnered and prompting widespread (and misguided) accusations that General Motors had killed the electric car. It hadn’t, but it could certainly have handled the project more eptly.

So Lutz’s attempts to trigger a new EV project were repeatedly batted away, until the day that Tesla launched its Elise-based Roadster with a lithium-ion battery pack, a 200 mile range and a 0-60mph time of 4.0 seconds. That a silicon valley start-up was showing GM the way was enough to get Lutz a grudging go-ahead and the chance, he hoped, to win back some of Toyota’s hybrid advantage. 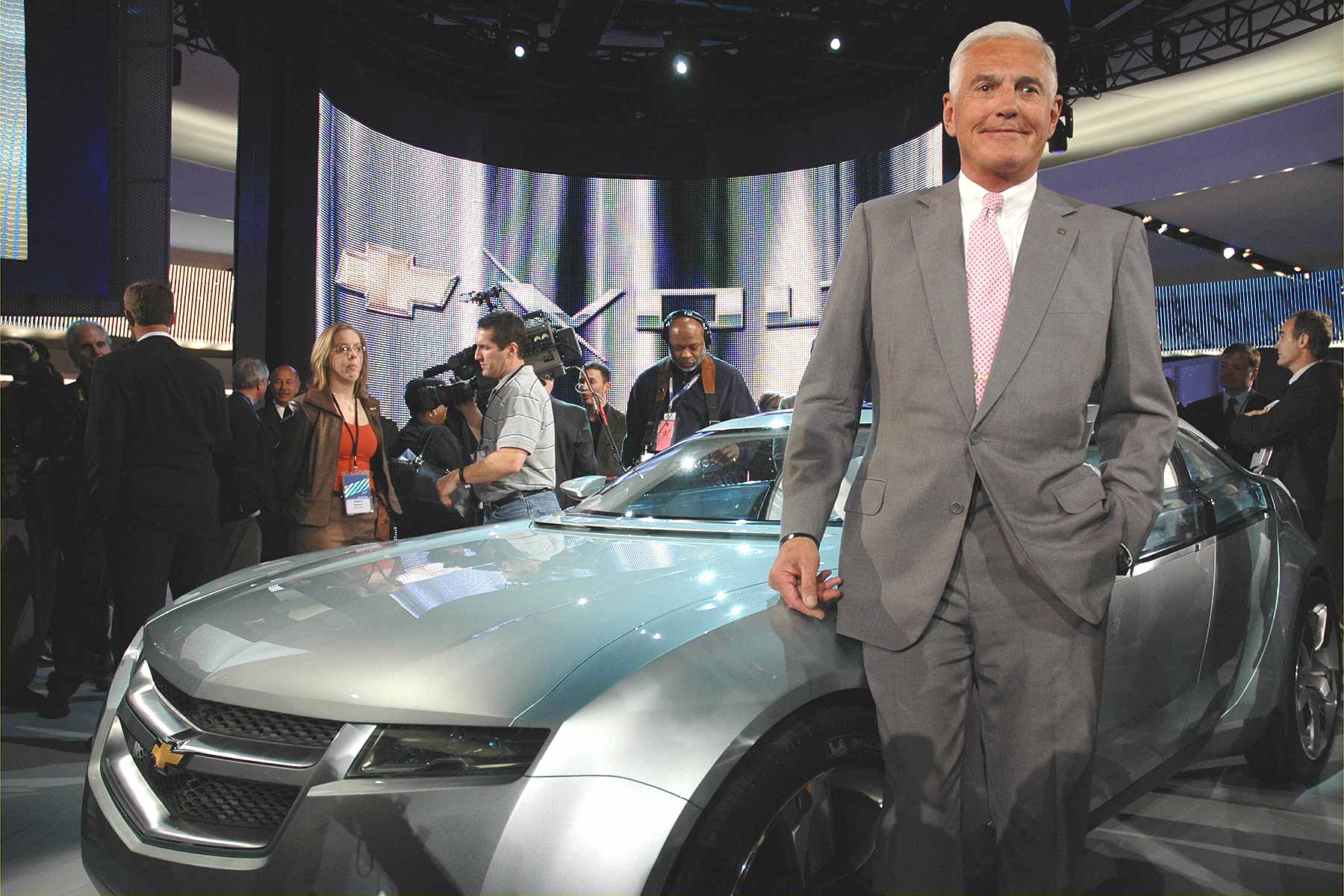 His electric car very rapidly turned into something else when engineering boss colleague Jon Lauckner persuaded Lutz, with the aid of a pad and a gold-knibbed fountain pen, that what was needed was a range-extending hybrid and not a pure EV. The batteries required to give an EV a decent range (i.e. something a lot more than the 100-mile maximum that many of today’s EVs give you) would have been more expensive than the entire car at that point, argued Lauckner, who saw a range-extender as a way to reduce the size and price of the battery pack to (semi-) affordable levels.

GM showed a sexily styled concept called the Volt at the 2007 Detroit show which won the kind of headlines Lutz was dreaming of, and gave itself the headache of delivering on its promise, something this American giant often failed to do. Four long years and many press briefings later a Volt emerged that looked nothing like the sexy original, whose shape sliced air about as cleanly as a combine harvester. But it certainly contained the promised technology and what’s more, it worked.

True, there were some early troubles. GM’s foolish claim that the Volt only ever ran on electric power was eventually uncovered, the petrol generator engine occasionally lending a direct hand when the car was running flat-out to save the battery, and a fire from a parked test car didn’t help its case either, but mostly the reviews were positive. Positive enough to win it a heap of awards, including the 2011 World Green Car of the Year.

But none of this was enough to overcome the one big problem with this revolution. Which was that it was not a revolution of the people, the Volt and Ampera simply too expensive to silently glide onto people’s radar. Even after generous government subsidies here and in the US, the pair cost getting on for double the price of a similarly sized Vauxhall Astra or Chevrolet Cruze.

There was the further drawback of only four seats rather than the usual five, the bulky T-shaped battery pack stealing the back-bench’s middle seat. And the Lehman Brother stole much of the Volt’s PR thunder, the collapse of this bank and the subsequent whirlwind economic depression tipping General Motors into bankruptcy. Suddenly, the angst over Toyota’s perpetual PR advantage was dwarfed by GM’s need for survival.

By the time a leaner, more humble General Motors had emerged, the Volt’s moment in the sun was passing, and the realisation that fuel prices simply weren’t high enough to interest American buyers in amazing fuel consumption were undermining its economic case. The payback period for the extra outlay required to acquire a Volt over an equivalent Cruze has never been definitely calculated (though many have tried) but there’s no question that you’re looking at a around eight years or more. And that’s too many.

That led to GM selling far too few Volts, only 65,000 finding US buyers since 2010. At one point, previous GM boss Dan Akerson reckoned on selling 60,000 a year in North America alone. In Britain, few Volts and Amperas have been sold, and the model will go unreplaced later this year. In the US, however, there is an all-new new Volt that we won’t get. It goes further on amps and gasoline, fields the missing fifth seat and critically for GM, costs an alleged $10,000 less to make. And that should give the second-generation model a better chance. Especially if the oil price goes up.

In 1974, Triumph broke with tradition and launched its wedge-shaped TR7 sports cars. The advert claimed it was ‘The shape of things...
Read more
Great Motoring Disasters

Too much success can stunt the mind. That can apply to the collective mind of a company just as easily as it...
Read more
Great Motoring Disasters

When it comes to road transport, four wheels are generally better than three, and if staying dry and safe bothers you, two...
Read more
Previous articleBarn finds at the NEC Classic Car and Restoration Show
Next articleThe coolest car dashboards

From racing Renaults to Formula 1: the story of Alpine

As Alpine enters Formula 1 for the 2021 season, we look back at the 65-year history of this storied French brand
Read more

From the Lancia Trevi to the Citroen C6, these are some of the world’s coolest car dashboards
Read more
Features

NSU Ro80: the Car of the Year that killed the company