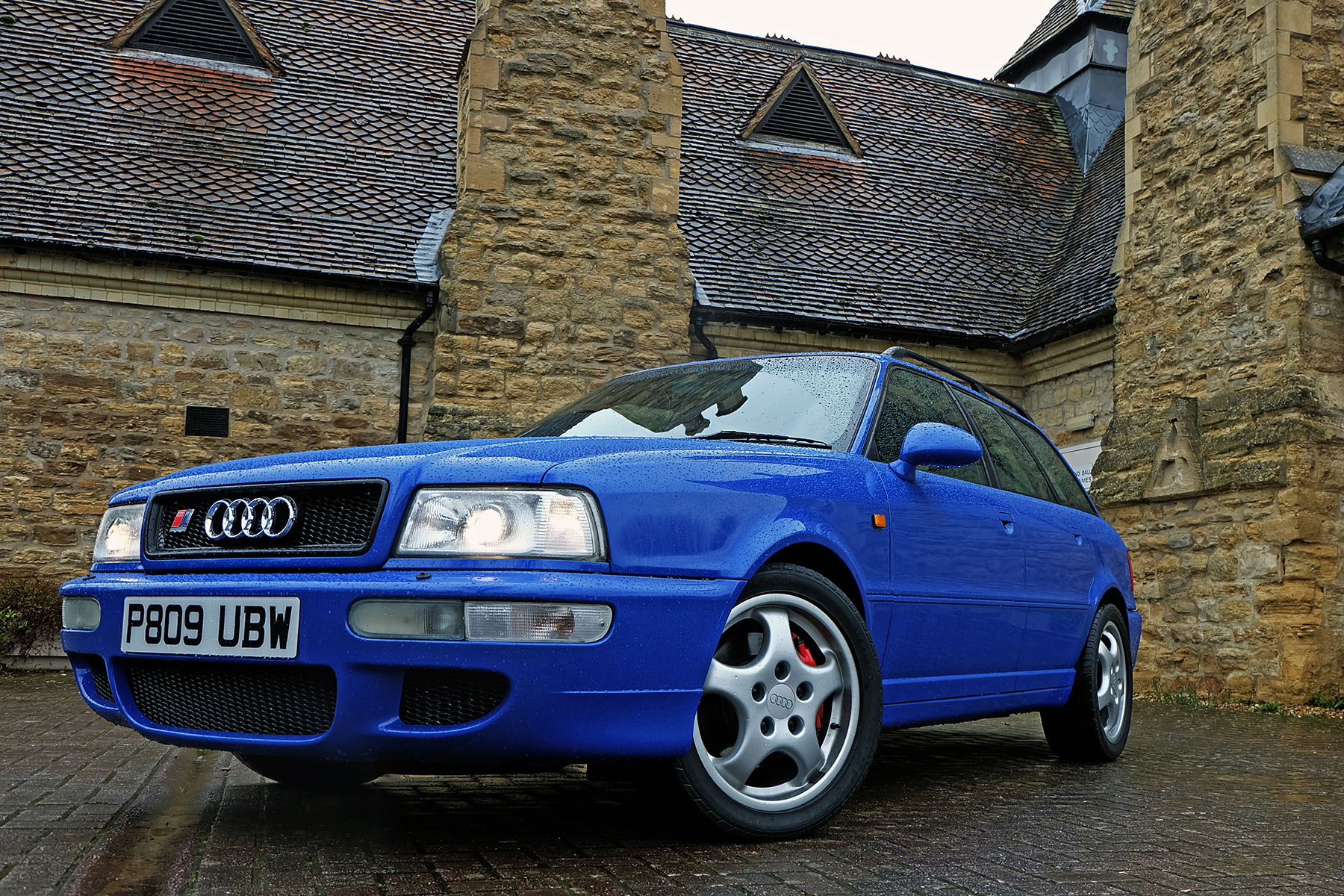 Load-lugging carry-alls, estate cars used to be the preserve of those who wanted to cart around kids or kit. If you wanted driving fun, you’d have to leave the family at home and jump in your two-seater. Of course, hot hatches offered modest dynamic thrills and practicality, but were still left wanting for ultimate transporting ability.

With the exception of BMW’s E34 M5 Touring, the genuinely fast enthusiast-aimed estate car was conspicuous by its absence up until the early 1990s. And then Audi’s RS2 sped into view and kickstarted the performance load-lugger genre.

And it certainly was conspicuous when painted RS Blue Pearl (a dozen less attention-grabbing colours were also available). Launched in 1994, the RS2 was based on the B4 80 Avant, and packed a 315hp, 144hp-per-litre punch. 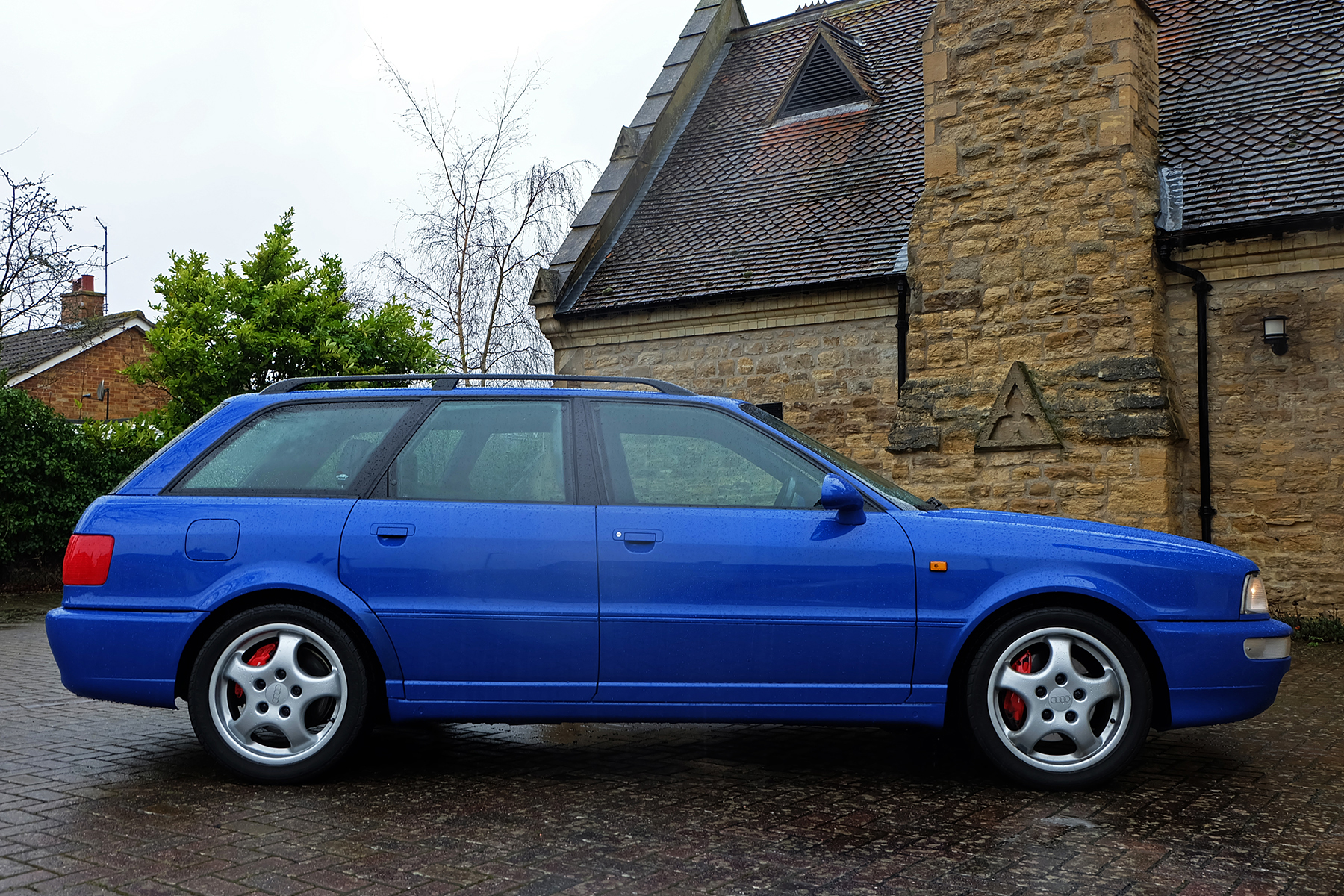 Powered by a 2.2-litre, 20-valve, five-cylinder engine borrowed from the 230hp S2 Avant, the RS2 boasted a KKK turbocharger that was 30 per cent larger, running 1.4 bar of boost. A six-speed manual gearbox sent power to all four wheels, while a manually-operated locking differential was employed on the rear axle.

Sound good? We haven’t told you the best bit yet. The £45,705 RS2 was a collaboration with Porsche, and as well as the engine upgrades, Audi’s Stuttgart bedfellow added 968 Clubsport ‘Cup’ wheels, tyres and brake calipers. Yep, that’s right, those red anchors peeping out from the rims have genuine sports car pedigree.

There are also the shapely 968/993 door mirrors, 993-style bumpers and blink-and-you’ll-miss-them badges that bear the ‘RS2 Porsche’ legend. And the bright red ‘prismatic’ light strip which runs the whole width of the RS2’s stubby rear end – a nod to the 911 Carrera 4. All in all, a comprehensive makeover, but one which remains on the delicious side of subtle. 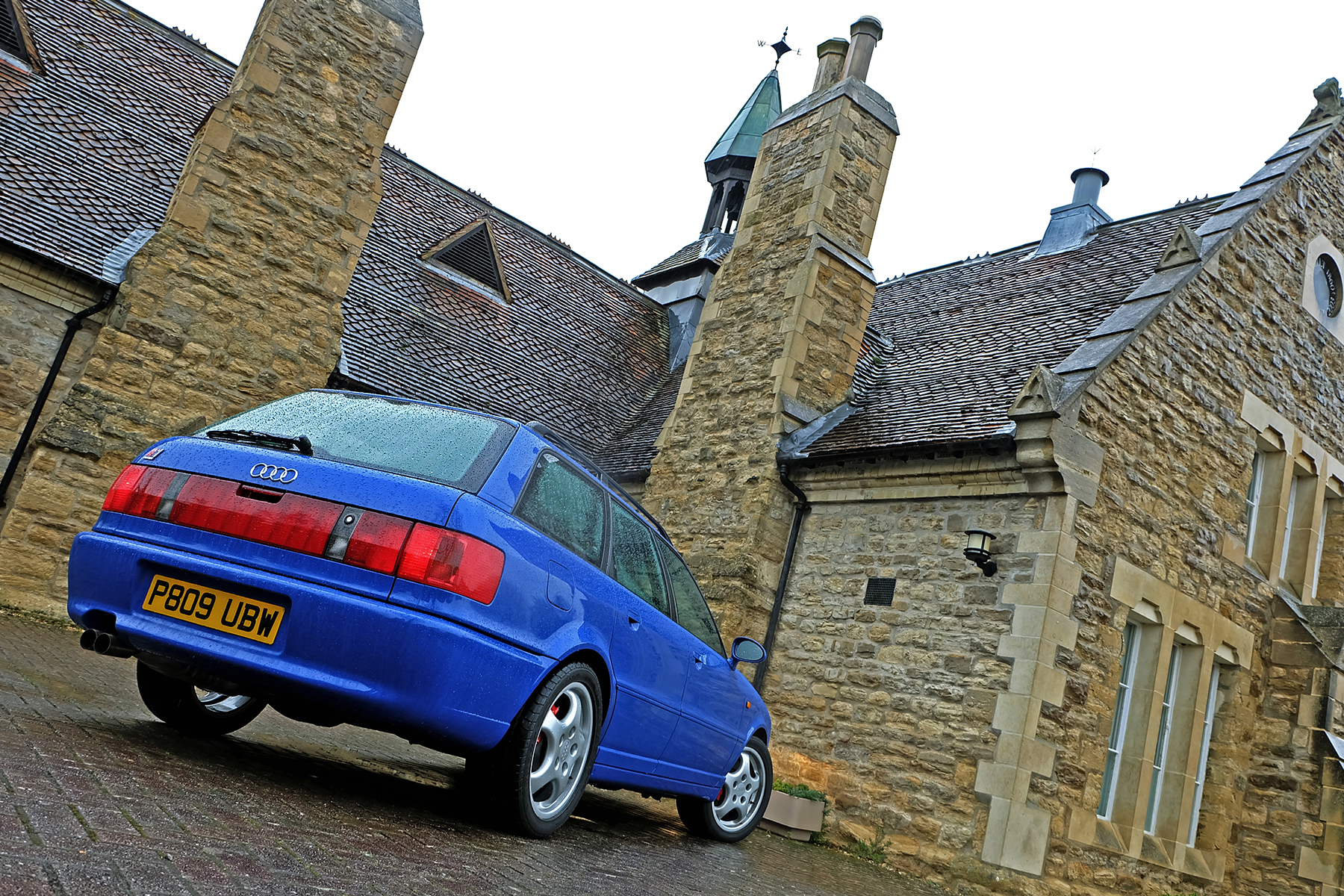 The RS2’s athletic going over continues inside. The Recaro sports seats envelop you, their lurid blue Alcantara trim signalling sporting intent. Ahead of you sit a quartet of white-faced dials – including a 180mph-calibrated speedo – while the centre console houses three further gauges showing oil pressure and temperature, as well as battery voltage. Aside from a three-spoke, leather-wrapped and RS2-branded steering wheel, it’s all standard early 1990s Audi 80, which means bank-vault-solid build quality and no-nonsense slabby style.

With smaller dimensions than estate cars of 2018, it’s easy to place the RS2 on the road, made even easier by excellent all-round visibility. At low speeds it’s as docile and unspectacular as other contemporary 80 Avants, but bury your right foot and you soon realise the RS2 is more of a monster. Hang on, wait a few seconds… there it is!

The RS2 takes time to spool its turbo, but once it does, its pace is ferocious. Audi quoted a zero to 60mph time of 5.4 seconds and a top speed of 163mph, and the RS2 easily feels that quick. So shocking was its pace when it was launched, Autocar & Motor recorded a 0-30 mph time of just 1.5 seconds. At the time, that was faster than both the McLaren F1 and Jacques Villeneuve’s Formula 1 car.

Although its aural output is muted at lower revs, the engine warbles wondrously ahead of you in the only way an Audi five-pot can, and you really have to wake it to extract its power. 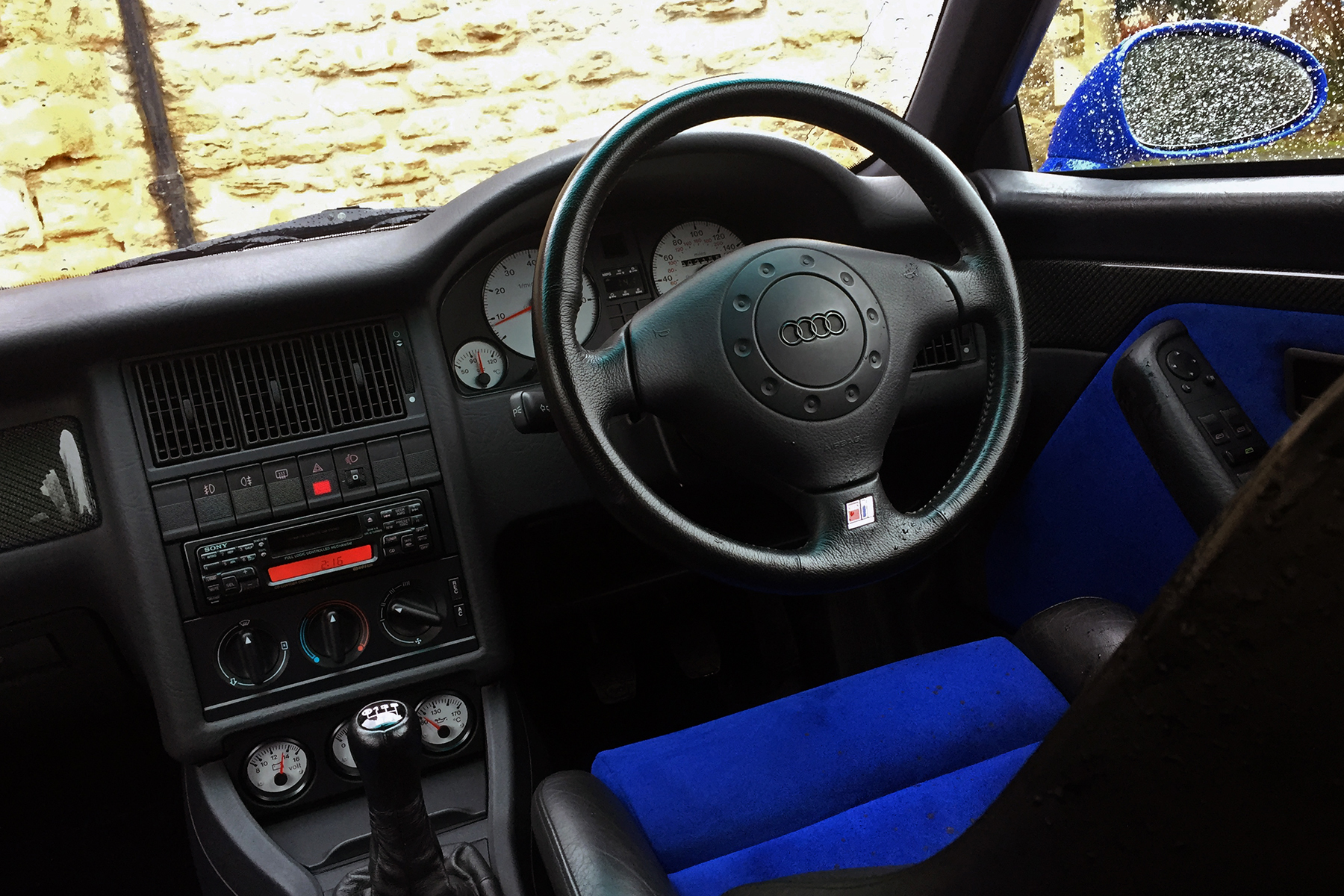 Below 3,000rpm not much happens, then you ride the 302lb ft wave of torque and by 7,000rpm it’s more or less all over. Stay in the middle ratios to keep the engine on the boil and the RS2 just keeps on finding more speed. It’s both intoxicating and intimidating, and all the time you’re aware this is an estate car – an estate car with up to 1,200 litres of luggage space. Unbelievable.

As is the RS2’s cross-country capability. The Quattro four-wheel drive system means the all-pawed Audi sticks to the road spectacularly, not even relinquishing grip in the pouring rain that dogged our drive. It’s so fabulously capable, standing water proves no deterrent and the RS2 just powers through it, its wonderfully compliant suspension soaking up the bumps with little jarring.

Sensation-wise, the RS2 feels very of its time. The nicely-weighted steering is sadly devoid of any meaningful feedback, and although there is some body lean, it stubbornly slingshots its way out of corners with no fuss, ready to soar up the straight and devour the next apex. The uprated Porsche brakes offer progressive retardation, which is just as well, as Audi UK’s precious heritage press fleet car has under 3,000 miles under its original Dunlop SP Sport 8000 245/40 ZR17 tyres. 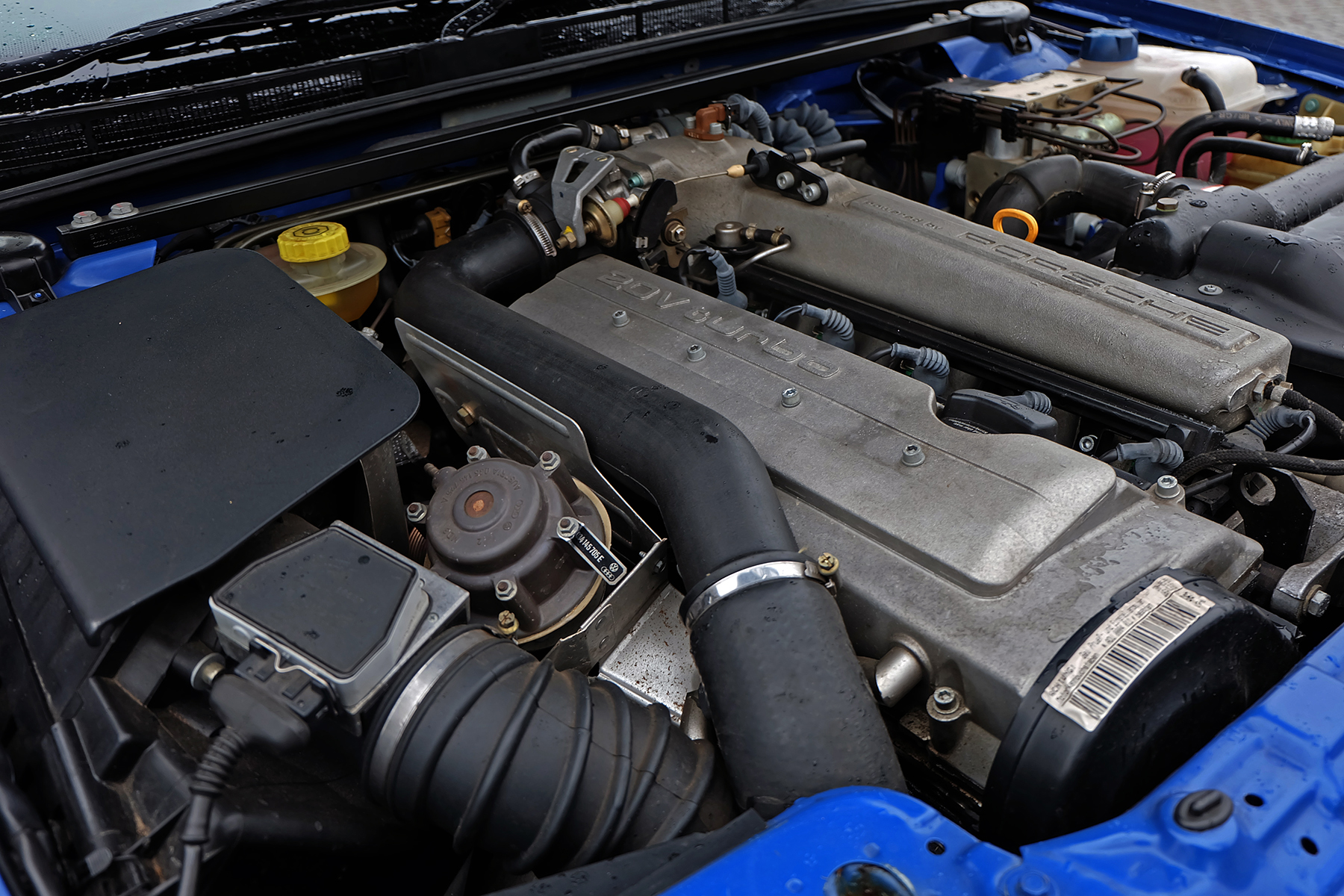 The hand-built RS2 was a performance car hero the moment it left the Porsche production line, and values have never been bargain-basement low. That’s partly due to its Stuttgart and Ingolstadt parentage – it’s amazing what a seven-letter word beginning with ‘P’ can do for values. It’s also because it was a leftfield car that hid its performance under what some consider a frumpy 80 Avant body. Lastly, values are buoyed because only 2,891 were made in 18 months, with just 182 official UK right-hand-drive cars.

RS2s, therefore, are pricey. High-mileage cars are obviously worth less than pristine examples with few miles, but left-hand-drive European imports offer more choice. Mechanically, the cars are relatively bombproof when it comes to the engine and 4WD system, and they can handle high mileages with little issue.

The main problems lie with the gearbox, which has a reputation for being weak, as well as coil packs that let go. The handbrake cable can also stretch, while spark plugs should be replaced every 20,000 miles. Suspension top mounts need to be renewed every 40,000 miles, the cambelt every 80,000. Parts and servicing aren’t as costly as you might think, but with the car’s increasing age and provenance, some bits are hard to come by. 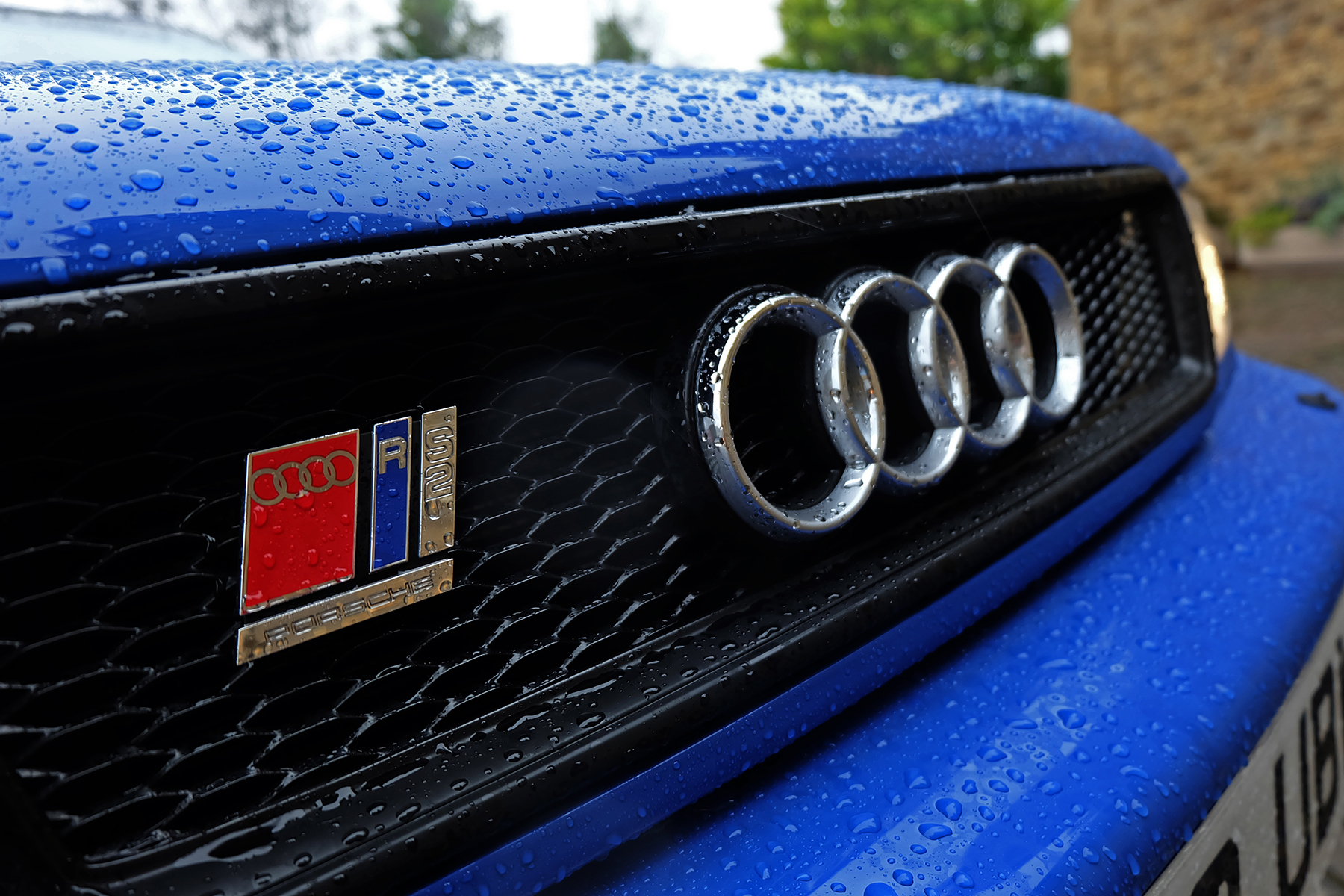 The RS2 was pivotal in giving an Audi a whole new line of performance cars and is perhaps the most inspirational (and aspirational) car in its rich history behind the original Quattro. Its pioneering legacy can still be felt with the current line-up of hot RS-badged Audis, and its retro-cool cachet guarantees its appeal today. It also underlines its importance in being the first Audi RS machine.

But, that lure would be pointless if the drive didn’t match up to its looks. Thankfully it does, and the fact that the RS2 marries supreme pace and a sense of occasion to staggering all-round ability and good, old-fashioned practicality seals the deal. It’s a modern classic and practical performance car icon for very good reason. That’s why it has so many admirers, and why we count ourselves among them.

The first car I ever crashed was a Lotus Esprit. Rounding a corner too quickly, it flipped onto its side, bounced between...
Read more
Previous articleAlfa Romeo 156: the car that failed to take on the BMW 3 Series
Next articleDrive a classic car in Scotland? You’re officially less likely to crash

Rennsport Collective 2020 to celebrate ‘the best of Porsche Motorsport’

What you need to know about Renn20 – an event championing Porsche in motorsport – including how to buy tickets.
Read more
News