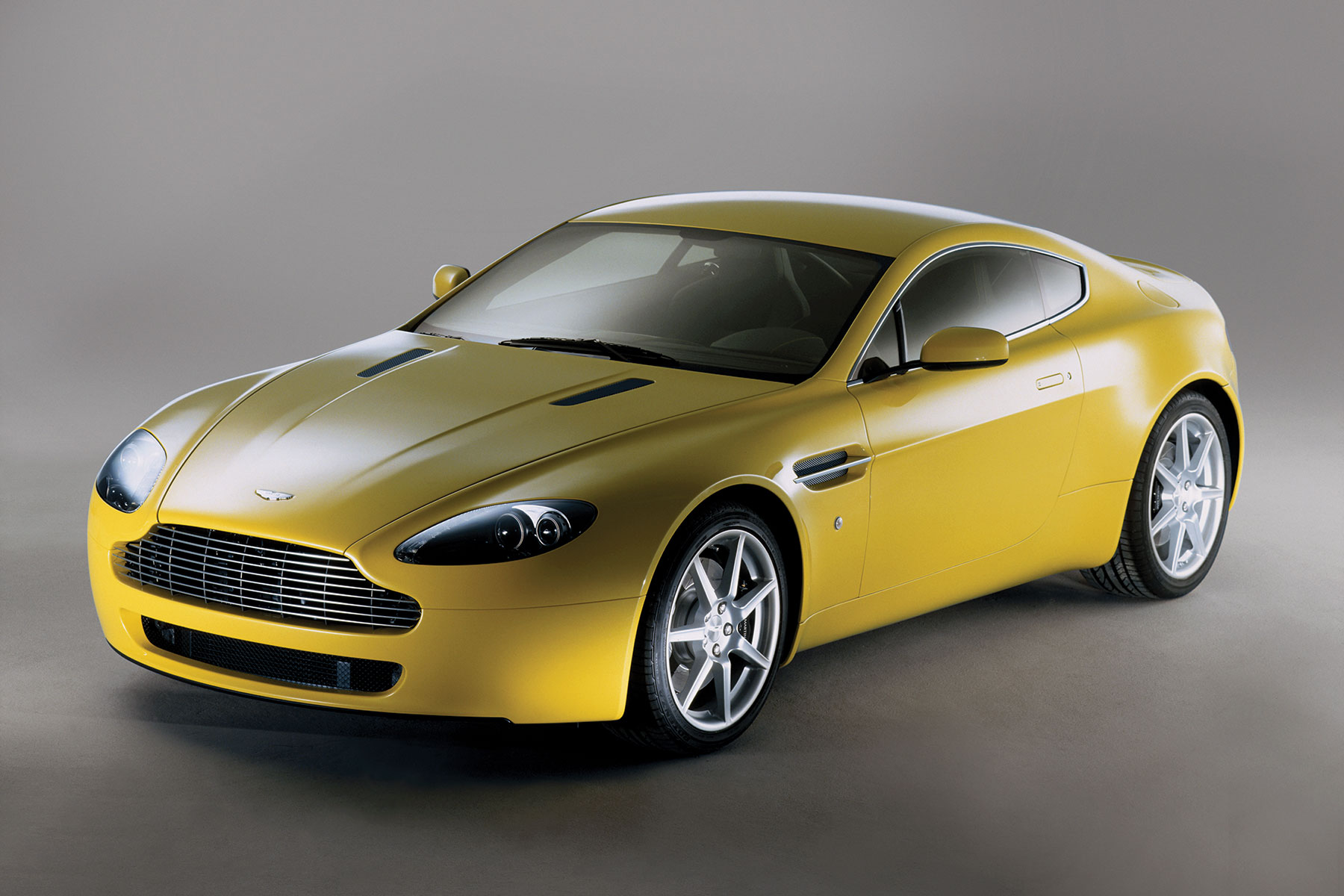 Ulrich Bez is a matey guy, a polo shirt and trainers man when half his guests are in jacket and tie. And he bats off my comment over dinner about the steering in a light-hearted manner. “Of course the steering has enough feedback – you just need to drive it faster.”

He may be right. We’ve had a short 40 miles behind the wheel of his new V8 Vantage, a car he takes enormous personal pride in. The Tuscan roads are slow with holiday traffic and plenty of tight corners, and there’s little chance to stretch the legs of the Vantage even in third gear, let alone the final three. It’s enough time to find out that the gearchange is heavy work, the engine roars like a wounded lion and it goes like hell. It is also the most drop dead gorgeous coupe you’ll buy in 2005.

Some argue that Aston Martin is running a risky tactic by making its three models all so closely similar. It’s all very well building a family likeness, but the DB9 is so similar in size and appearance to the Vanquish that even AM salesman are known to make mistakes (tell-tale – the bonnet line on the DB9 runs right through to the front of the car, the Vanquish has a front bumper). That’s more than a minor issue when the Vanquish costs 50% more.

The lower and more compact Vantage stands apart, the taughter, tougher kid brother. It owes a great deal to the DB9 though, the company strategy being to build both on a common engineering platform. There are, too, some remarkable visual similarities when you look a little more closely. Doors, bonnet, dashboard and seats all look identical and indeed some are, final trimming apart. Aston Martin has gone bust five times and by making savings like these Dr Bez is making sure that it doesn’t happen a sixth.

Economies of scale help too. 3000 V8 Vantages a year is the business plan and with close to 6,000 names already on the list, things look good, though they will look better still when a deposit has been collected on each car. The big deal for any potential Vantage owner is the exclusivity. Porsche build the 911 at ten times the rate. Maserati and Ferrari sales are closer in volume but both offer a different ownership proposition to the British machine.

So just what are you buying into with this new Aston Martin? The raw details are a 4.3-litre quad-cam, 32 valve V8 producing 380bhp at 7000rpm and 410Nm of torque at 5000rpm. The engine is pushed so far back under the bonnet that the balance is almost exactly 50:50 front:rear; the rear-mounted Graziano 6-speed gearbox aids the equilibrium. Bodywork is a mix of aluminium, composite and, surprisingly steel – those curvaceous rear wings would be too heavy in composite and too floppy in alloy. Everything is mounted on, or hung off, AM’s unique VH Vertical Horizontal aluminium chassis architecture.

This is all a far cry from Aston Martins of old, yet it comes together with devastating efficiency. Everything about the Vantage is sharp. The acceleration, the steering, the engine note, the sheer presence of the machine. It reaches 100kph in 4.8 seconds and, like the DB9, the engine has a soundtrack that sends a tingle down your spine. In place of the higher frequency shriek of the 2+2 there’s a more guttural bellow of a V8 that’s talking serious business. This may be more commonplace in the US and Australia, but it adds a fresh dimension for European supercar drivers.

And onlookers. If you think car from Gaydon sounds good inside, the added dimension of volume and an extra crackle puts this alongside an F430 in the jaw-dropping stakes. For those who judge their cars by the impact they make on others, Aston Martin has got it spot on in both aural and visual terms. 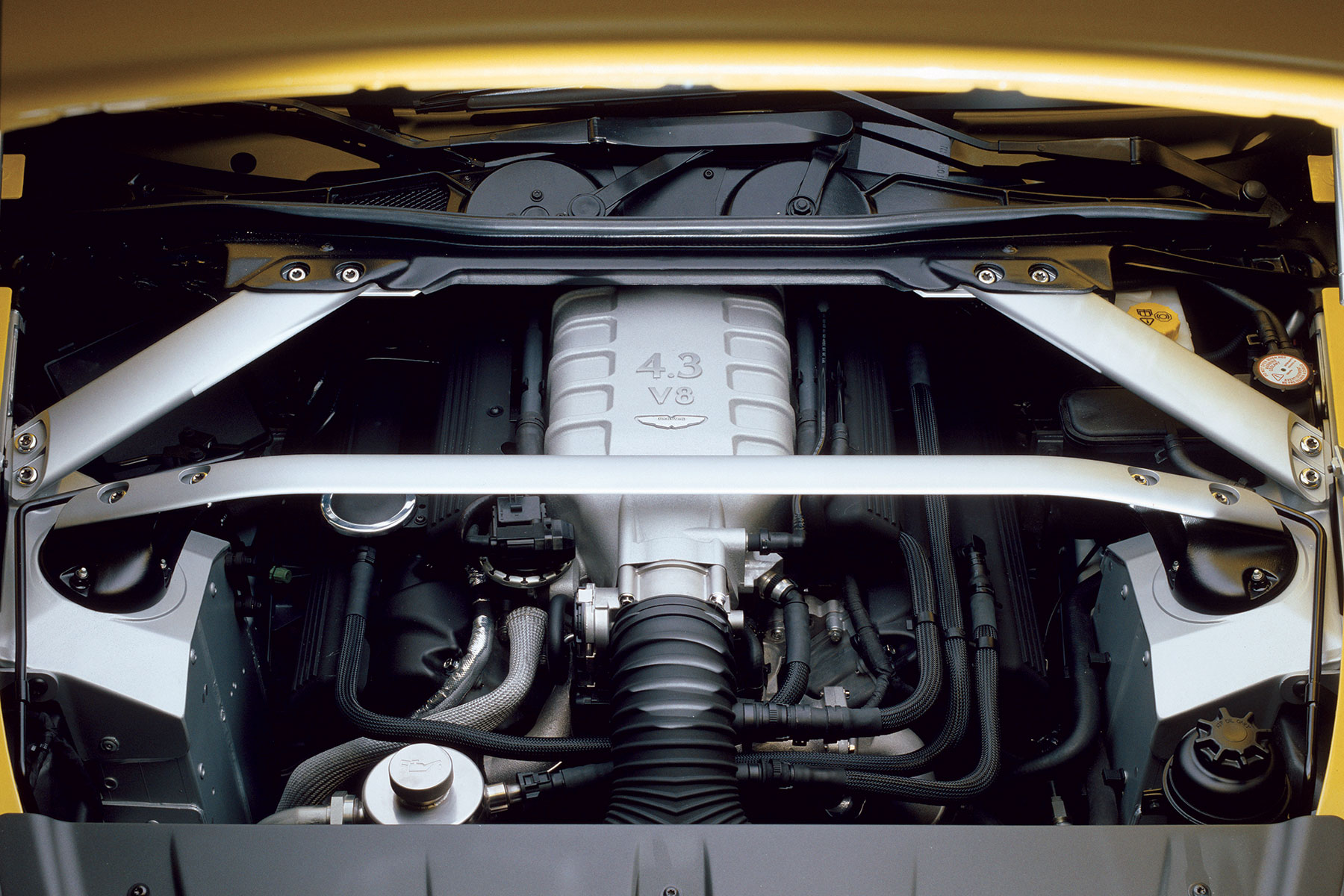 At 1570kg it’s both lighter and nimbler than a DB9, and can polish off a lap at Nurburgring a good eight seconds quicker. But compared to the 3.8-litre 911 Carrera S, the Vantage’s 25bhp power advantage doesn’t seem to outweigh its additional 150kg. I say “seem” because comparisons at this stage are necessarily tentative but there is little doubt that below 4,000rpm the Vantage feels fast but without the punch of the German rival.

As for the steering, there is no denying it does what’s asked of it very well. The turn-in response is sharp and immediate. The test cars were on the optional 19 inch rims, and the grip from the Bridgestone Potenza tyres is unwavering. Punch the Vantage aggressively into and then out of bends and the DSC stability control does its stuff with little intrusion, but such is the measure of adhesion in the dry that you have to deliberately provoke the car to get to that state. The truth is, though, that you never get the level of feedback through the wheel, that final intimate delicacy, that gives you the confidence to enjoy to final reaches of the driving envelope. It does ride well, however, even on those bigger wheels.

The shift quality is undoubtedly an issue, but swapping around cars suggests that mileage may ease the heavy nature. Certainly the downshift from third to second for a tight curve can take long enough for the revs to drop off after a bit of deft heel and toe work. There will be alternatives before too long anyway, either a full auto box or a similar paddle shift system to the Vanquish.

Dr Bez takes pride in the fact that he can get his mountain bike in the back of a 911, and says you can do the same in the Vantage. Both sound unlikely scenarios, but there’s little doubt that the Aston’s lifting tailgate means you’ll get a couple of golf bags or skis in. Boot capacity for more everyday luggage is impressive, and there’s plenty of room for a couple of soft bags and coats behind the seats too. 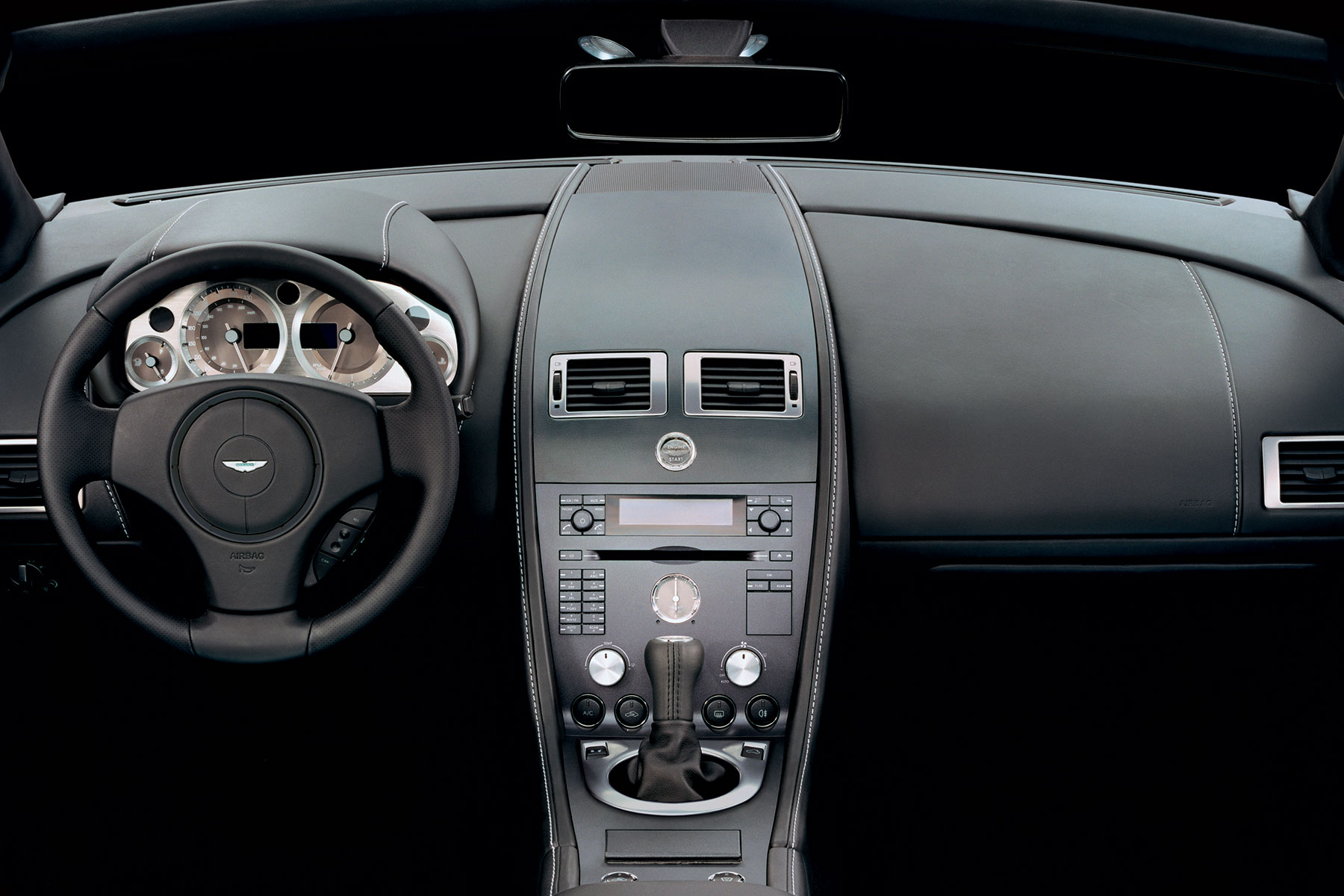 The interior may take the fascia and seats straight from the DB9 but it feels snugger and more focussed inside. This is an extremely comfortable environment to contemplate an expedition across continents, though there’s little of the visual delight of a Maserati or Ferrari. While the wood panelling of the DB9 would be out of place, it’s all a bit too monochrome to make an impact.

With the move away from the hand built legacy of Newport Pagnell to the hand assembly of Gaydon in Warwickshire, Aston Martin is striving to hang onto the bespoke tag that its cars have always enjoyed. So the leather is all hand stitched and the fact that the stitching sometimes veers away from total machine-produced perfection, rather adds to the appeal rather than detracts. The engines still have the craftsman’s name etched onto a plaque, but these days, like the V12s of the DB9 and Vanquish, they are hand assembled in Köln Germany and shipped over for installation.

The V8 Vantage may hark bark to the style and ethos of Aston Martins of old but, with absolute necessity, the engineering design and manufacturing processes have changed completely. The new baby Aston may have a few question marks over its final execution, but there’s little doubt that it is the right car at the right time.

You've got a year to prepare your car for the 2021 Festival of the Unexceptional. Here, we reveal how to impress the judges at the Concours d'Ordinaire.
Read more

As the 25th anniversary of the Ford Mondeo approaches, we take a modern day look at the original Sierra replacement
Read more
Cars