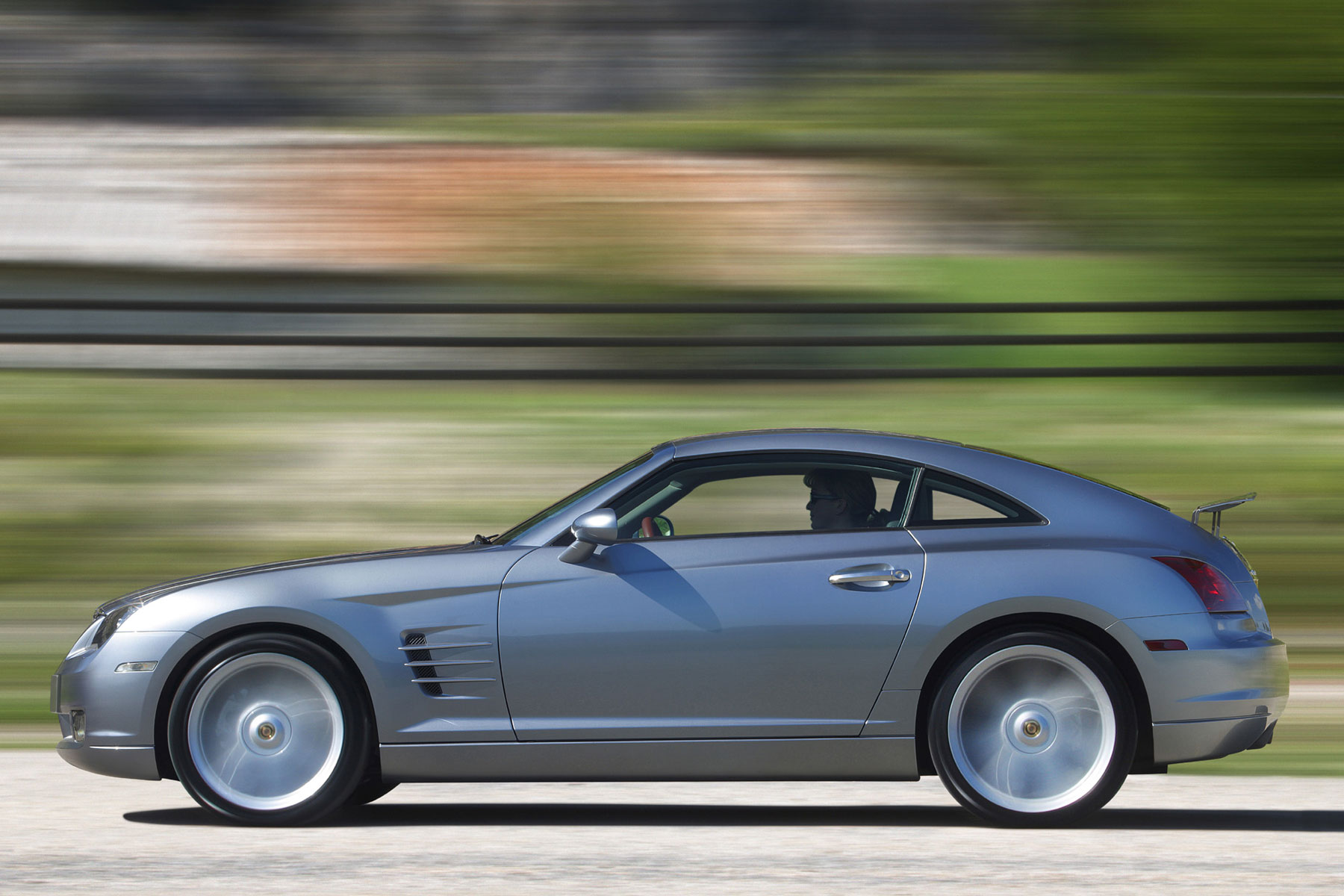 Interesting question. The Crossfire looks like a styling exercise for an outlandish motor show exhibit – which is exactly how it started out. Then, as the story goes, Chrysler big–wigs said “Gee, we just have to get this car into production real fast”. But designing a car from scratch can take up to five years, and Chrysler wanted to do it in two. So it drew on the car park of its owner, DaimlerChrysler, took the current Mercedes SLK and built the new body around it. The result is an awe–inspiring two–seater coupe that makes jaws drop wherever it goes.

There’s lots of competition in the £20–£30K coupe price bracket, including the Audi TT, Mazda RX–8, and Nissan 350Z, not to mention Mercedes’ own SLK. The big seller is not a compromised coupe like these cars at all, the BMW 3 Series Coupe offering realistic seating for four. The Crossfire goes to the other extreme with just two seats – the Mazda gets four, so does the Audi coupe, but you’d be hard pushed to fit anyone in the back. This is Chrysler’s only European sporting model, which it hopes will raise the profile of the rest of the range.

The jury is out on the design of the front of the Crossfire – distinctive xenon headlights, for sure, but perhaps a bit too saloon car. There’s no doubt about the back though, highly distinctive with folds and curves, venturi-effect undertray and central exhaust. You may not like it but it gives the car unsurpassed character in this price range. The Crossfire comes complete with a Porsche 911-like pop-up rear spoiler. That looks cool but the whirring of the electric motor, as it continually raises and lowers at around 60mph, gets on your nerves. Unusually the Crossfire even has varying diameter wheels. With 19” at the back and 18” at the front, it gets a nose-down, more aggressive look. The cost of this is that there can be no spare wheel, just foam and a pump, but it allows those centrally-positioned tail pipes that would otherwise have been impossible.

It’s actually a great car to drive. The V6 engine is gorgeous, as anyone who has driven the 3.2-litre SLK will know. It growls away enough to let you know it means business, never fully muted for comfort, with strong acceleration and immediate throttle response. This is a fast car in anyone’s language, and though the Nissan 350Z is quicker, many drivers will be pushed to notice the difference. The six-speed manual is a little notchy but generally fine. The five-speed auto is impressively smooth when changing up, a touch jerky on some down changes. It has a manual override with a nice feature whereby you tug the lever to the left, hold and it selects the best gear for max torque for you to power out of a bend. Grip in corners is exceptional.

The use of the basic structure from the Mercedes SLK is a clever idea, but it has one major weakness – space. There’s a false floor on the passenger side behind which lurk all sorts of electronics, with the result that even those under six feet tall will feel constrained. It’s better for the driver, but not much. The bulkhead behind the seats stops enough rearward movement to compensate. The Crossfire is thus relatively claustrophobic, with the shallow screen, a header rail very close to your head and appalling rearward visibility adding to the issues. Chrysler has also taken switchgear from the SLK and painted it silver – all a bit tacky.

The seats are quality leather items, the dashboard is well-finished in crackly black and grey, the steering wheel is chunky leather that adjusts for reach. There is even a decent amount of storage space inside including a deep glove box and nets in the doors. So if you fit, the Crossfire makes a comfortable long–distance companion as well as a fun sports car. The boot is massive for a two–seater, although there is a very high sill and relatively narrow opening through which to place your luggage. The air conditioning system isn’t full climate control, but it is powerful and does allow independent control of the temperature on either side. And the stereo system has is just fabulous, with 240 watts, 4 regular speakers and two subwoofers.

Style is a personal thing but there can be no argument that the Crossfire makes a real statement, one which we rather like. The fact that it is as exciting to drive as it looks is another strong point in its favour – this is no mamby-pamby style statement but a real sports car. Price-wise it is spot on with the competition. The Crossfire looks more expensive than some, but the equipment makes up for that – except in the case of the bargain Mazda RX-8. So as long as you fit comfortably inside, and can live with dreadful rear visibility, we reckon the Crossfire should be a strong contender.

Our man enjoyed a special date with a Reliant three-wheeler
Read more
Previous articleThe 10 worst Ferraris ever made
Next articleWhat if… Jaguar had built an XJ40 coupe?

We drive the Honda S2000 GT Edition 100 special edition – should it be on your roadster shortlist?
Read more
Cars