You could sort of see the logic, but not the beauty. True, the SEAT Toledo has never been automotive eye candy, but when version three arrived in 2004, it suddenly became a whole lot easier to appreciate the modestly inoffensive style of versions one and two.

The first Toledo, released in 1999, was a five-door hatchback that looked like a saloon. Designed by ItalDesign’s Giorgetto Giugiaro, it was also distinctive for the arrow-like shape of its rear doors, and manners rather better than you would expect of a budget machine mainly aimed – very successfully – at Spanish taxi drivers. 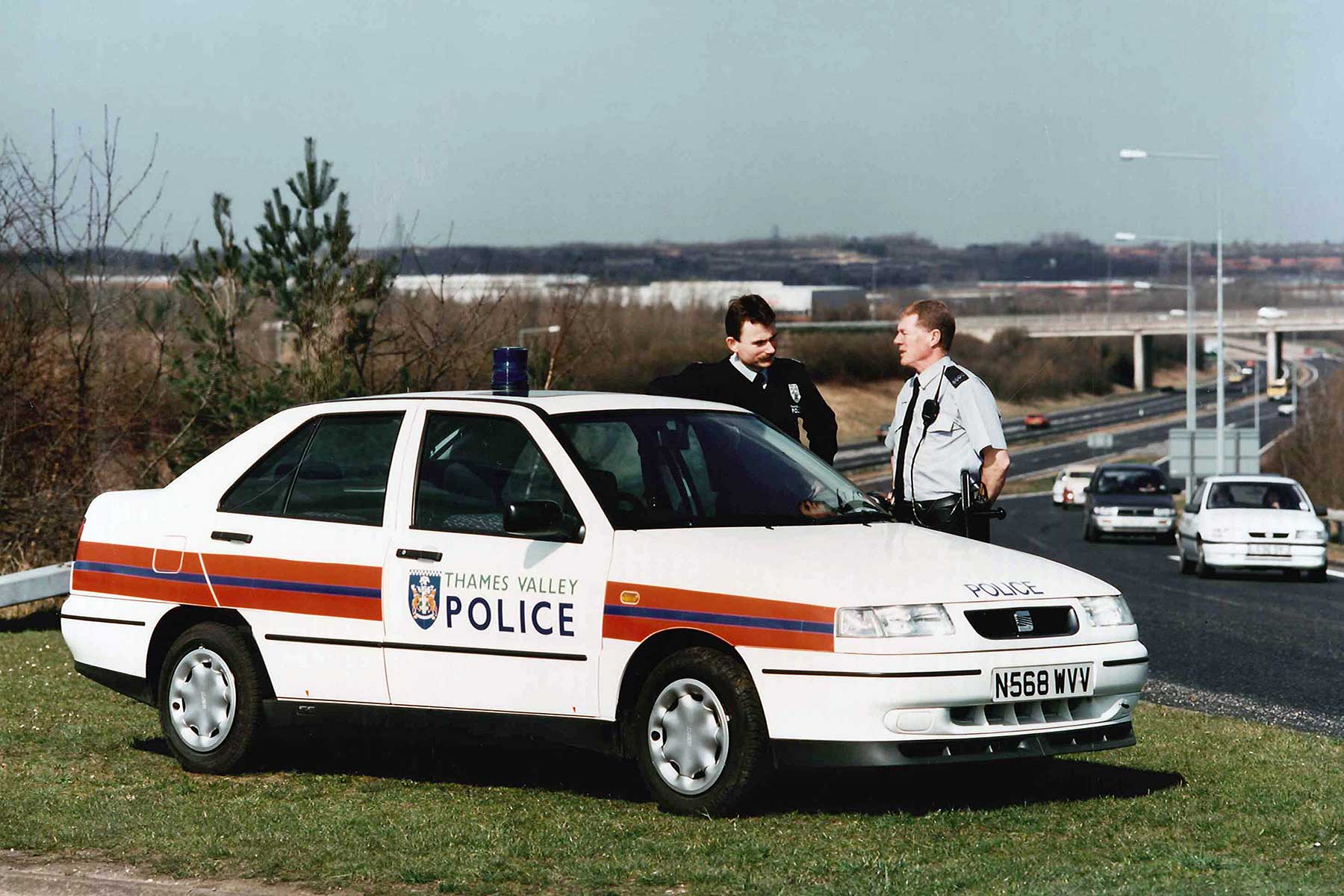 They liked its spacious back seat, enormous boot, keen price, mechanical robustness and local build. The Toledo was based on the innards of the Mk2 Volkswagen Golf, and in GT form proved a surprisingly adept and very enjoyable drive with it. This despite its cabin’s habit of exfoliating plastic trim under the duress of big bumps, high heat and hard cornering. Most early Toledos would end up with at least one piece of plastic trim surfing the carpet, and often a small shoal.

Toledo edition two was simply a Leon hatchback with a boot. The Leon was quite a handsome hatch and sired a reasonable-looking Toledo. It was more sophisticated and better made, its interior components tending to stay where they’d been screwed, clipped and glued. 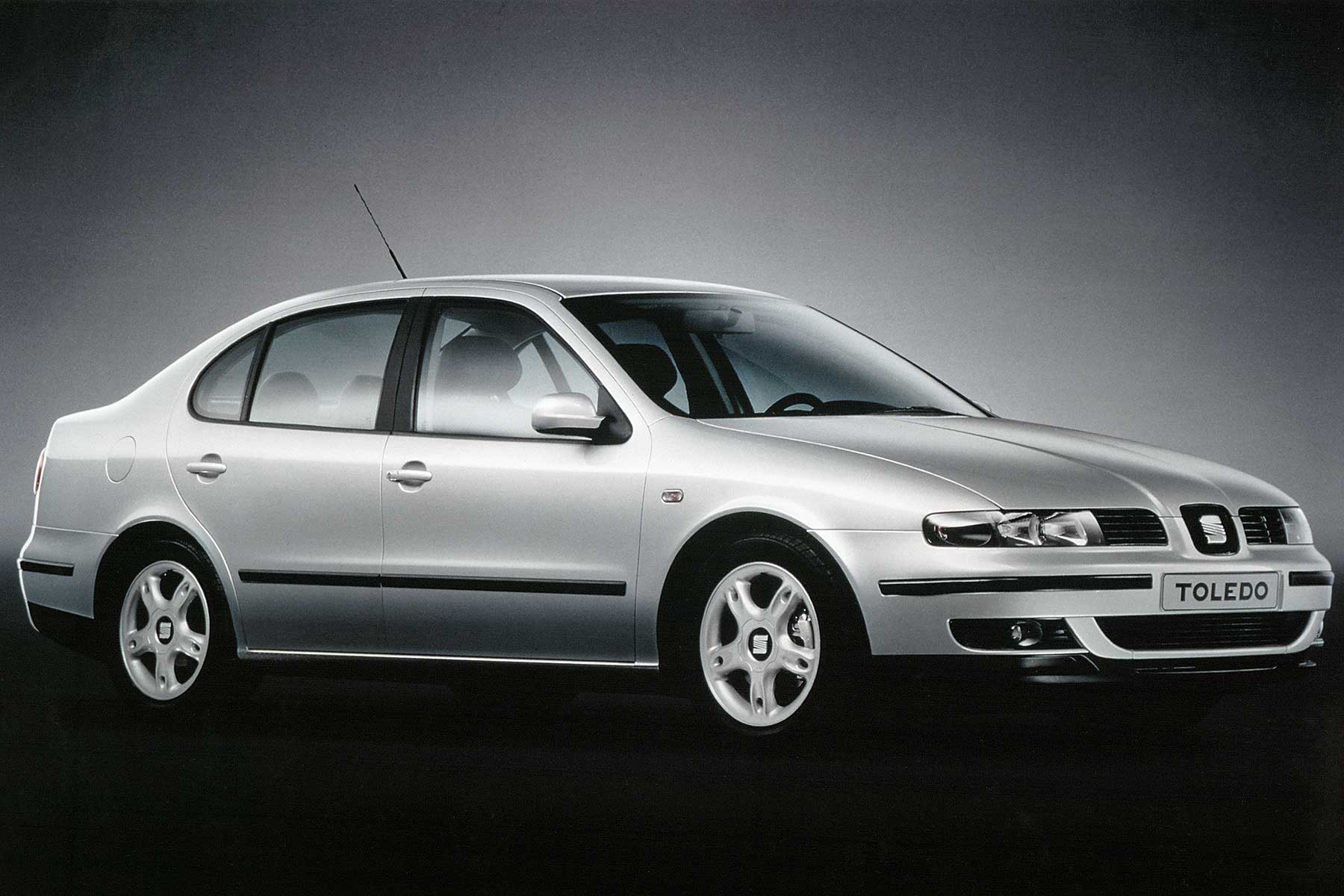 But it was less distinctive, despite the option of a 2.3 litre Volkswagen V5 engine that made for a subtly swift machine. Keen prices and a tempting pile of equipment produced a good package, especially as it was reliable. And like the previous Toledo, its boot was enormous, once again endearing it to Spanish cabbies.

But in Britain this Toledo was completely overshadowed by its Leon sister, the handsome look and performance orientation of this hatch one of the high-points of Seat’s short history.

Sportiness, and big boots then. SEAT was becoming known for both by the time this second-generation Toledo was in production, but the brand was also becoming known around the car industry as the Volkswagen Group’s problem child. Lack of profit was the issue, and a shortage of ideas on how to make one.

Most of the brands in VW’s ever-growing portfolio had long histories and a strong sense of the kind of cars they should be making. SEAT, by contrast, had started life as a licensed builder of Fiats during the early 1950s, and while it had occasionally gone its own way during this era, most impressively with the 1975 1200 Sport coupe – still a pretty thing today – it was more an assembler than a creator of cars.

The 1982 break-down of its relationship with Fiat produced one-and-a-half cars of its own making, the half being the SEAT Ronda that was an obvious evolution of then Fiat Strada that it had just finished making. The entire car was the 1984 Ibiza, this the first SEAT developed during its brief period of independence, albeit with substantial help from ItalDesign and Porsche, whose engineering consultancy helped developed the car’s so-called ‘System Porsche’ engines. By this point the company was already making Volkswagens, the two companies rapidly edging closer until VW took a 51% share in 1986.

But having allegedly decided to head this way, the company then proceeded to produce a series of family-oriented models, starting with the Altea, a not unattractive cross between a hatchback and a higher-riding MPV. Then came the Mk2 Leon, and shortly after that, the third Toledo series.

All of which has several things in common beyond their Volkswagen Group platforms and powertrains. Which was that they were essentially the same car, but of different heights and lengths. The trio shared the same nose, all had flanks sporting an unmissable descending crease line vaguely suggestive of sportiness and all three were the work of a Walter da Silva-lead design team that included British designer Steve Lewis. Lewis had a major influence on the trio’s design, and would later become SEAT’s design boss.

Both the Leon and Altea were good-looking designs with some contemporary flair. The Toledo, by contrast, was less happy. Most of it was the same as the Altea for budget reasons, severely limiting the designers’ scope, but in order to provide it with a reason to exist they had to add the Toledo’s trademark big boot. And from the rear there was no mistaking that it had a very large booty indeed, its back-end protruding like J Lo’s, if rather less arrestingly.

What it looked more like, in fact, was the back-end of another big miss from Europe’s car industry during the early part of this century, in the unfortunate shape of the Renault Vel Satis, an executive car that has almost finished sinking without trace. And the 2005-08 Toledo looks like heading the same way.

Although the Altea robbed it of many customers, the effect of the third-generation Toledo’ arrival was much the same as jabbing a balloon with a knife. Functionally it was great, providing a boot big enough for an ambitious camping holiday – or multiple balloons – but buyers weren’t interested.

After the collapse came a hiatus, while SEAT wondered what to do next. The answer came with the opportunist 2012 Toledo, otherwise known the Skoda Rapid, the two near-identical. And both have big boots.

Now that SEAT is pursuing family SUVs, it’s quite possible that the Toledo will fade out, and with it a once major piece of Spain’s car-making history. But the Toledo’s best year was its first, when the Mk 1 sold an impressive 106,000 copies – many more than the Mk 3 managed during its entire back-end blighted life.

Austin Maxi: the mini revolution that never was

The Austin Maxi could have, and probably should have, been great. Sadly, even before launch, some were questioning it...
Read more
Great Motoring Disasters

In 1974, Triumph broke with tradition and launched its wedge-shaped TR7 sports cars. The advert claimed it was ‘The shape of things...
Read more
Great Motoring Disasters

Too much success can stunt the mind. That can apply to the collective mind of a company just as easily as it...
Read more
Previous articleSaab: a slow, accidental death
Next articleVauxhall Belmont: one disappointment on top of another

You think a Volkswagen Up GTI is the best affordable car for a twisty road? Pah...
Read more