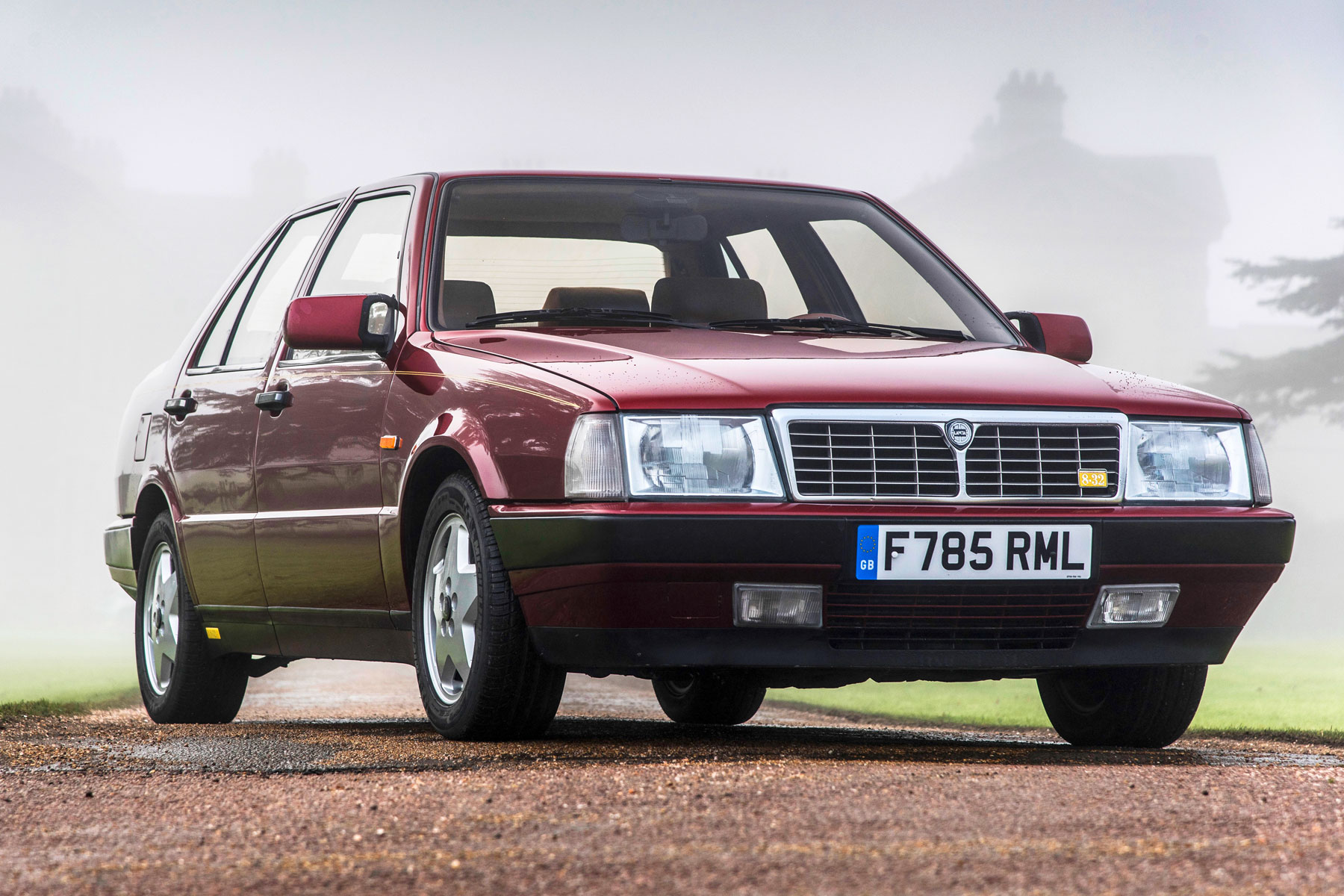 Make no mistake, the Lancia Thema 8.32 was an extraordinary car. Let not the flow of wisdom and common sense convince you that a Thema Turbo would deliver many of the benefits without some of the inevitable headaches, because the 8.32 is a car devoid of levelheadedness and logic. Instead, let us celebrate the fact that Lancia – the self-proclaimed ‘Most Italian Car’ company – had the vision to build it.

More specifically, we can thank Vittorio Ghidella for the ‘four-door Ferrari’. The former Fiat boss – a man credited with rescuing the company from financial ruin and described as “a car man through and through” – created a separate production line at the San Paolo plant, where the 8.32 was built alongside the regular Thema.

At its heart was the 2927cc, 32-valve V8 engine, cast by Ferrari in Maranello, assembled by Ducati, and shipped to Lancia in Turin. It was the same unit found in the Ferrari 308 Quattrovalvole but revised and detuned for its unlikely appearance in the four-door saloon.

So while the 308 QV developed 240hp, the 8.32 offered a more saloon-like 215hp at 6,750rpm and 209lb ft of torque at 4,500rpm. Respectable figures, but not enough to keep up with the contemporary BMW M5 or Sierra Sapphire Cosworth, even if the lighter Ford was down on power.

This 1989 Lancia Thema is owned by actor, comedian and renowned classic car enthusiast, Rowan Atkinson.
With less than 20 examples currently registered, this Series 1 will be offered at “No Reserve’ and could well be the bargain of the sale. More info – https://t.co/7j8eS2FDpe pic.twitter.com/wYShWgEyAS

More context is provided by the Thema range starting price, which kicked off at £12,495 for the 2000ie, with the 135mph Turbo LX available for £17,500. In today’s money, an 8.32 would nudge six figures. And you thought they were asking a lot for the Alfa Romeo Giulia QV, also known as today’s ‘four-door Ferrari’.

Madness, you might think, but there was no shortage of suitors for this elegant Italian. Lancia was basking in the warm glow of success on the world rally stage, with the Delta Integrale, 037 and Stratos HF injecting the kind of motorsport pedigree other brands could only dream of.

It didn’t matter that the understated Italdesign styling was mostly unchanged – this was part of the appeal. A Thema 8.32 could blend into its surroundings with consummate ease, with little to suggest there was a ‘Lancia by Ferrari’ engine sitting beneath the bonnet.

The cover would soon be blown if the driver took the Thema to its 149mph top speed, while the mellow chatter of the V8 would provide a more audible clue to the car’s potency. That said, it remains one of the greatest Q-cars of all-time: the ultimate Lupo vestito da Pecora.

Other giveaways included the stainless steel radiator grille, the small yellow 8.32 badges, the sill skirts, front air dam with integral fog lights, five-spoke alloy wheels and a retractable rear spoiler, which would appear from within the boot lid when driven at speed. 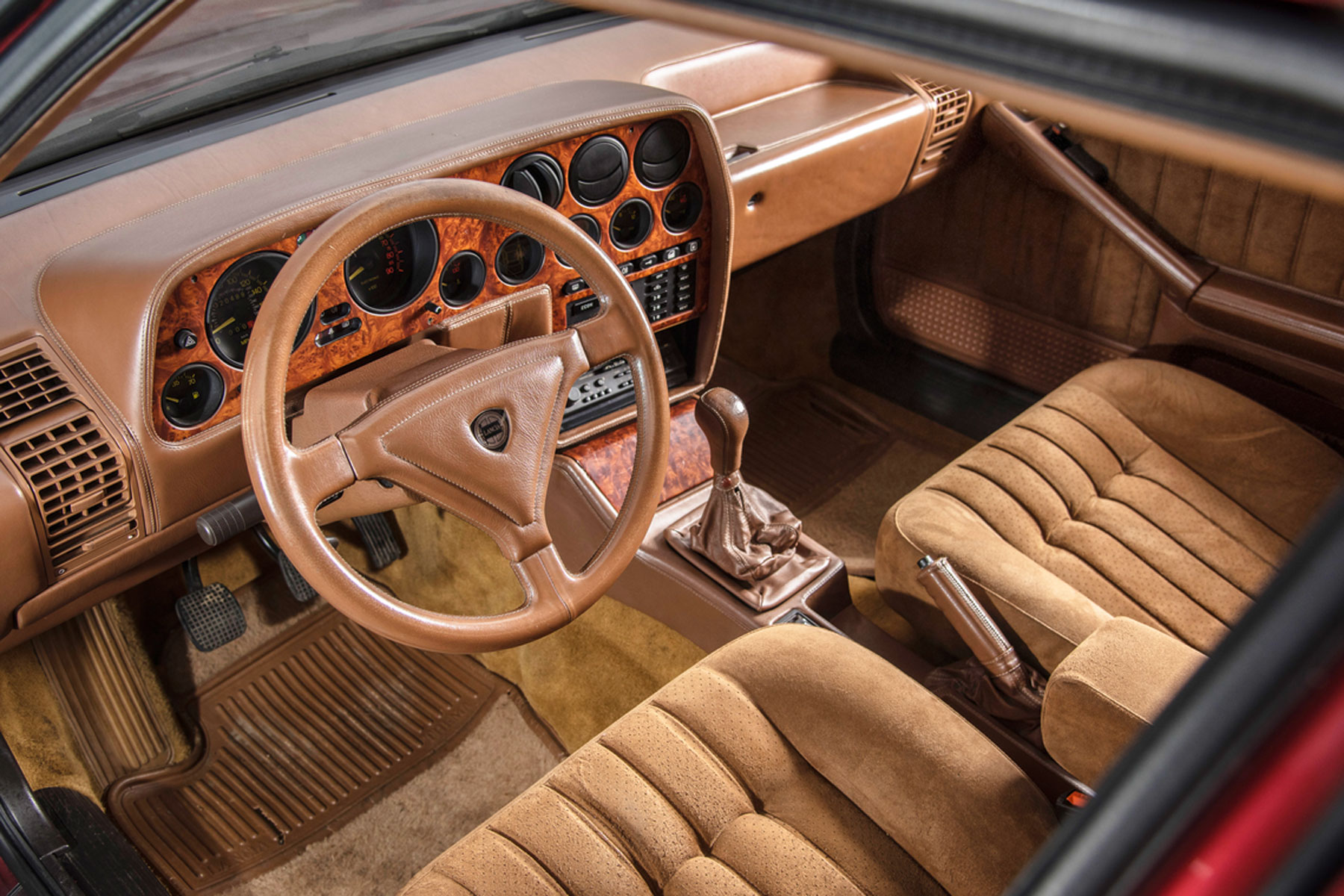 Inside, the changes were more elaborate but far from ostentatious. Satin-finish walnut adorned the dashboard, the tops of the doors and the ashtray, having arrived in crates at the Turin factory.

The rest of the interior was swathed in the most exceptional Poltrona Frau leather or velour, giving buyers a hint of a time when Lancia could stand shoulder-to-shoulder with the luxury elite. As a monument to mark the subsequent decline of this once great marque, the 8.32 is almost without peer.

Even at £37,500, it’s doubtless that Lancia would have raked in the lira on this halo model. The front-wheel drive Thema was developed alongside the Saab 9000, Fiat Croma and Alfa Romeo 164 as a European four-door family saloon. Nobody in their right mind would have raised the prospect of crowbarring a Ferrari engine beneath the bonnet when the Type Four platform was first discussed.

It was a snug fit. The engineers were forced to create a removable inner panel within the right-hand wheel arch simply to allow for access to the belts for the power steering pump and alternator.

A comprehensive package, then, but not enough for the 8.32 to out-muscle a BMW M5 or Audi Quattro, both of which were cheaper and offered more for the enthusiastic driver. But to label the 8.32 as a mere also-ran in the battle for contemporary performance car supremacy would be to miss the point. The Thema 8.32 was about so much more than speed and cornering prowess.

It’s about the finer details, like the gold and yellow pinstripes, handpainted by a Torinese worker with incredibly steady hands, possibly before a typically Italian lunch. Also, note the range of instruments inset behind the lavish walnut dash. At night, the illuminated dials create a wonderful spectacle, assuming no troublesome warning lights are on display. Buyers could also order a car telephone, along with stereo headphones for rear passengers, presumably if they’d had enough of listening to the redolent sound of the Ferrari V8.

The Thema 8.32 was, if you like, Lancia at its bonkers best. Not as bombastic as the rallying heroes, and perhaps not as well-appointed as cars from Lancia’s luxury heyday, but as a demonstration of what we know and love about the marque, it’s unquestionably up there with the very best. 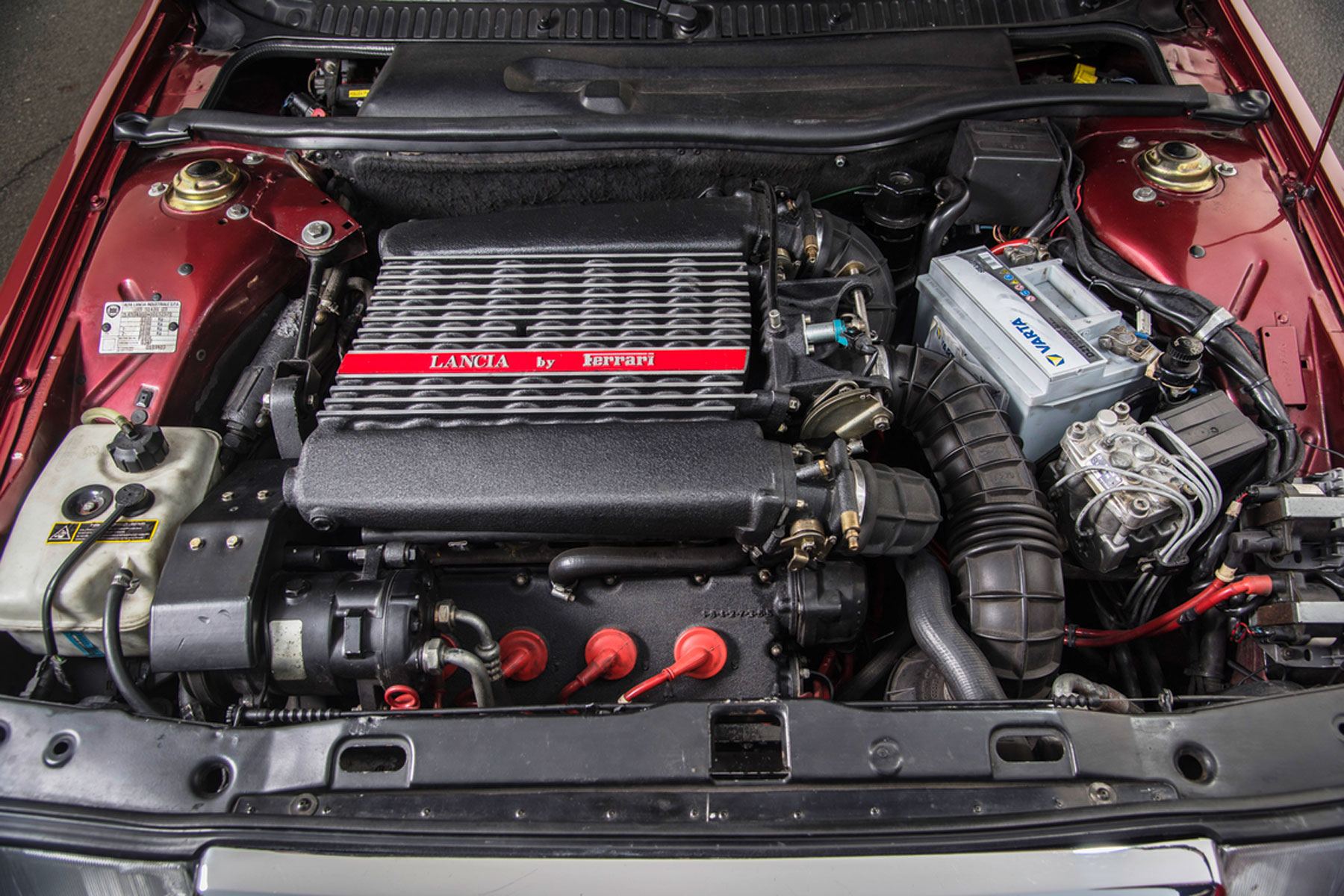 Which is why the presence of Rowan Atkinson’s 1989 example at the forthcoming Race Retro Classic Car Sale should set hearts a fluttering and the sudden urge to check on the progress of your ISA. The auction star – for which there is no reserve – has barely turned a wheel in the seven years Atkinson has owned it and is thought to be one of 20 registered and taxed in the UK.

According to Silverstone Auctions, the actor has “spent a considerable sum maintaining and improving the car”, with a history file showing closing to £20,000 in bills. This figure will either encourage you or send you scurrying back to the sanctum of auction 205 GTis and fast Fords.

But an 8.32 should be no more troublesome than a Thema Turbo, and the low-stress V8 should actually be more reliable if it has been maintained to a high standard. And you’re hardly going to use it daily, which means the fuel economy is unlikely to be an issue.

Perhaps, like Rowan Atkinson, you have a cunning plan to purchase the car, merely to say you own a Lancia Thema 8.32. And why not: we would happily while the away the hours in those rich and sumptuous velour seats.

An extraordinary vehicle from the most Italian car company on earth. They don’t make them like they used to. And boy, do we miss Lancia.

After years of Seat hot hatches, Cupra has become a standalone car marque, with a focus on sporty performance and style. We tell its story so far.
Read more
Features

Terrific tin-tops: the retro cars that made the BTCC a...

With the 2020 British Touring Car Championship finally underway, we take a look at some of the classics that have graced the grid
Read more
Features

On the 30th anniversary of the end of Citroen 2CV production, we take a look at the long and varied history of the Deux Chevaux.
Read more
Previous articleHow the Range Stormer prepared the world for the Range Rover Sport
Next articleIs this steam-powered Land Rover the most British thing ever?

20 retro classics for sale on Auto Trader for less than £1,500
Read more
News

As Seat launches its new Cupra sub-brand, we look back at the 2010 Leon Cupra R
Read more
Cars