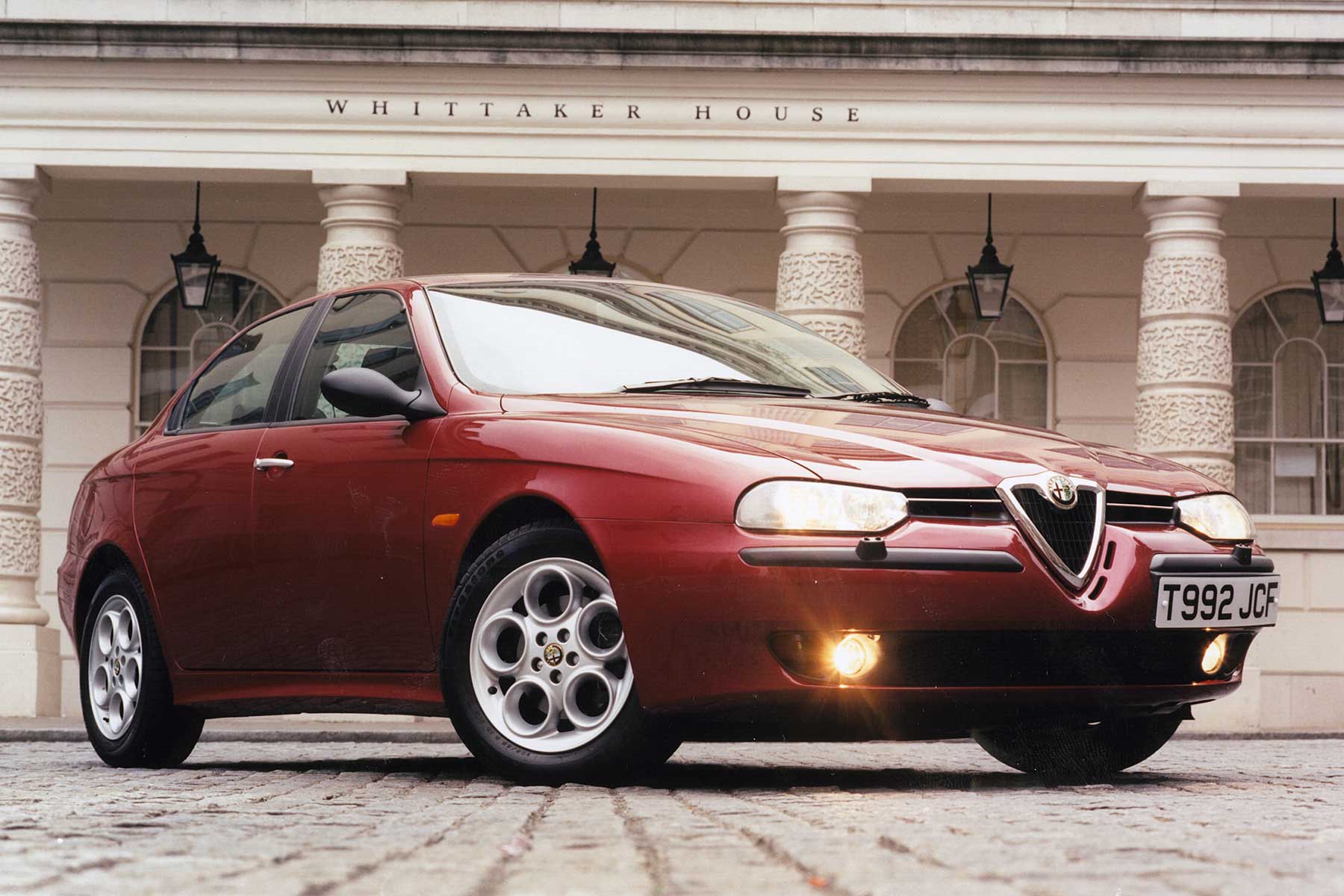 Cast your mind back to the 1990s. Just when we were thinking that every new saloon was as tedious as a rush-hour queue, along came the Alfa Romeo 156 and made us all think again.

In motor industry-speak a saloon is a three-box car – the bonnet is one box, the passenger compartment another and the boot the third – and there have been legions of dull examples over the decades, many from Britain, many more from Japan and a sizeable heap from the U.S. too.

By the mid 1990s, Europe’s preference for the hatchback had long been dominant. The few remaining saloons came from premium manufacturers, their higher quality, often sporting intent and a slice of brand sheen making a BMW 316i a whole lot more appealing than a Sierra Sapphire or a Toyota Carina E.

But when the Alfa 156 appeared in 1997, it was impossible not to breathlessly conclude that the three-box saloon had become massively desirable all over again, simply because it was so shapely.

There was the obvious appeal of the famous Alfa Romeo three-piece grille, which had displaced the numberplate to one side in an intriguing arrangement not seen on a car in decades. There was the almost voluptuous surface of its flanks, the creases floating above its wheels fading to nothing as they blended into the smooth, ground-bound curve of the doors. The Alfa’s tail was quite abruptly cut, its lights a pair of soft-cornered, horizontal parallelograms to create a back-end almost as appealing as the front.

Those taillights were just one example of the 156’s fine detailing which also included recessed rear doorhandles. The idea here was to create the impression that the car was a two-door, an idea much copied since.

And the front handles were a retro-look pair of elegant polished aluminium grips that were hard to miss. The 156 sat well on its wheels, too, whether they were plastic covered steels or Alfa’s well-known telephone dial alloys.

A cabin free of quirks 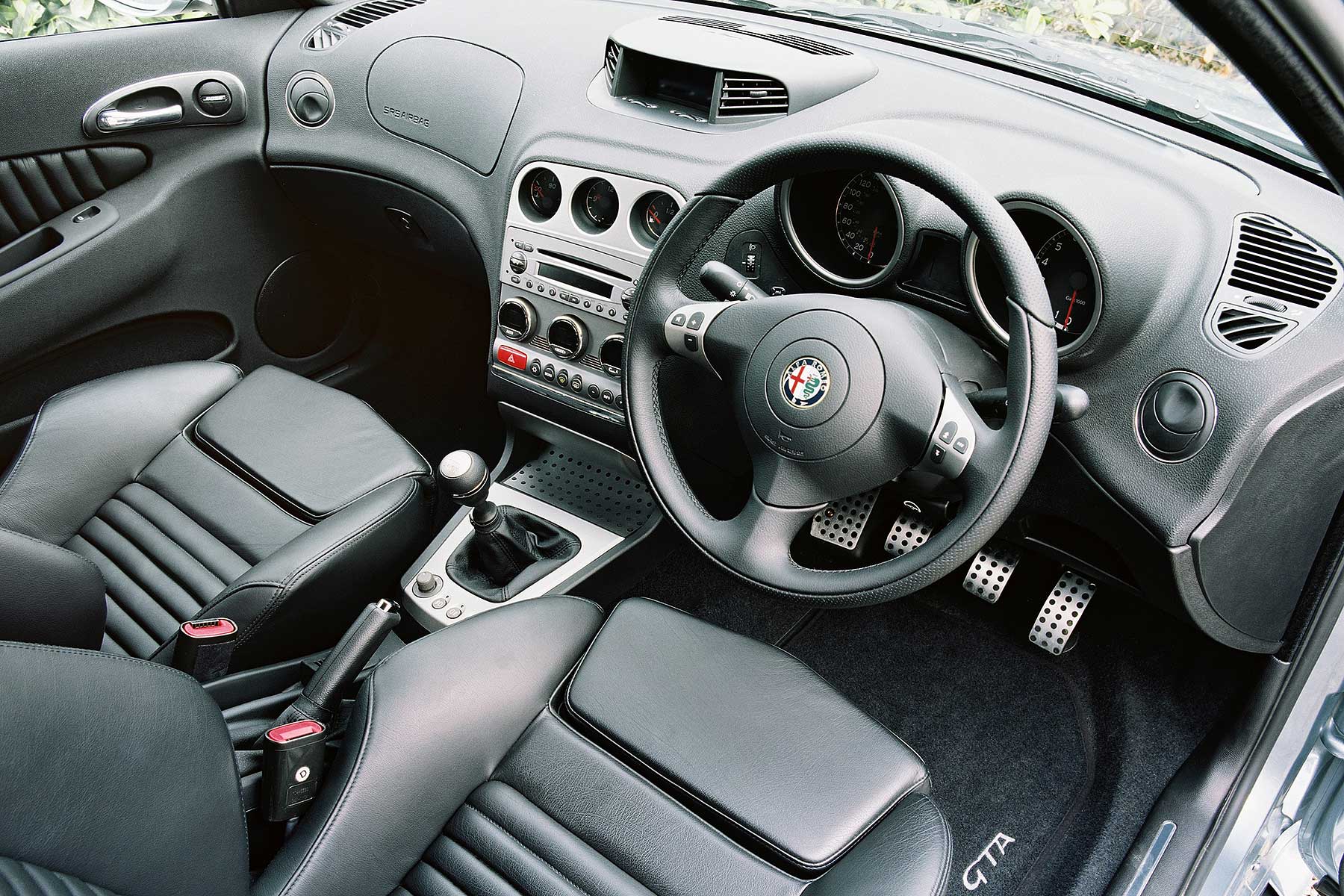 The good news continued inside. The 156’s fulsomely curvaceous dashboard was dominated by the torpedo-like twin binnacles of speedo and rev counter, its centre console topped with a trio of driver-angled minor gauges, a look referencing the dashboards of the GTV and Spider of the ‘60s.

The cabin looked well finished and free of quirks too, unlike its distant Alfa 75 predecessor with its finger-pinching U-shaped handbrake and electric window switches bizarrely mounted in the roof. Above all, though, the 156 looked tastefully sexy, just like a good Alfa should.

The car it replaced was the Alfa 155, a sorry Fiat Tipo-derived front-wheel drive device that was a lot less fun to drive than the preceding rear-drive 75. The 155 improved vastly when the so-called wide-bodied version emerged, this race-inspired version sitting on a broader track with blistered wings.

It did drive a lot better as a result, but by then there were better cars around, Alfa’s often spectacular, two-wheeling successes in the British Touring Car Championship doing almost nothing to boost sales.

The 156 shared some of the 155’s mechanical innards, including its rorty Twin Spark four cylinder engines, while the centre section of its floor came from the near-forgotten Fiat Marea saloon, but most of it was new, including the suspension.

Which consisted of exotic double wishbones up front and McPherson struts at the rear, anchored by a trio of rods per side to provide solid location and touch of rear-wheel steering in a corner. Fairly sophisticated for the day then, although the running gear’s most striking feature was steering that needed only 2.2 turns from lock-to-lock, promising a responsive car on the road.

Besides a trio of 1.6, 1.8 and 2.0-litre Twin Sparks there was also a 2.5-litre version of Alfa’s tuneful V6, and a mighty impressive diesel. It was impressive because it was fuelled using a new injector system known as common rail, the cylinders fed via this solenoid-controlled distribution tube rather than individual pumps.

The result was more accurate fuelling, which improved economy and considerably reduced a diesel’s rude clatter.

Common rail was already being used in a more mechanical form in commercial vehicles, and had been used in submarines as early as 1916, but the Alfa was the first car to feature it, and with a clever electronic control unit that heightened its effectiveness. So much so, common rail is now commonplace.

The debut of a significant new diesel technology in an Alfa might seem a bit like Jessica Ennis-Hill promoting pills for arthritis, but the system had been under development with Alfa’s parent company Fiat, and introducing it in a premium model to rival BMW and Audi was right on the money.

Right on the money was what Fiat could have been had it not passed over development of the clever part of the system – the engine’s brain – to supplier Bosch for completion. Alfa got first dibs of the system in the 156, but Mercedes followed in the same year with the C220 CDI.

It wasn’t long before Bosch has sold the system to a torrent of manufacturers to make fat profits that Fiat badly needed. It was the first strategic error around one of Alfa’s best-planned models in years, although the loss of this revenue wouldn’t be apparent for some time.

Meanwhile the 156 enjoyed a reception bordering on the rapturous. Alfa Romeo had badly needed to pull something magical out of the bag and amazingly, it had. Not only did this car look great but it drove well too, and appeared to have none of the obvious drawbacks that Alfa’s so often had.

The 156 won the 1998 European Car of the Year award and over 30 more awards besides. Customers couldn’t wait to get their hands on the keys. 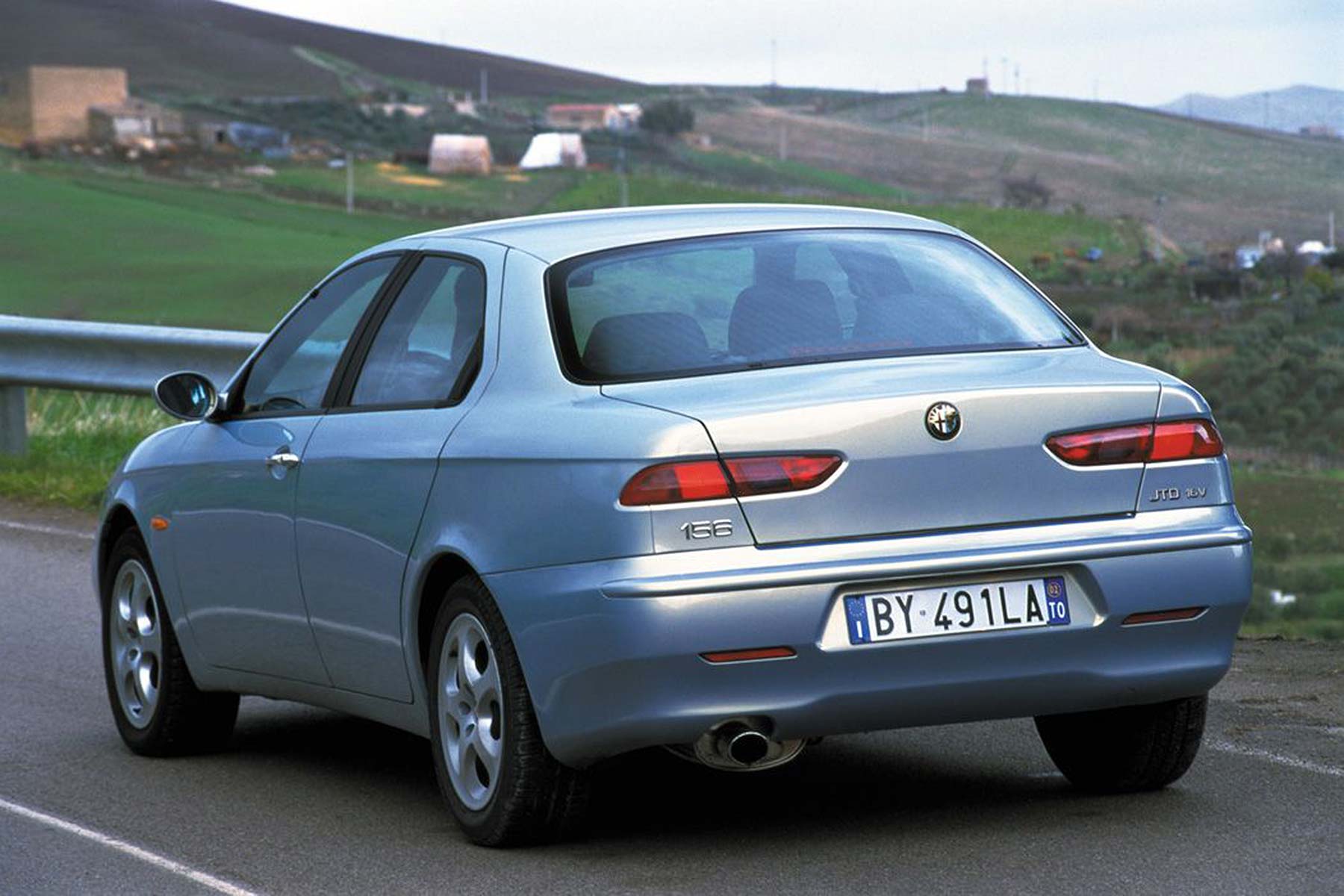 Less than two years later Alfa had already sold 365,000 examples, the 156 enjoying success that the marque hadn’t experienced since the ‘60s. More versions came of course, including an elegant (if barely more useful) Sportwagon estate, the rapid but troubled 3.2 V6 GTA and before these, a pair of automatics.

One was a conventional torque-converter transmission for the V6, the other a robotised manual called Selespeed. Its gears you could select manually via wheel-mounted buttons, or automatically by pressing the ‘city’ switch. Either way it shifted gears like a man with a peg-leg, and developed problems with a regularity that would have made the Philae lander spacecraft seem a technological impossibility for mankind.

Other problems emerged too. Misaligned suspension chewed through tyres. The rear suspension’s bushes were eventually crushed to clunking uselessness. Alfa’s once fine reputation for producing tough, long-lasting engines was being trashed by a deluge of troubles more complicated than the 156’s trim options.

Diesel engines flung off their timing belts, causing pistons to hit valves, the Twin Sparks quite often did the same, the variable valve timing system was prone to failure and the 2.0 suffered oil starvation. The Selespeed was best avoided if you didn’t want to double your trouble and the diesel versions sometimes had brake issues.

Far from every 156 was unreliable, but there were enough to have the eager buyers who had switched to Alfa Romeos from BMWs and Audis despairing at what they had done. Their doubts were only reinforced – massively – by the often ludicrous delays for spares and patchy dealer service. All of which hit the 156’s residual values as hard as filling its boot with dung. 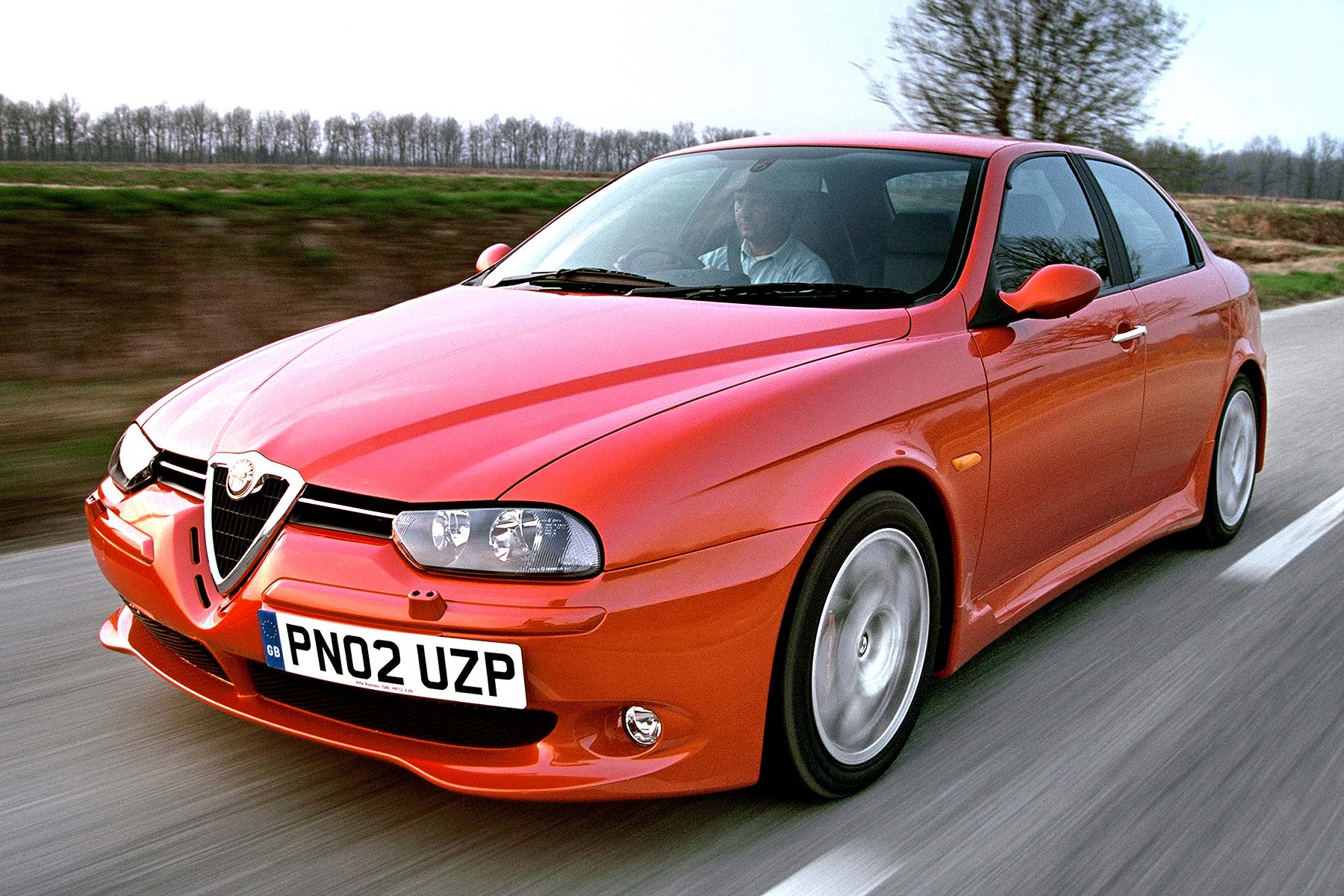 Huge damage was done to Alfa’s reputation and perversely, the more 156s it sold, the more at-risk it became. Sales began to slow, and while a neat Giorgetto Giugiaro facelift, and a new 2.0 JTS petrol engine, prolonged the decline, it was obvious that the explosion of enthusiasm shown for the car originally was depressingly misplaced. Proof of this came with launch of the 159 that replaced it.

While not as refreshingly original as the 156, the 159 was a pleasing update of the kind that any of Alfa’s evolution-oriented German rivals would have pursued. It was better finished, had more advanced engines, vastly improved safety performance and significantly greater body rigidity.

But because it was born out of a troubled development programme with General Motors, it was also too big and too heavy. Those drawbacks certainly slowed sales, but it was Alfa’s poor reliability and the often shabby way it treated its customers that mainly did for the 159.

It lived only six years to the 156’s eight, and scored 240,000 sales to its predecessor’s 650,000. The 156’s sales record is one of Alfa’s best, although its ‘60s ancestor the Giulia saloon got close with almost 580,000 sales in a much smaller market, and the smaller Alfasud topped it with over a million sales.

The 156 could have permanently revived Alfa had it been properly engineered and backed with decent service. Time will tell whether Alfa’s learned from the 156 with its new Giulia, not to mention Stelvio SUV.

The world’s first plug-in hybrid car – and why it...

MG XPower SV: the supercar that failed to save MG...

20 cars guaranteed to raise a smile for less than £5,000
Read more
Features

A Ferrari for every budget: prancing horses up for auction

From a £25,000 Mondial to a rare, racing-spec F40, there’s a Ferrari for everyone at this weekend’s Autosport International sale
Read more