It’s a hard fact to believe if you’re of a certain age, but the Ford Mondeo Mk3 is about to turn 20. Yes, the dynamic “Mondeo for the new Millennium” has now been with us for two decades.

Launched at the 2000 Paris Motor Show, the fab Ford had a lot to live up to. The original Mondeo had set new benchmarks in ride and handling, and the Mk2 facelift had shaken up its dull looks. It was Britain’s best-selling company car, loved by fleet managers and admired by drivers who – just a few years earlier – were being forced to drive ancient Sierras or (if they were really unlucky) Rover Montegos.

Suddenly, being a sales rep was fun, so Mondeo Number Three was anticipated with baited breath. It had to be bang on target and, following Ford’s incredible success with the Mk1 Focus, expectations were high. Very high indeed. 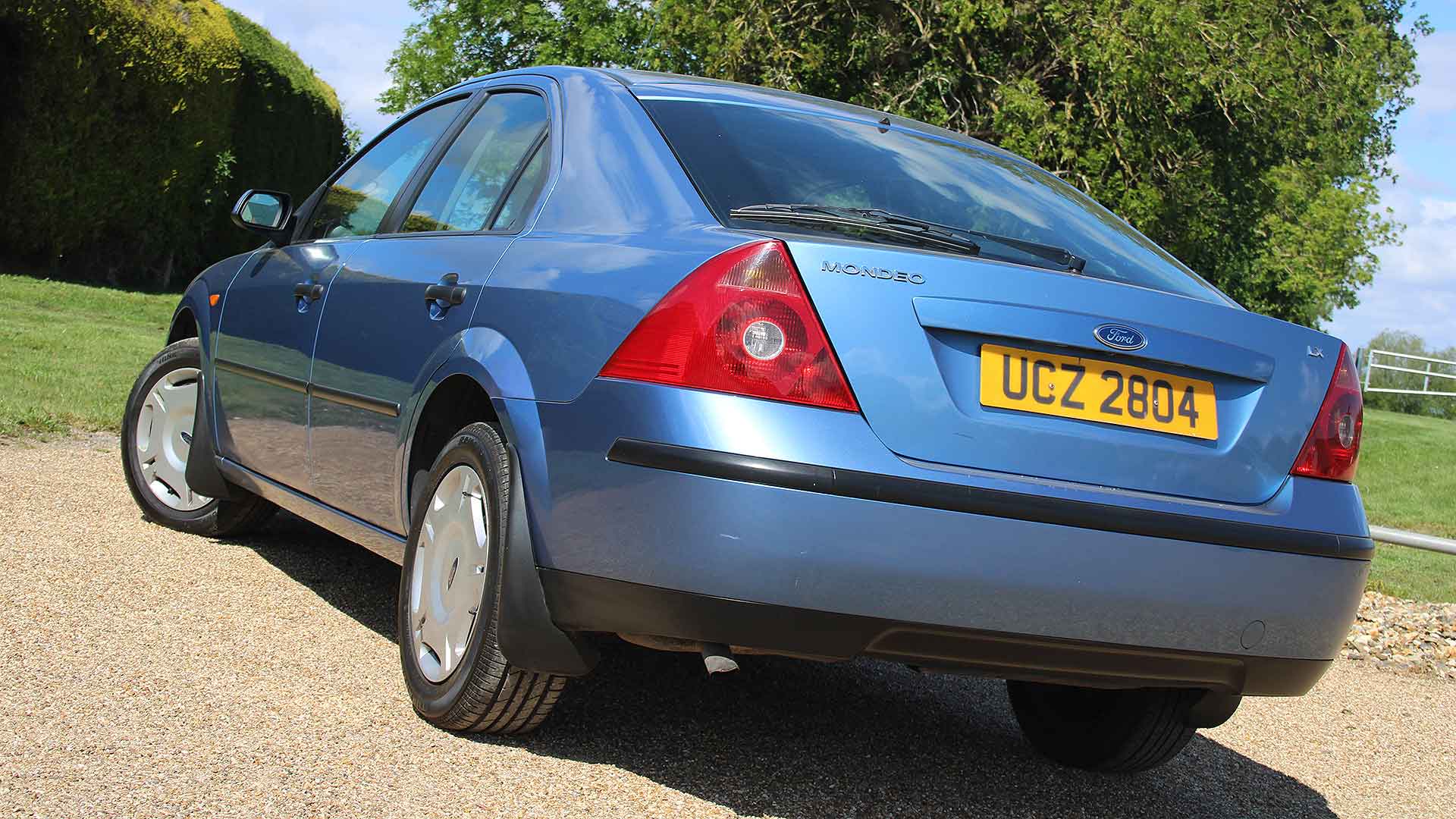 But we needn’t have worried. Even in fleet-friendly LX trim in the era where you still got hubcaps instead of alloys, the new Mondeo was a winner. The Zetec engines were largely carried over (which was no bad thing) and gave it decent enough performance, but it was the cabin quality and handling dynamics that really won the Mondeo its following.

The latter was expected – after all, its predecessor was a leader in its class when it came to roadholding. But the former was a surprise for all. Here was a Mondeo that had all of the touchy-feeliness of a premium German brand, with cabin plastics unlike anything Ford had offered before. It was a plush place to be, especially in Ghia trim with its ‘wooden’ dash, Sony stereo and decent quality leather. Mondeo Man had arrived in style, and all the toys that mattered were there. You even got cruise control on a mid-ranger. 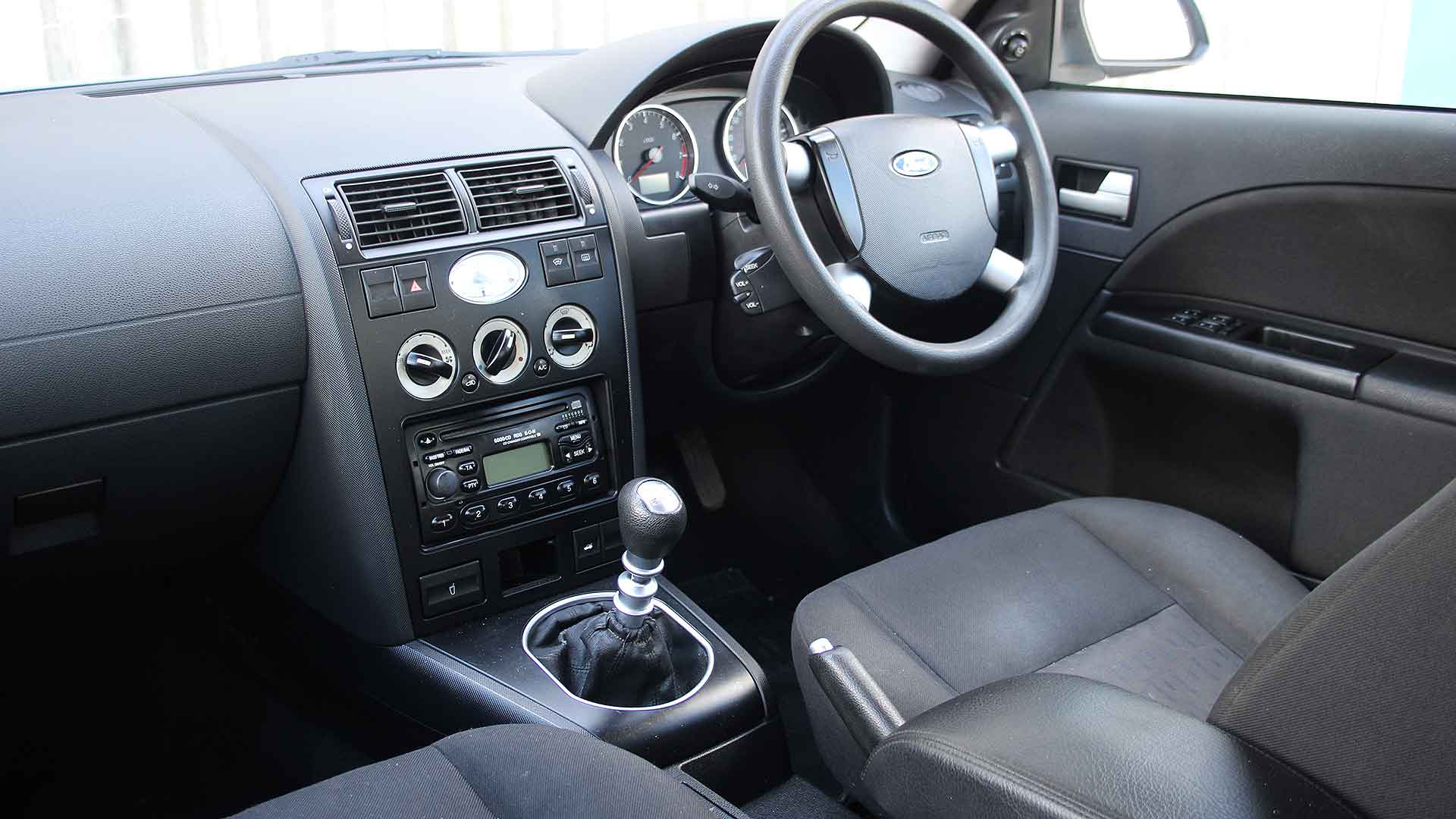 Then, shortly after the hatch and saloon, along came Mondeo Estate, a car so good that it morphed into a Jaguar. Yes folks, the X-Type (the famous Mondeo Jag) was actually based not on the luxury saloon versions of the Mondeo as you might expect, but of the photocopier salesman’s favourite. This was because the estate had much more complex underslung rear suspension, which offered greater lateral stability and a much smoother ride than that of the hatch. If you want a connoisseur’s driver’s car without anyone really noticing, bag yourself a Mondeo estate and nobody will know but you.

It mattered little that the Mondeo had its shortfalls as the overall package was great. An off-the-pace direct injection diesel while the rivals were going common-rail and less-than-perfect rear visibility were small prices to pay for what was the best-handling, smartest-looking and best-made mainstream D-Sector saloon available, and for a while the Mondeo rode on its laurels. It stormed to the top of the fleet sales charts and while it never knocked the hardly perennial Fiesta or Corsa off top spot overall in the UK, it was a big seller and contributed well to Ford’s coffers, especially when the up-to-date TDCi diesels arrived in 2002. 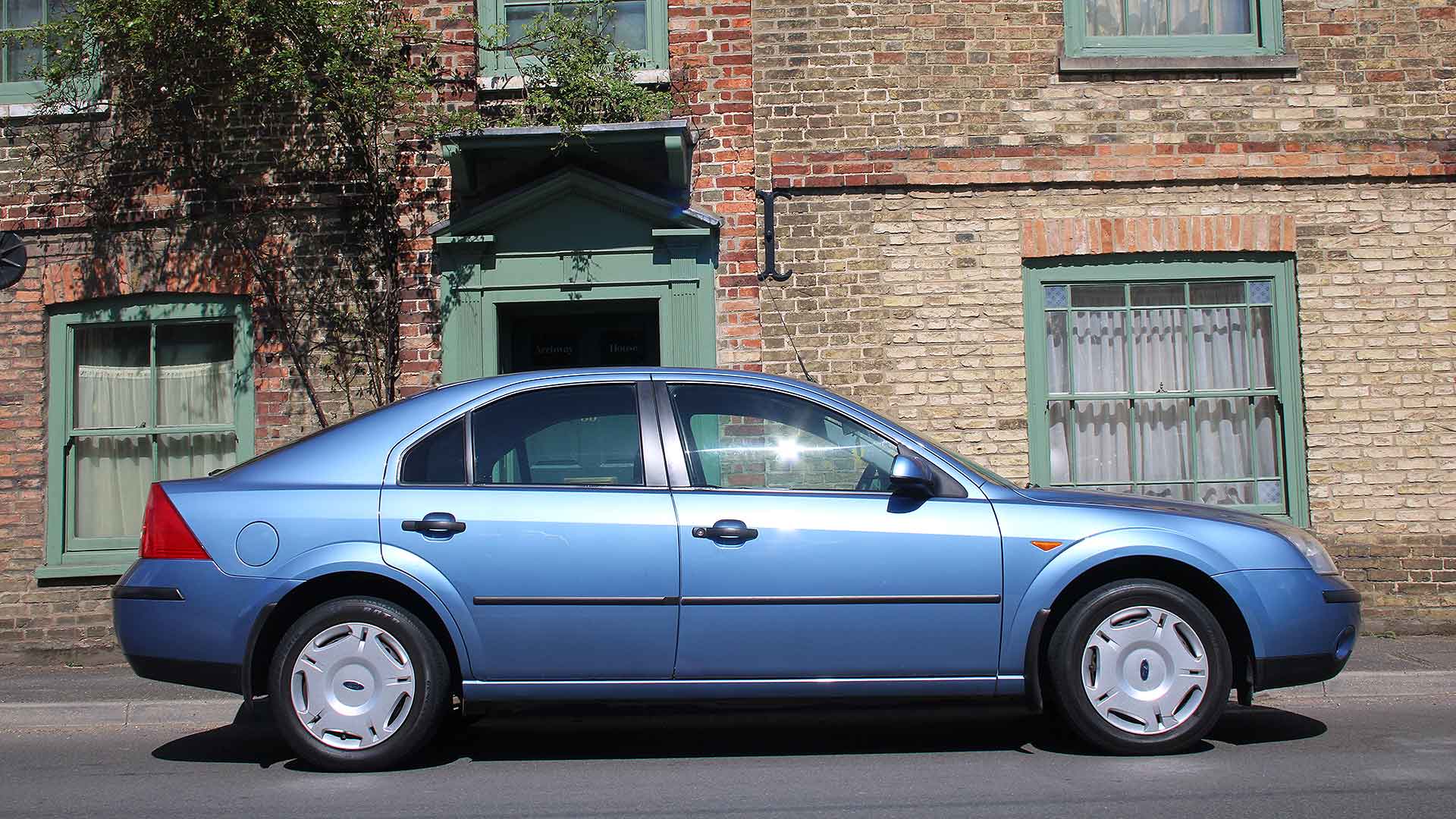 But the Mondeo’s glory didn’t last for long. First, the D-Sector reinvented itself. Soon after the Mondeo appeared, Renault appeared with its Laguna II, with space age styling, ridiculously generous cabin space, a magic carpet ride and a host of new-to-the class features such as tyre pressure sensors and keyless ignition. It was the first car in the world to gain a five-star EuroNCAP crash test rating and while it never threatened Ford’s fleet prowess in the UK, it made a big hit in Europe. As did the posh new VW Passat facelift.

In 2002, a new Vauxhall Vectra appeared and while it wasn’t the terrific car that the Mondeo was, it was a creditable rival and a more refined motorway cruiser – another car you can forget in the blink of an eye today, but which was a billion times the car its predecessor was.

If the fight for supremacy wasn’t enough, though, the Mondeo had a much bigger battle on its hands – one that threatened the entire sector. New CO2-based taxation introduced in 2001 and seismic shifts in the fleet car market suddenly made Mondeo less attractive to company car drivers. As the ‘User Chooser’ market emerged, many a Mondeo key was handed back and swapped for that of a BMW 3-Series or Audi A4 as the UK’s middle management realised it’d only be another seven quid a month on PAYE, and the traditional “D-Sector” never really recovered. 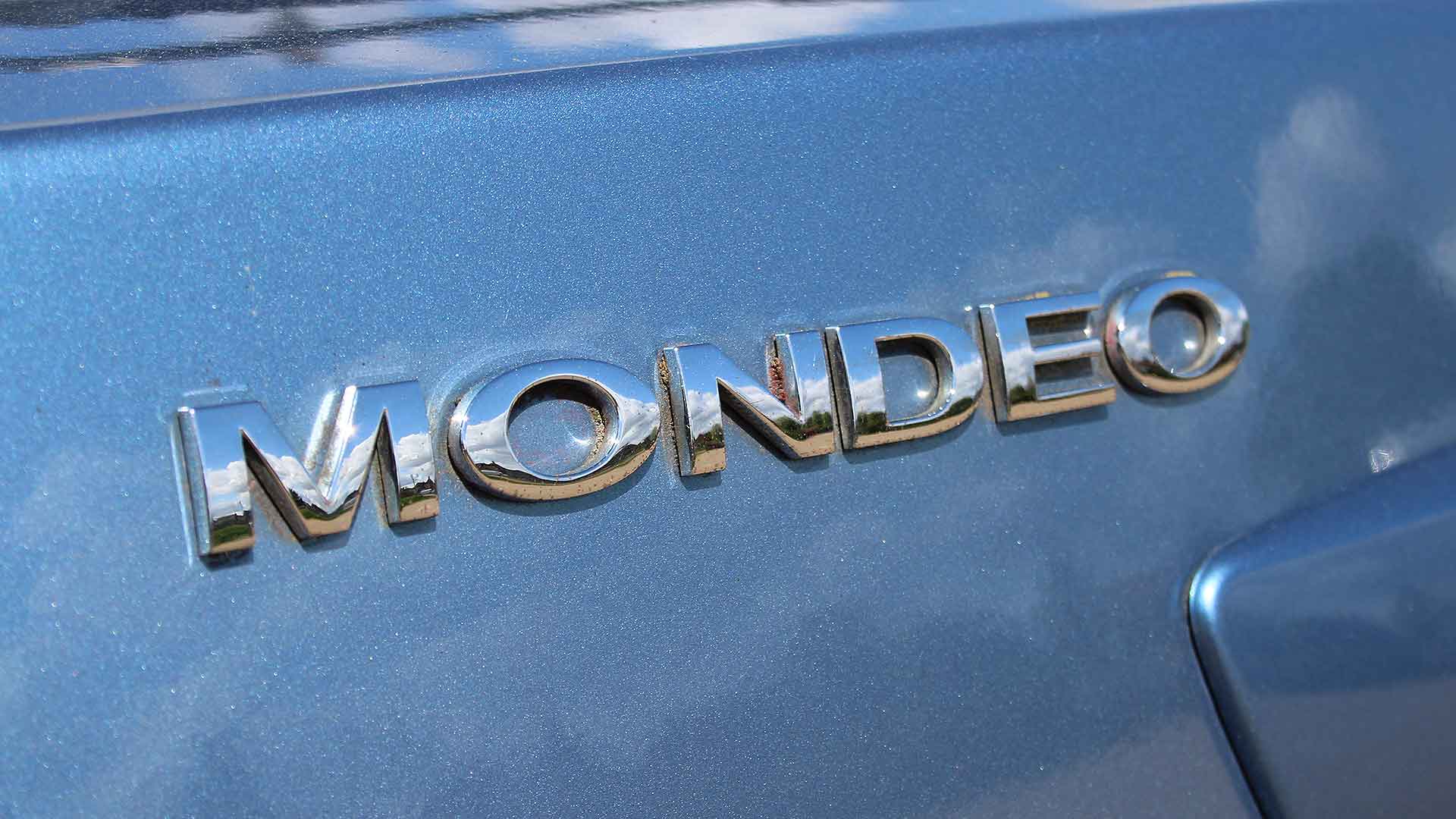 By the time the Mondeo Mk3 was put out to pasture in 2007, the car market had evolved to be almost unrecognisable from when the car was new. The business car market was owned by premium German brands and the family car arena was overrun with new compact MPVs and compact SUVs, the latter of which evolved most dominantly to become the family cars of choice (and therefore of user choosers) today. Today’s Mondeo man drives an Audi A4 if he’s on the road all day or a Nissan Qashqai if a car comes as a perk of the job.

The Mk4 Mondeo that replaced the Mk3 was a handsome and comfortable car in its own right and it deserved better than sales that dwindled year-on-year throughout its life and led to massive depreciation today. The Mk5 Mondeo, recently deceased and barely missed, was a damp squib – curious 1.0 EcoBoost variant aside. Oversized, dynamically very ordinary and not much of a looker, it filled a slot in the Ford range that the manufacturer itself was really only paying lip service to.

But the Mk3? That was Mondeo in its heyday. It wasn’t just the finest fleet car in the world – it was one of the finest cars in the world full stop. And today, a tidy one is just the ticket if you want a nice old car that never disappoints from behind the wheel… The one in the photos cost us just £300, but is still a fabulous machine to drive.

The history of the Ford Focus in pictures

Volvo 480: remembering the Euro wedge that wasn’t sensible or...

Patrick Peal, former Head of Communications at Lotus, recalls the day 25 years ago when the Elise was revealed to the world.
Read more
Previous articleFord Capri 280: the car that kept its promise
Next articleRemembering the launch of the Lotus Elise

This is a tale of desperate behind-the-scenes manoeuvrings, corporate jealousy and a slow, accidental death. A death inadvertently triggered, bizarrely, by Jaguar...
Read more

Set to be held at the Stockwell Discovery Centre, ‘Vauxhall - Made in Luton’ will see eleven models spanning more than a century of production on show.
Read more

Its name was the cleverest thing about it. Or it would have been, had the Rover marque not been so stained by...
Read more
Great Motoring Disasters