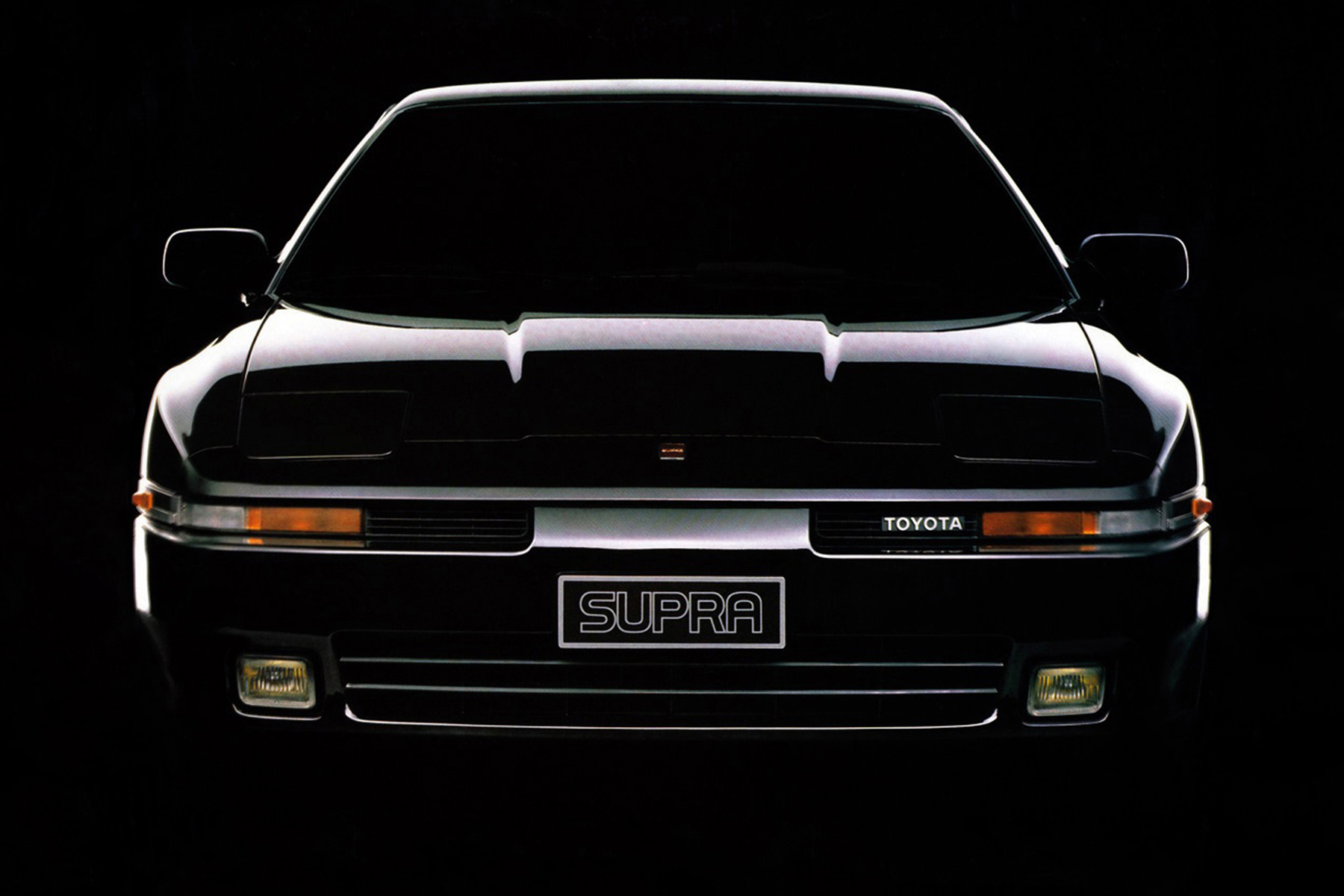 The Toyota Supra is one of Japan’s most legendary performance cars. A brawny six-cylinder sports coupé that debuted in 1978, the last Supra rolled off the production line in 2002 after 593,337 had been made.

Just in time for its 40th birthday, Toyota is about to re-invent one of its most revered cars, and the first chapter in the new Supra’s story will be told at the 2018 Geneva Motor Show. Join us as we say Konnichiwa to four previous generations of Toyota’s super Supra.

A40: the first generation 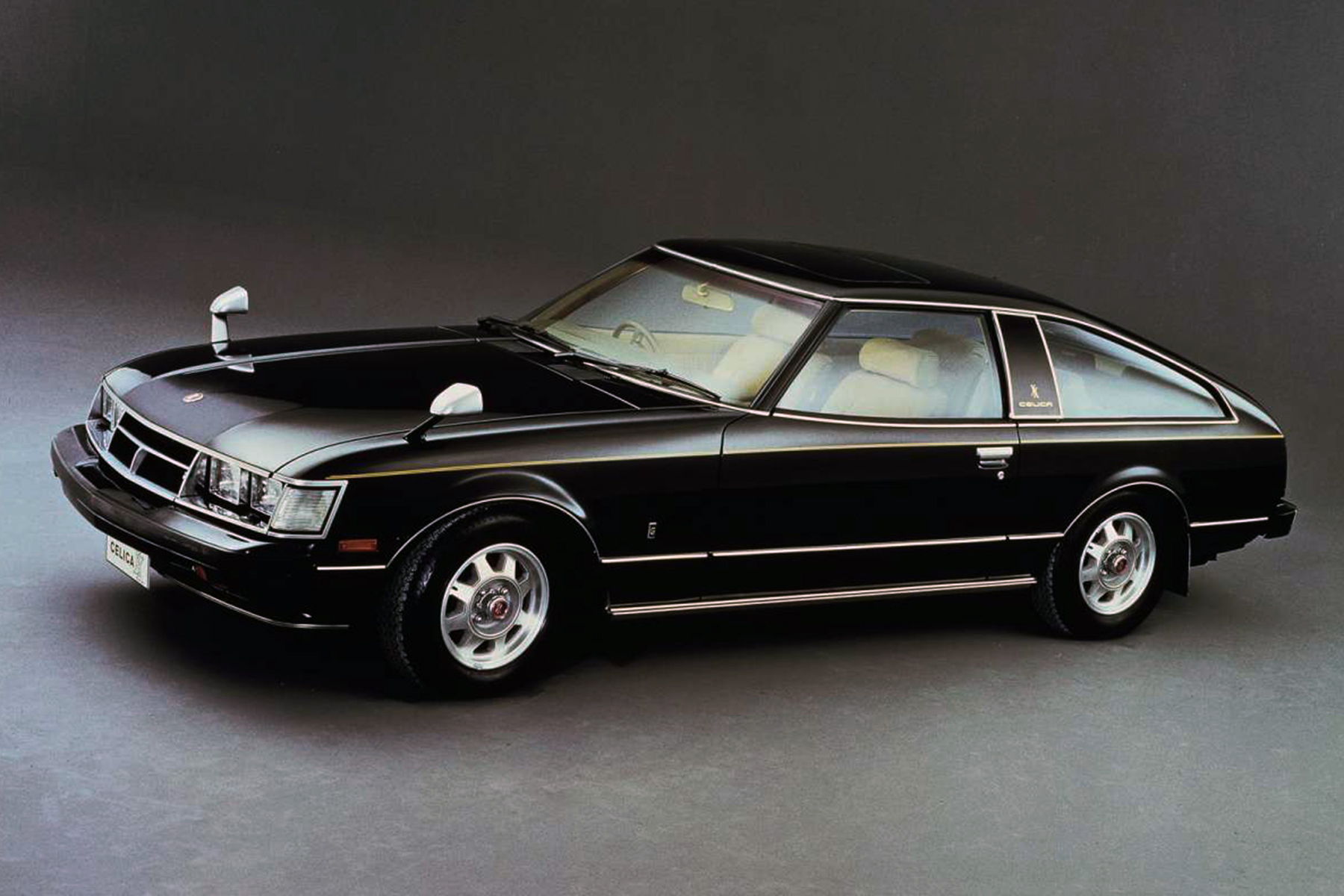 The first incarnation of Toyota’s ultimate sports coupé was actually a more powerful version of the smaller Celica. First called Celica XX, and powered by a 2.0-litre six-cylinder engine, the XX was launched in 1978. The Supra badge would arrive a year later.

A sports car legend is born 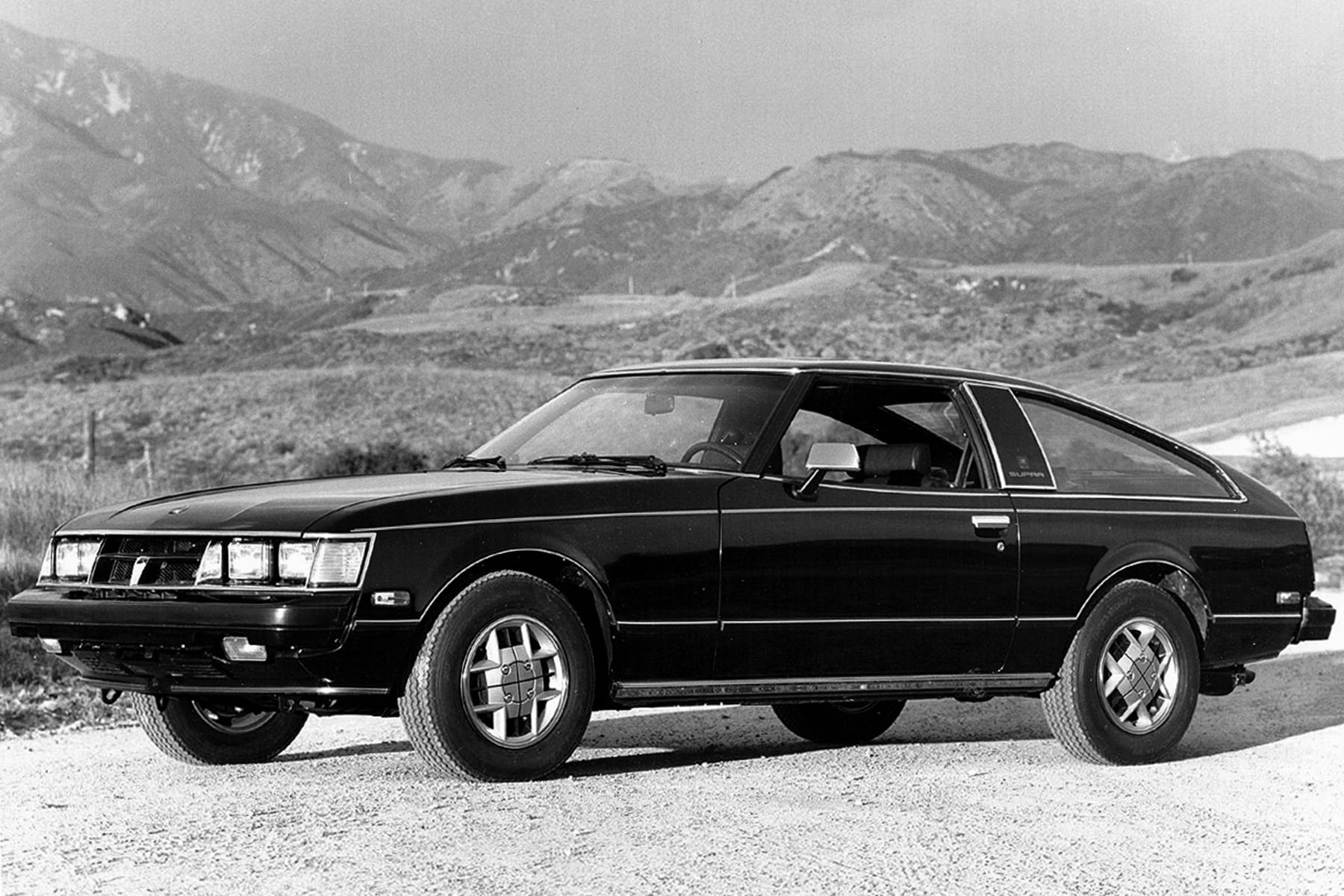 The Celica XX hit the US in 1979, and was christened Celica Supra to avoid a naming clash with a brand of beer. The legend was born. Engine size grew to 2.6 litres, but power was just 110hp. With a 0-60mph time of 10.2 seconds, it was a little more slack than super, and definitely not an out-and-out sports car. 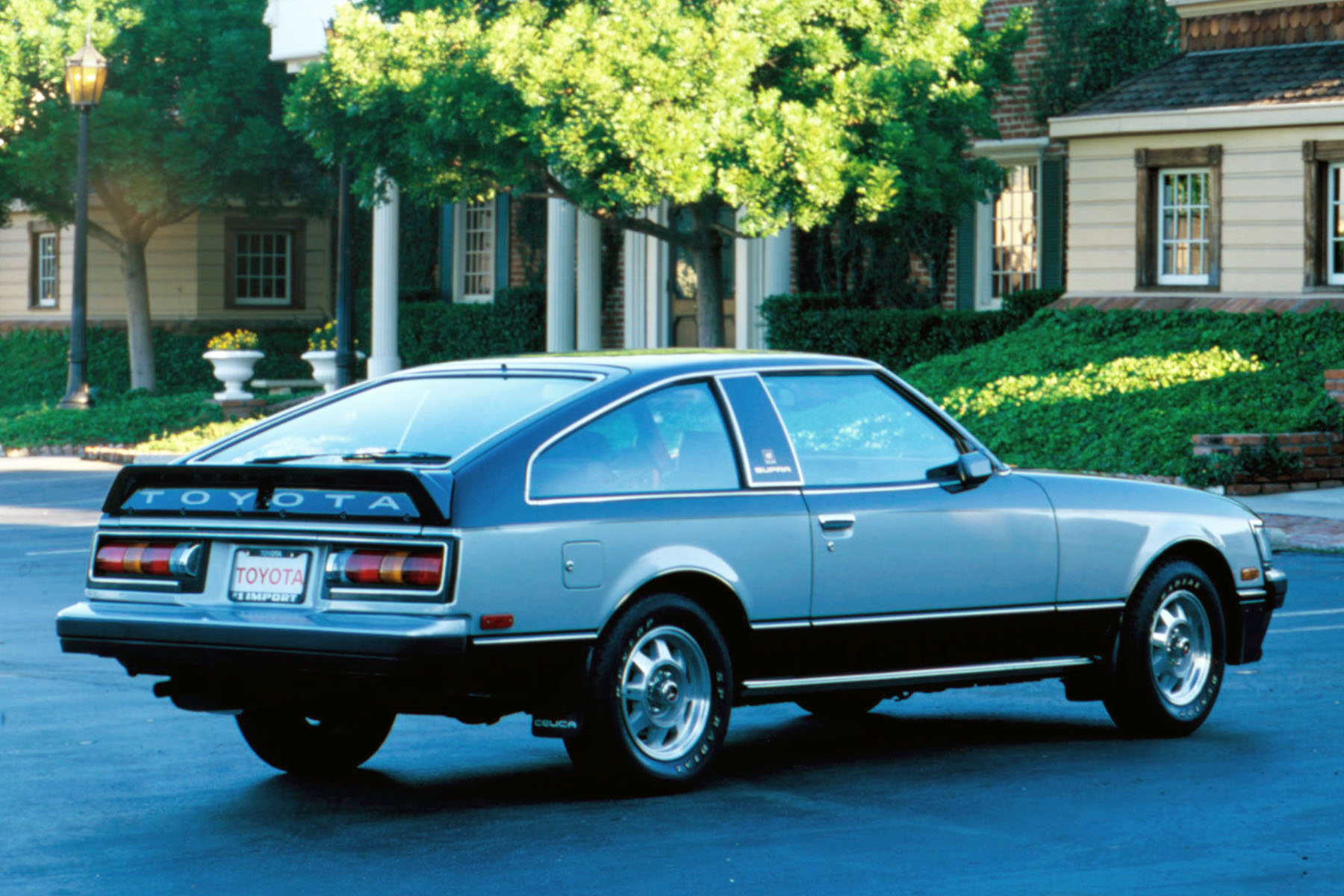 The original Celica Supra continued for another two years, aimed at the luxury end of the coupé market. Its smooth straight-six engines and high-end trappings provided Toyota with a grand tourer to take on Datsun’s established range of Z-cars.

A60: the second generation 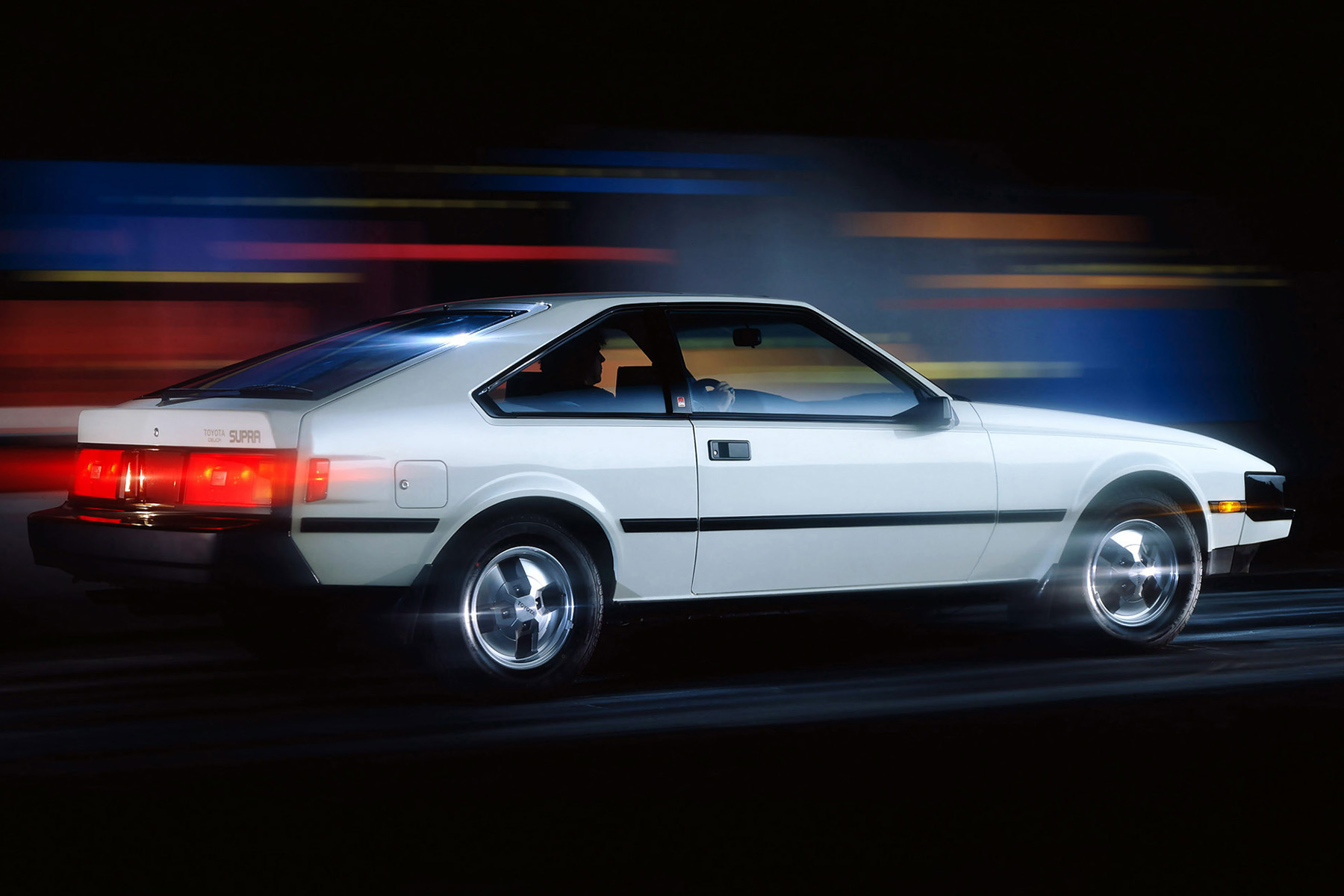 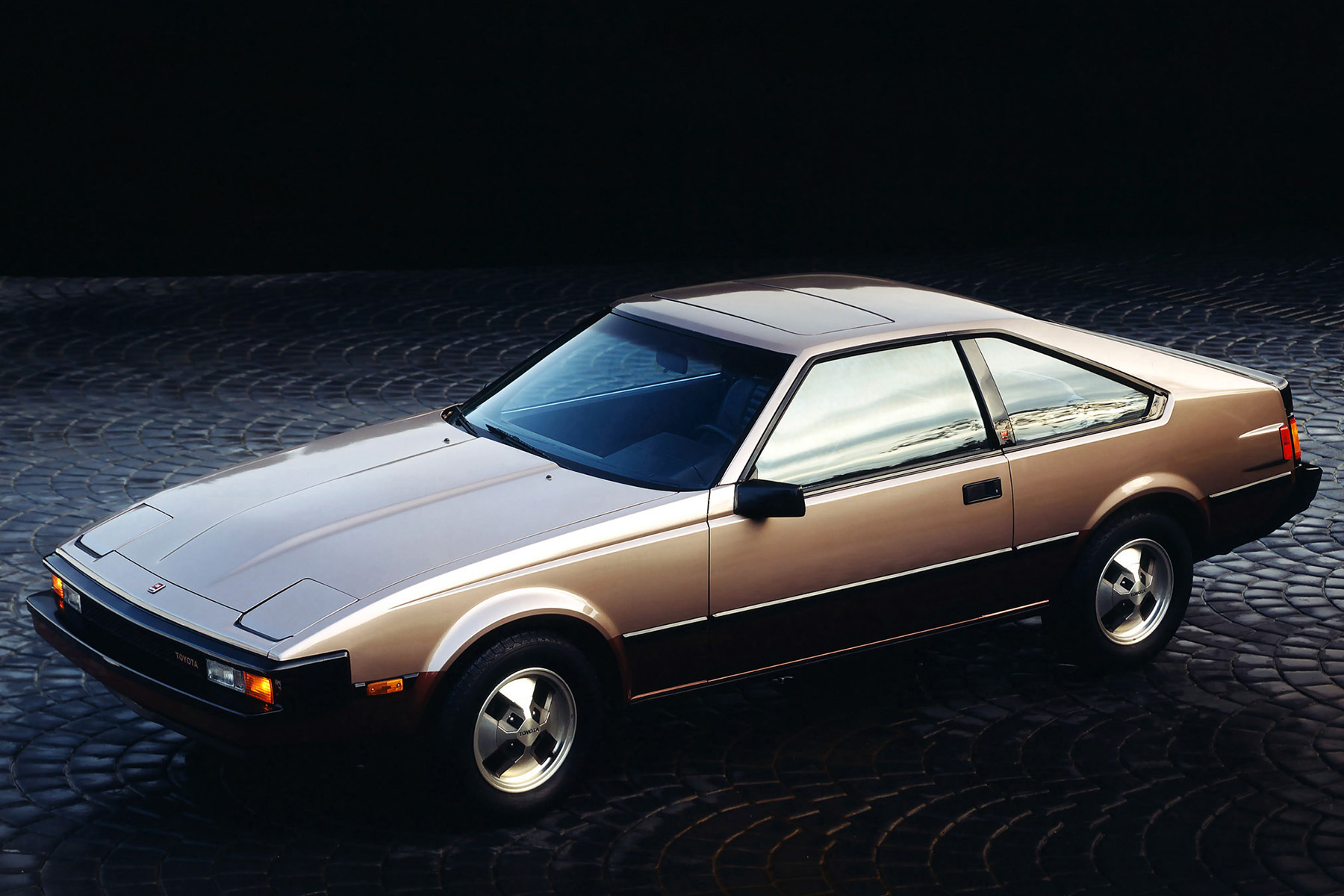 As before, though, the Supra’s longer front end allowed Toyota to drop in six-cylinder engines, including its new 145hp, 2.8-litre 5M-GE unit. A five-speed transmission was standard. Contemporary Celicas, meanwhile, still had two fewer cylinders. 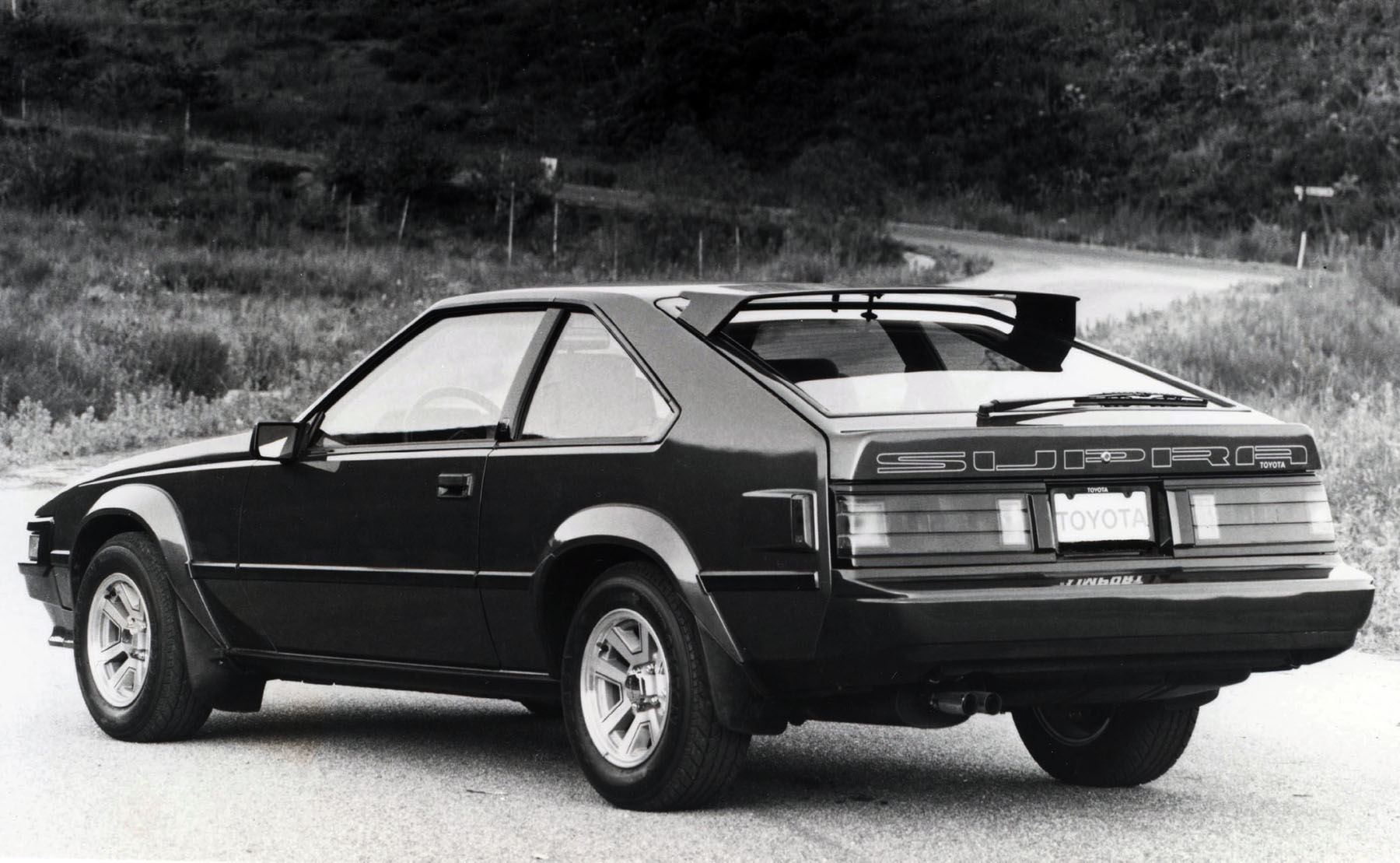 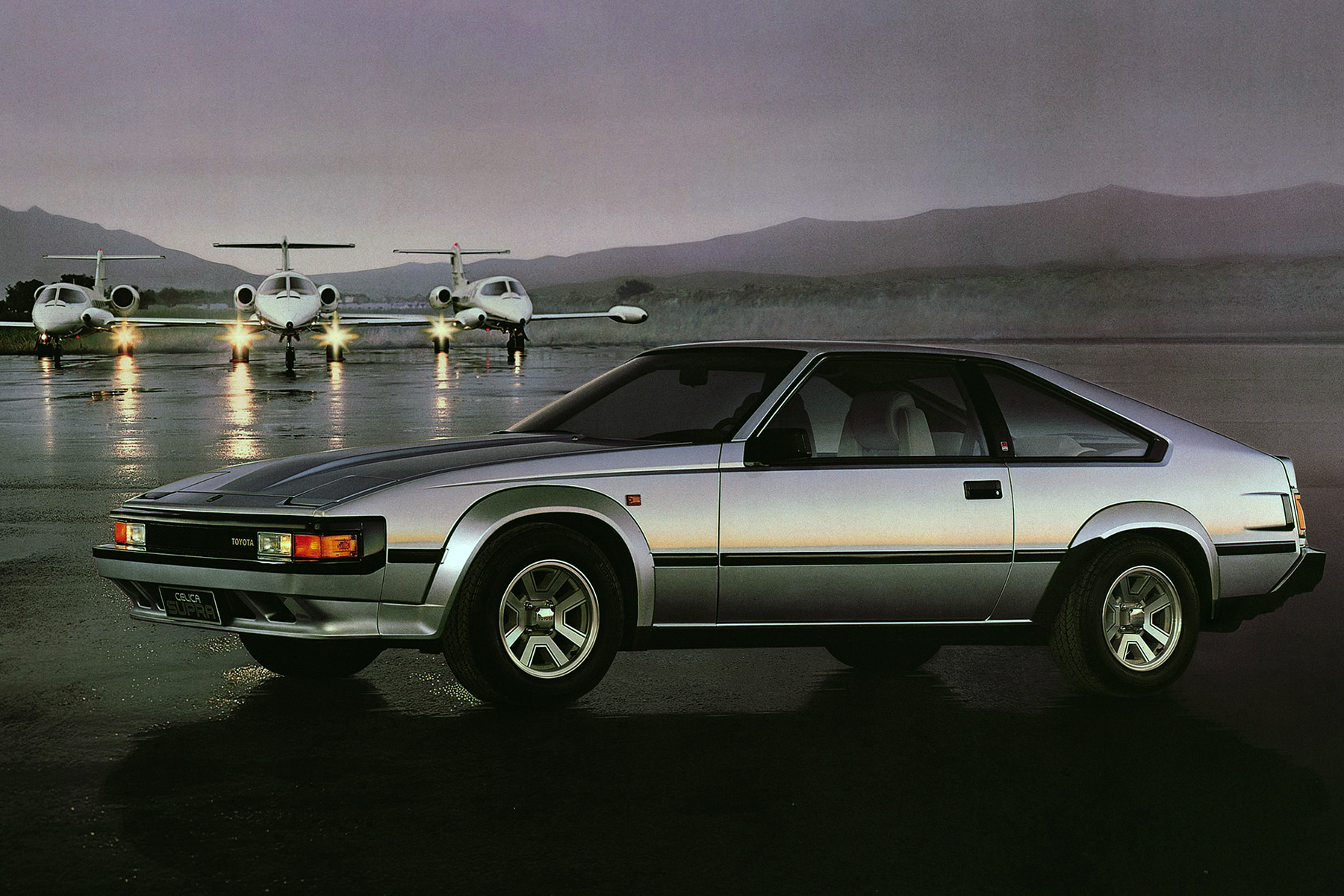 The Supra arrived in Europe in August 1982 and Toyota only brought 100 cars per month to the UK. Priced just above entry-level Porsche 924s, the Japanese car shared the German model’s front-engine, rear-wheel-drive ‘transaxle’ layout. 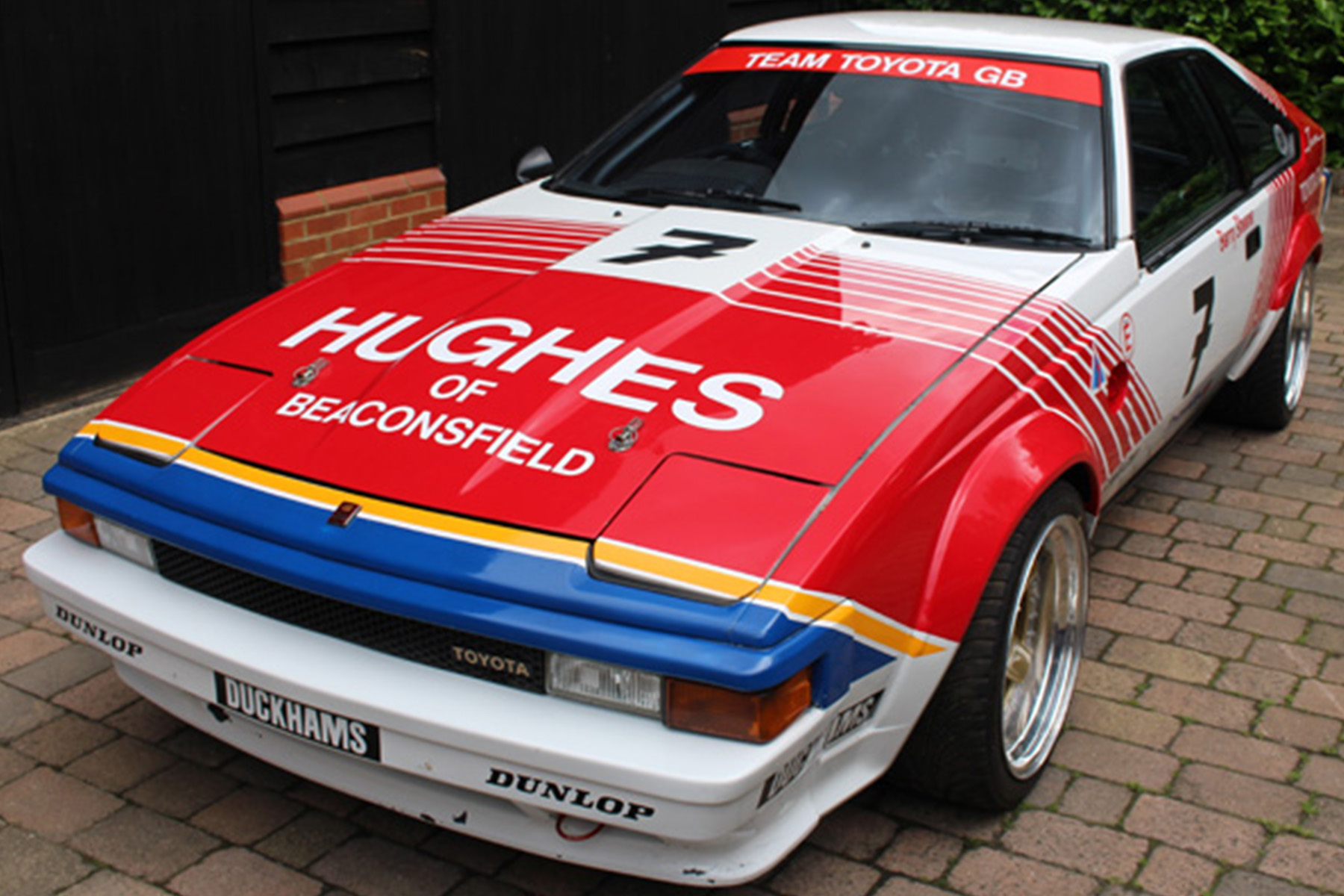 The second generation of Toyota’s big sports coupé also enjoyed success in the British Saloon Car Championship and Ulster Rally, campaigned by motorsport stars such as Win Percy, Barry Sheene and Per Eklund.

A70: the third generation 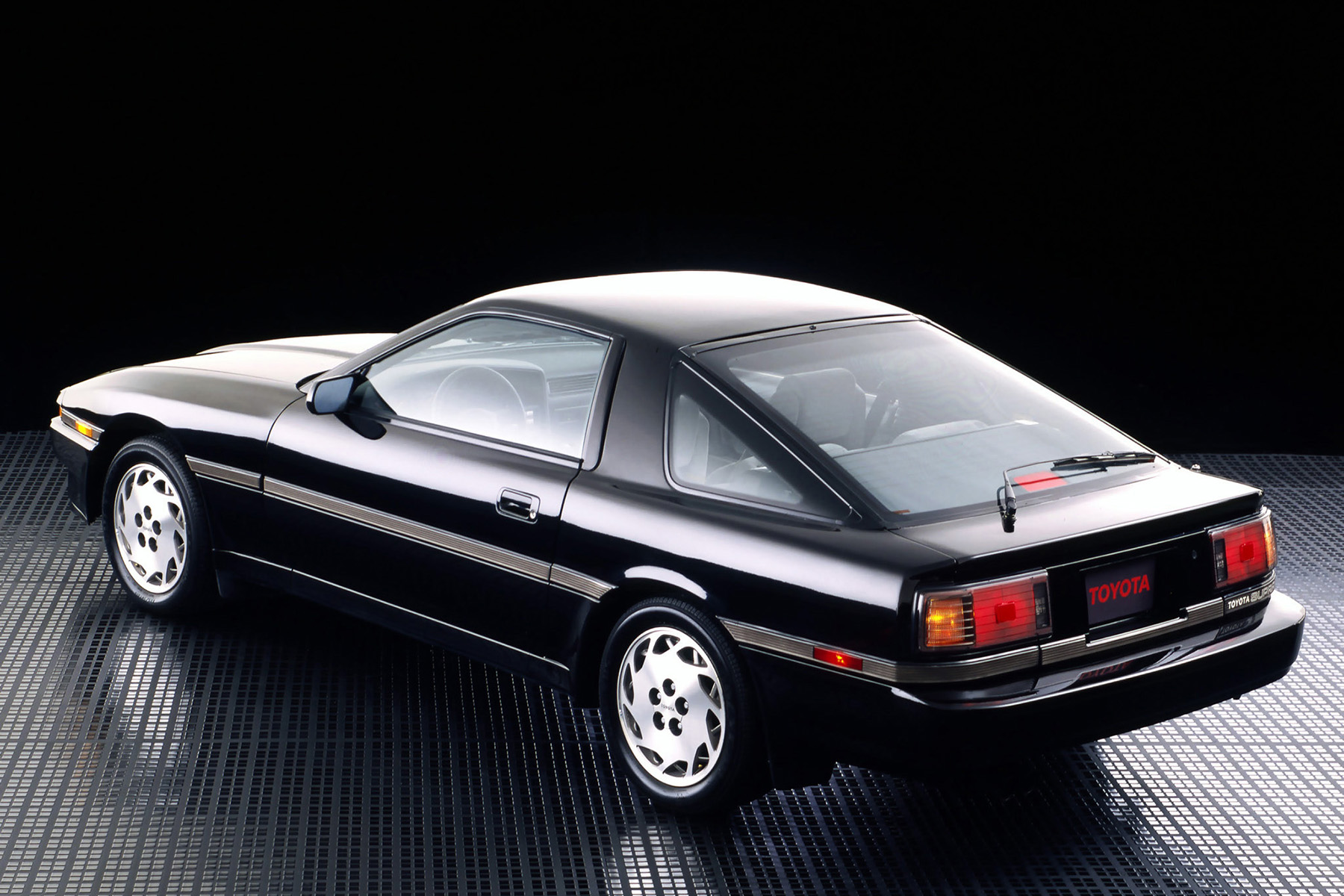 The third iteration of the Supra landed in August 1985, and moved the car on style-wise. More curvy lines lent the car an elegant, more grown-up look. The Supra also finally diverged from its Celica heritage, gaining a platform all its own. 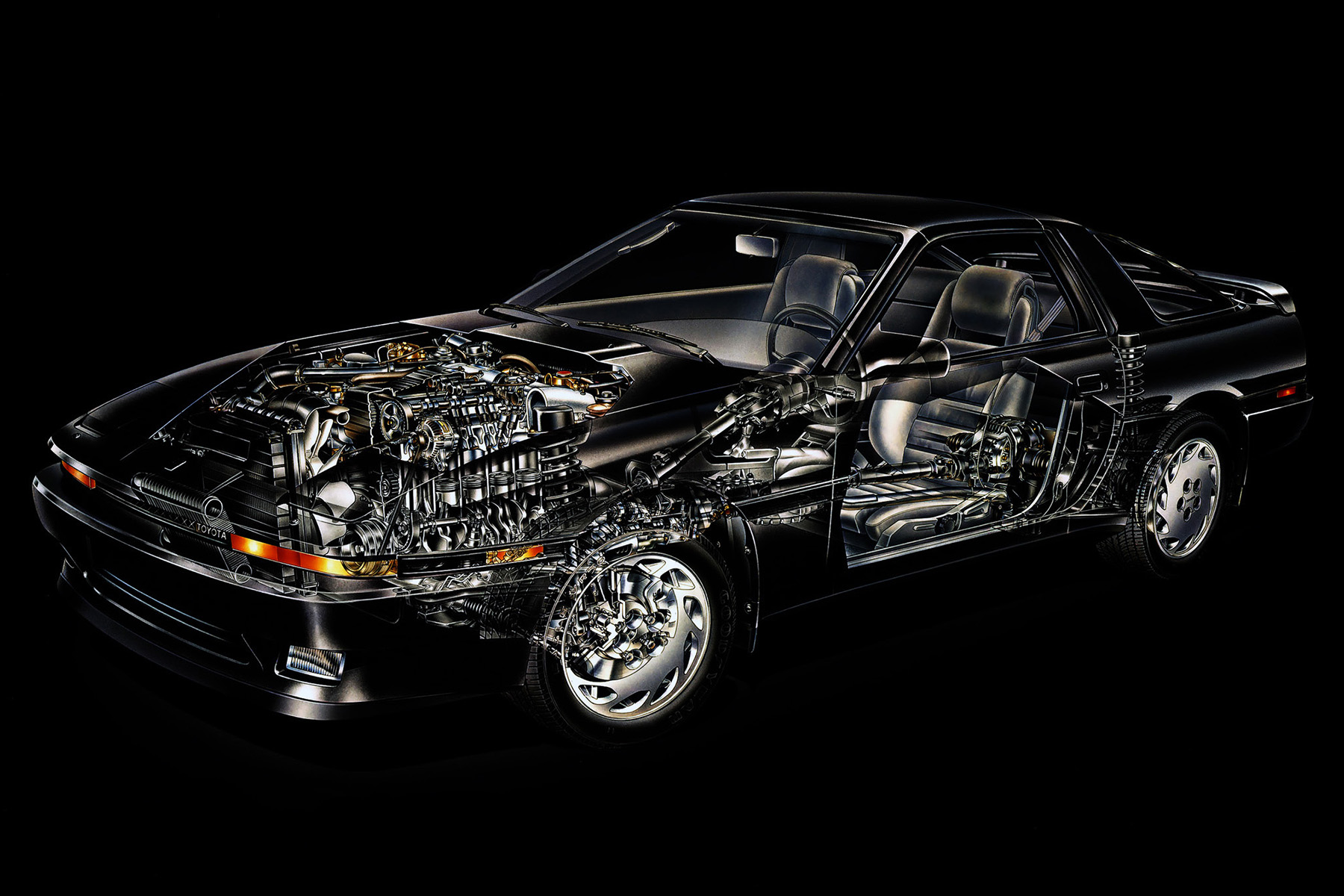 Technically, the car had moved on, too. Part-aluminium double wishbone suspension featured on every corner, attached to links that filtered vibrations entering the interior. Toyota Electronically Modulated Suspension (TEMS) was available on some models, with ABS braking across the range. 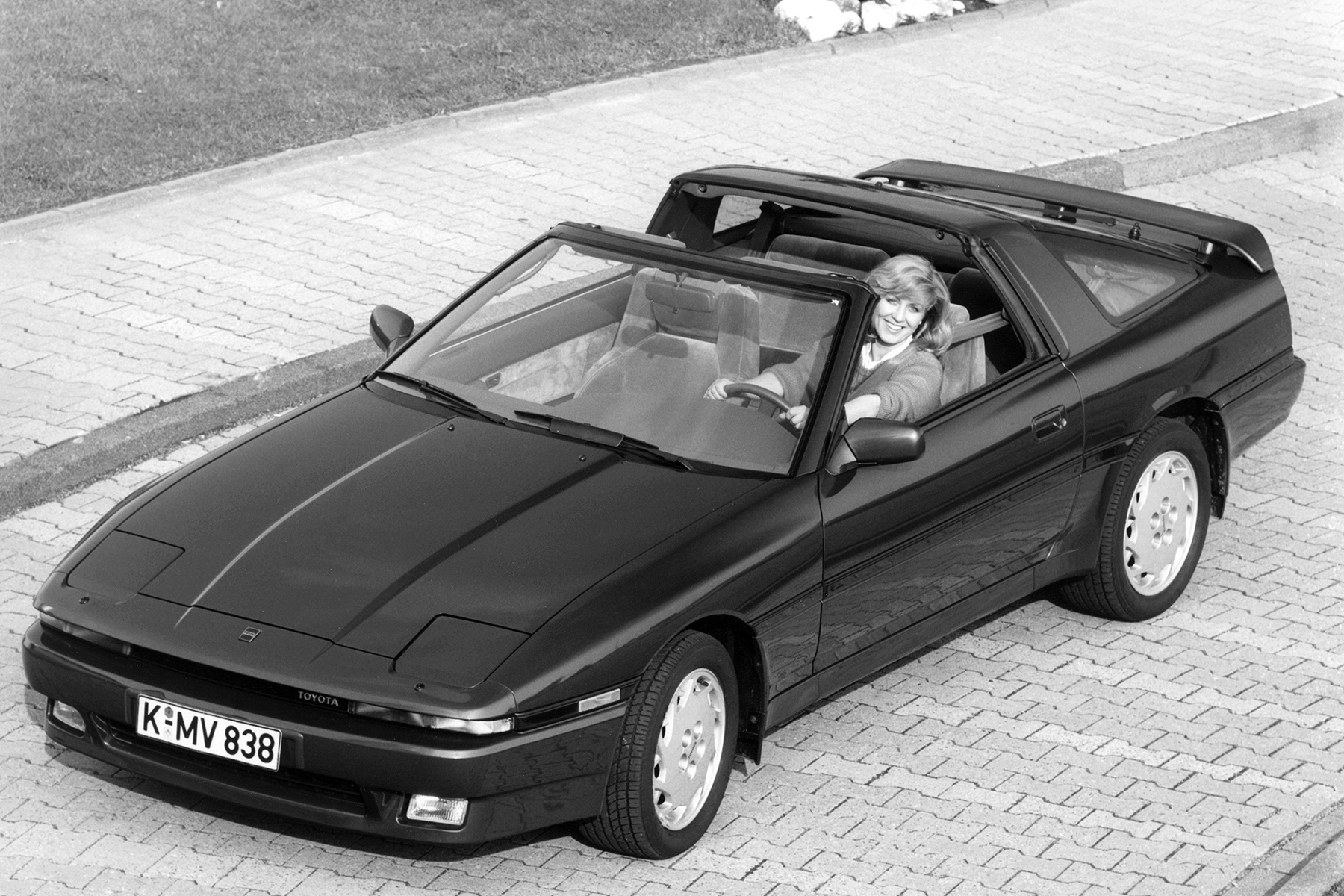 In 1986, the Supra added another string to its bow. A removable targa top pandered to fresh-air fanciers who appealed for a hair-ruffling version of the Toyota coupé when it first appeared. Targa-topped US models gained the enticing ‘Sport Roof’ moniker. 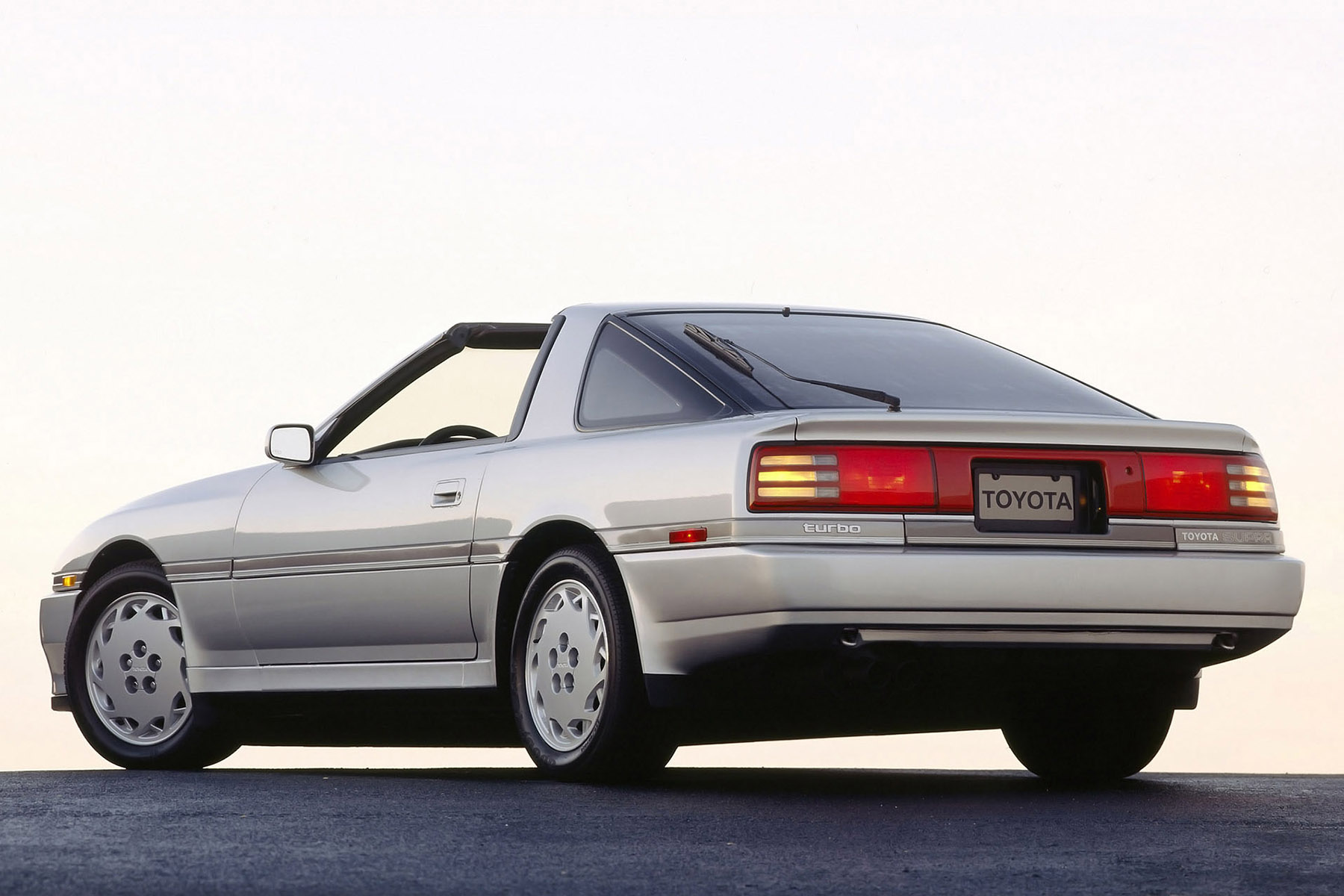 Hot to trot in Group A 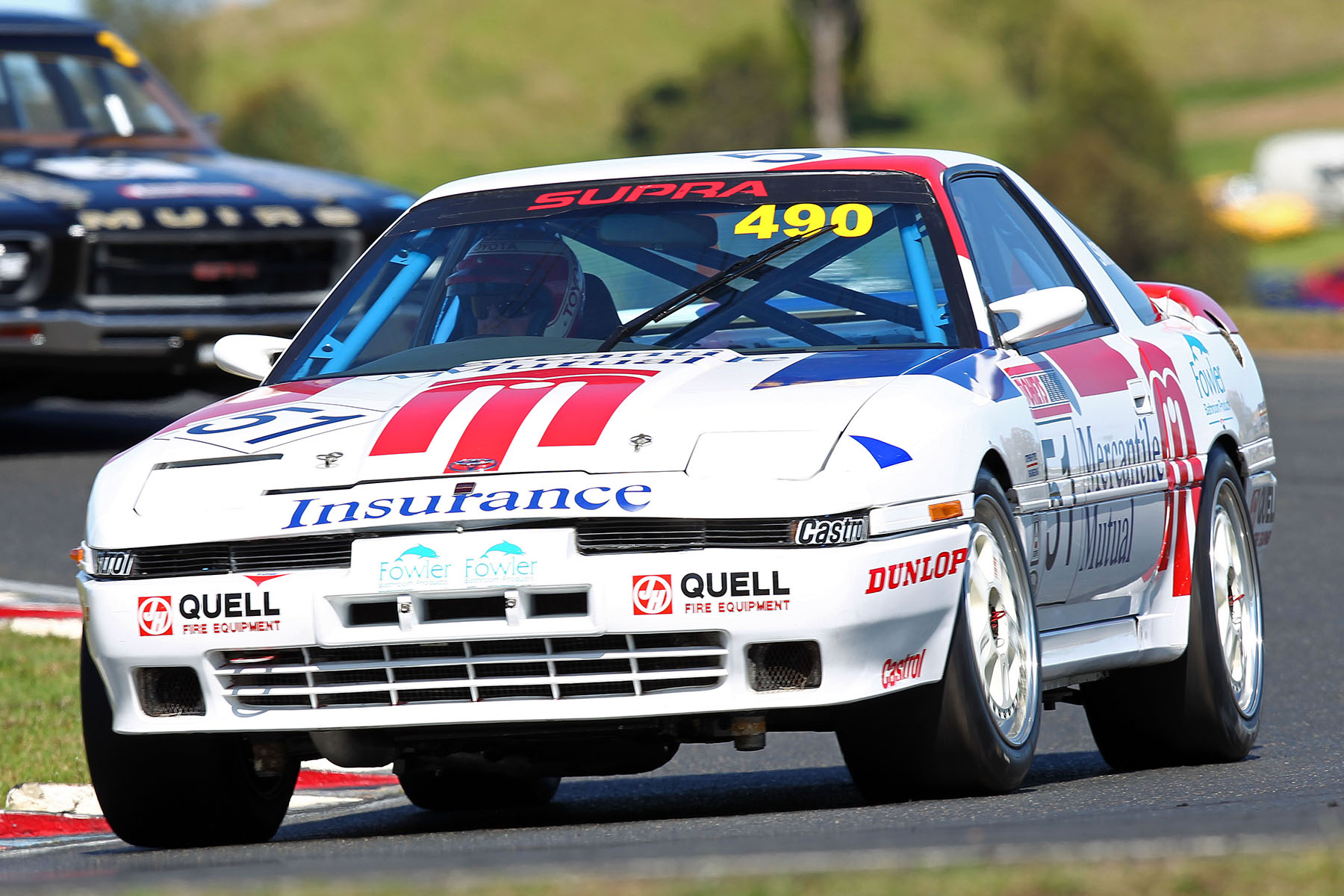 The Supra got even hotter in 1988. The 270hp Turbo A was built to homologate the car for Group A racing in domestic and European touring car series, as well as the World Rally Championship. The limited-edition Supra 3.0 GT Turbo A was the period’s fastest Japanese production car. Zero to 60mph took just 5.0 seconds, and the 3.0 GT Turbo romped to 167mph.

Radiant among its rivals 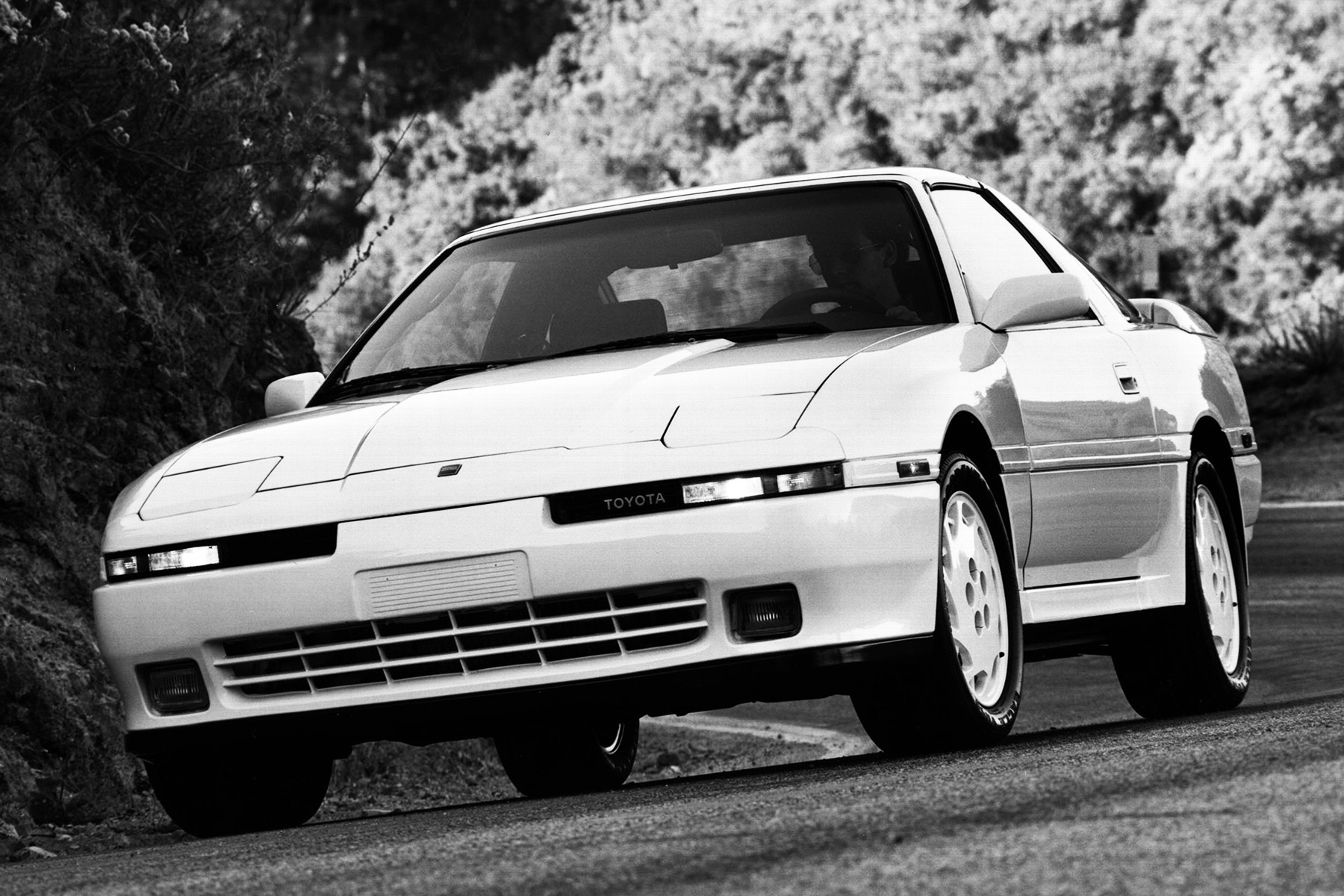 An optional White Pack made the Supra brighter than the rising sun, while in 1991 Toyota dropped its JZ engine – which would also appear in its successor – into the Supra to create a 276hp powerhouse. It needed to move the game on thanks to the arrival of competitors such as the Honda NSX, Mazda RX-7 ‘FD’, and Nissan 300ZX.

A80: the fourth generation 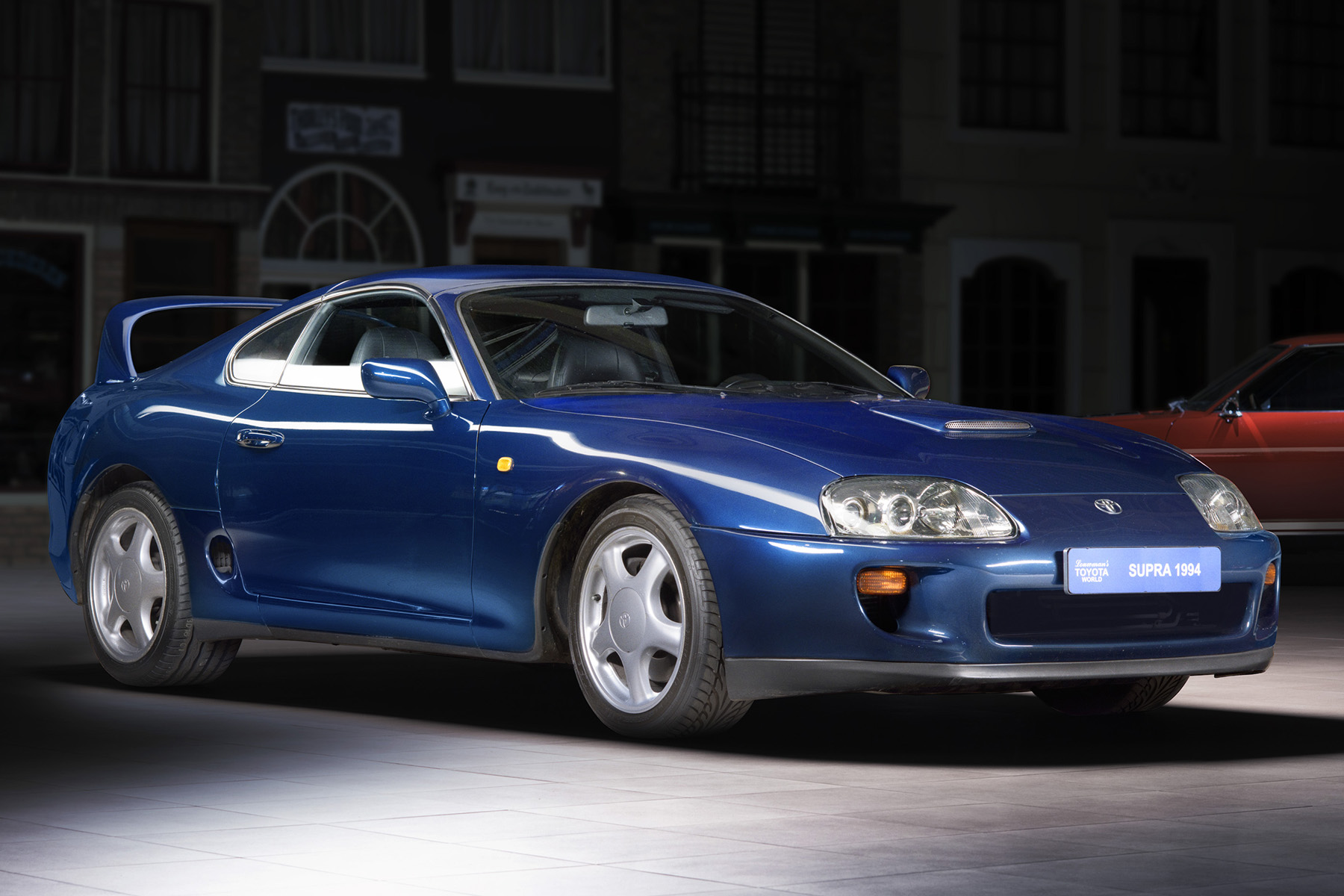 Production of the A70 Supra ended in 1992. The fourth-generation A80 car was unveiled at the 1993 Chicago motor show, and was the culmination of four years of development. A more slippery shape with an optional rear spoiler signalled its performance potential. 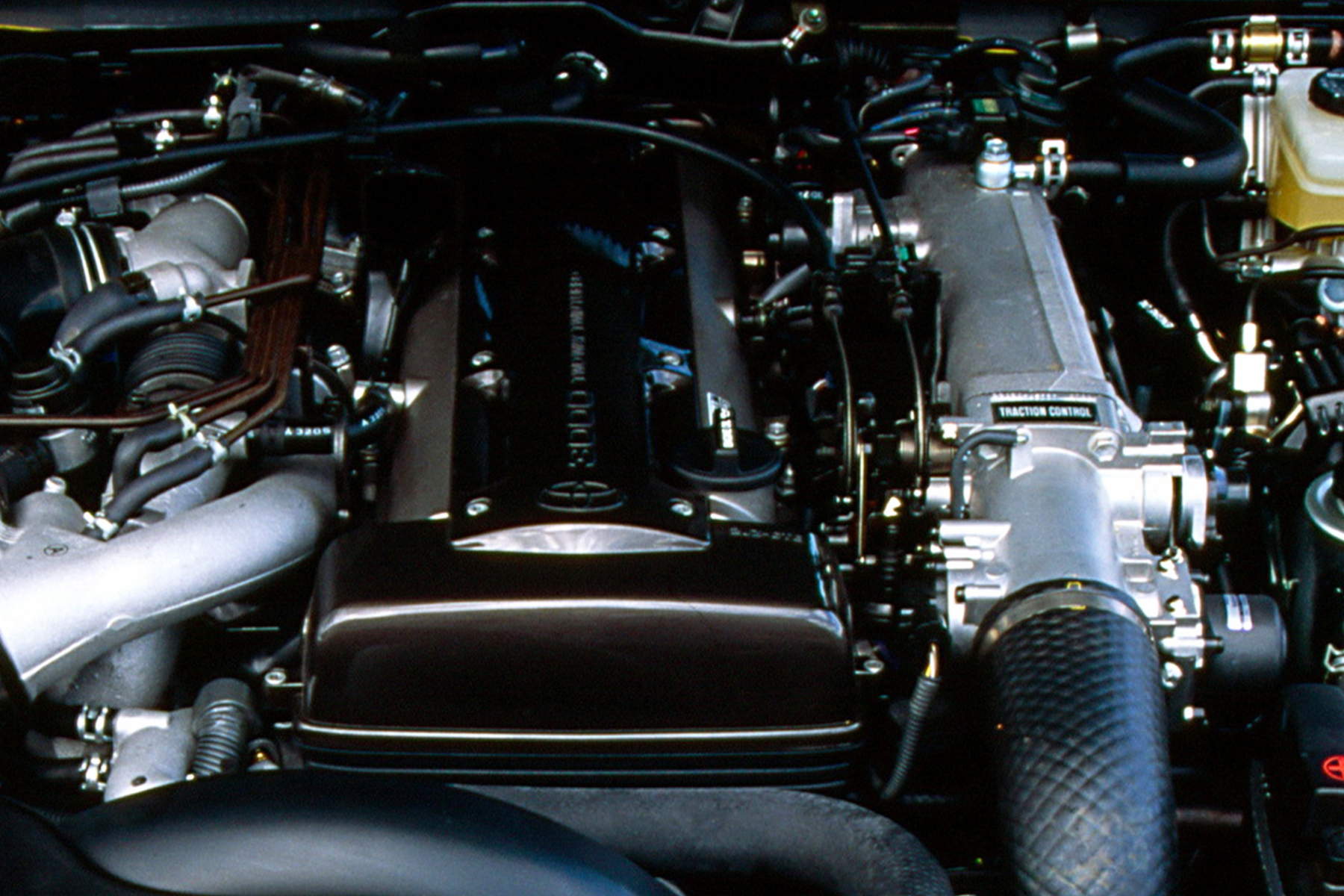 Like the A70, the A80 Supra was leaner in its construction – even the carpet fibres and rear spoiler were hollow to shed weight – but was also more powerful than ever before. A naturally-aspirated or twin-blower 3.0-litre JZ engine gave between 220hp and 326hp. The six-speed Turbo gave true supercar-bothering performance. 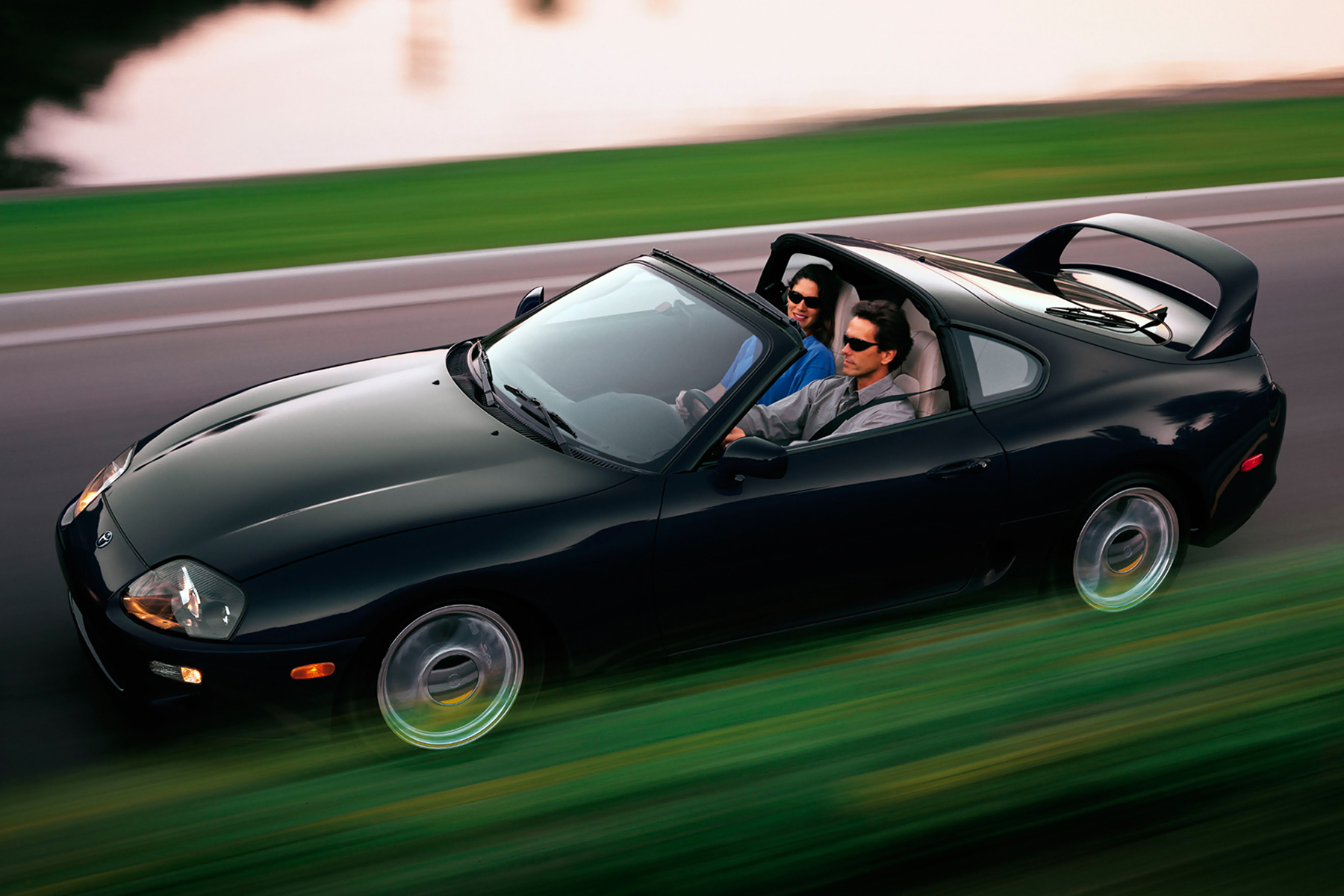 So powerful was the new Supra, even rivals such as the Porsche 911 Carrera had problems keeping up. Brits and Europeans were only offered turbocharged models, and it’s easy to see why they shaded their German rival: the benchmark 0-60mph sprint was dispatched in a scorching 4.6 seconds. 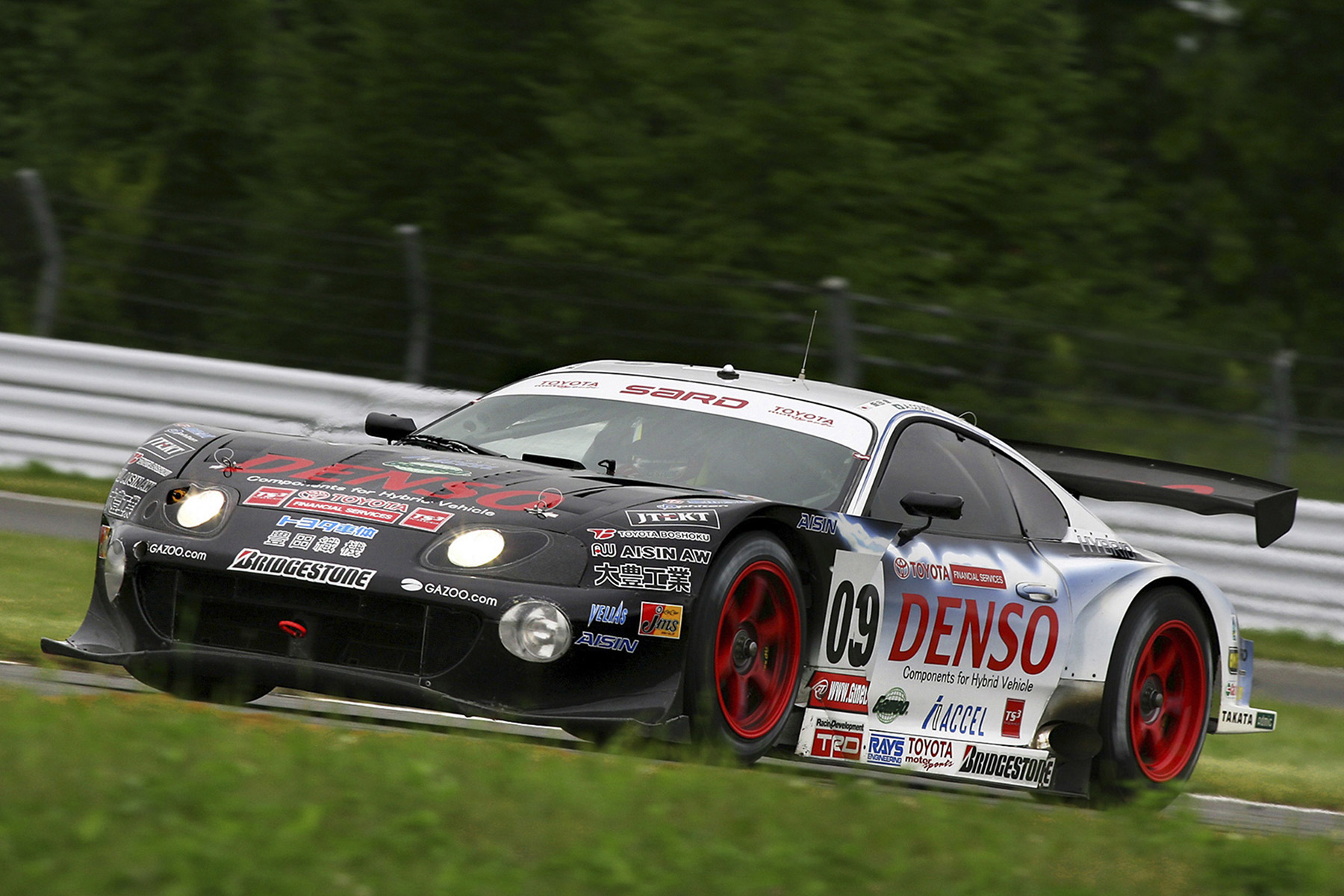 With the Mk4, motorsport was once again on the agenda. The most competitive generation, the A80 did stints at Le Mans, Pikes Peak, mountain races in Switzerland, the US SCCA series, and was a leader in the All-Japan GT Championships from 1995 to 2003. In 2007, a modified Super GT car became the first hybrid to win a motor race: the 500bhp Denso SARD Supra HV-R took victory in the Tokachi 24-Hour endurance event. 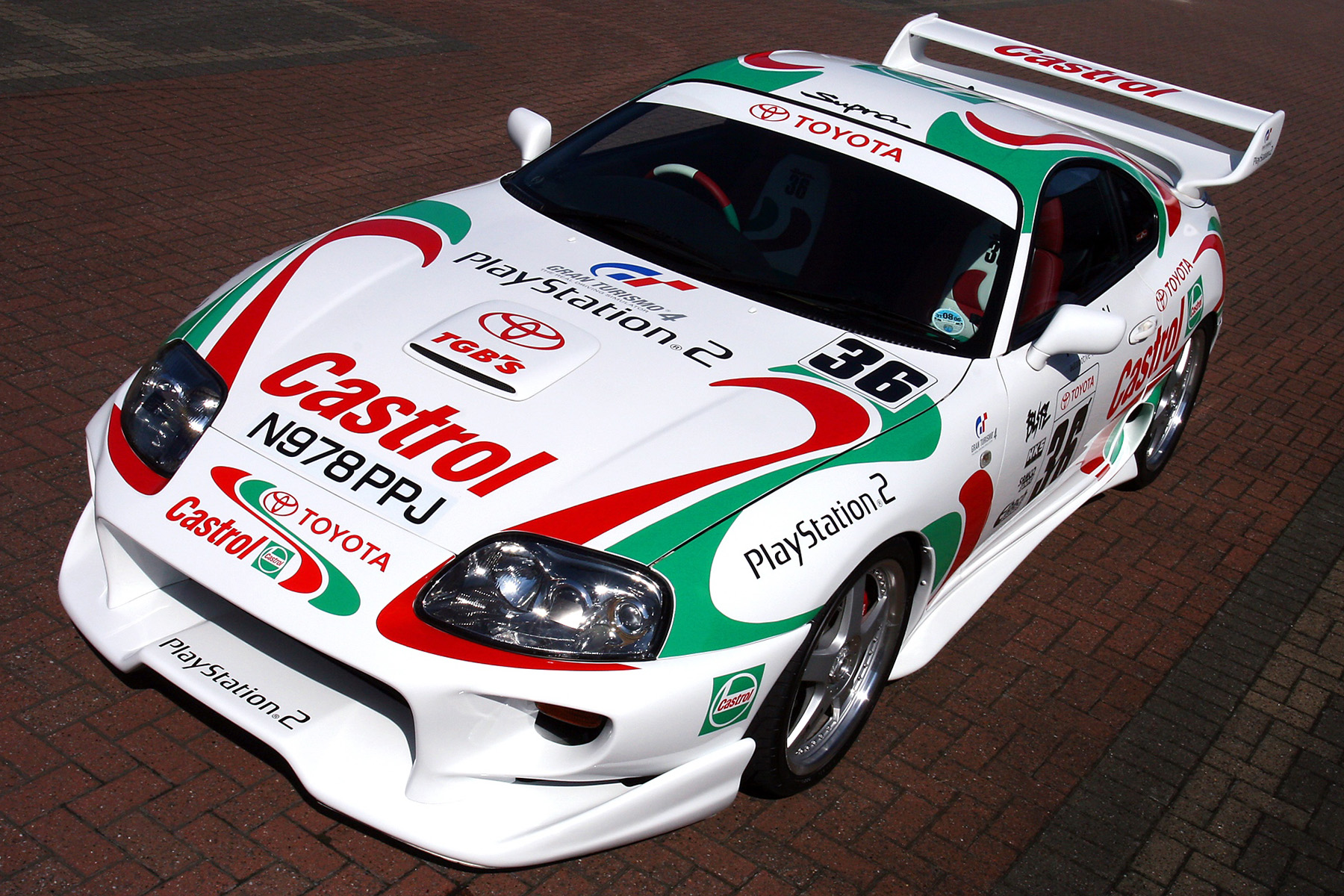 Perhaps the fourth-generation Supra’s biggest claim to fame was to embed itself in the minds of car enthusiasts via its appearance in myriad computer games, including the legendary Gran Turismo and Need for Speed series. The A80 was also a big screen star, featuring in the first The Fast and the Furious film of 2001. The ride of Brian O’Conner, played by Paul Walker, the 700hp be-winged orange Supra inspired a host of copycat cars. 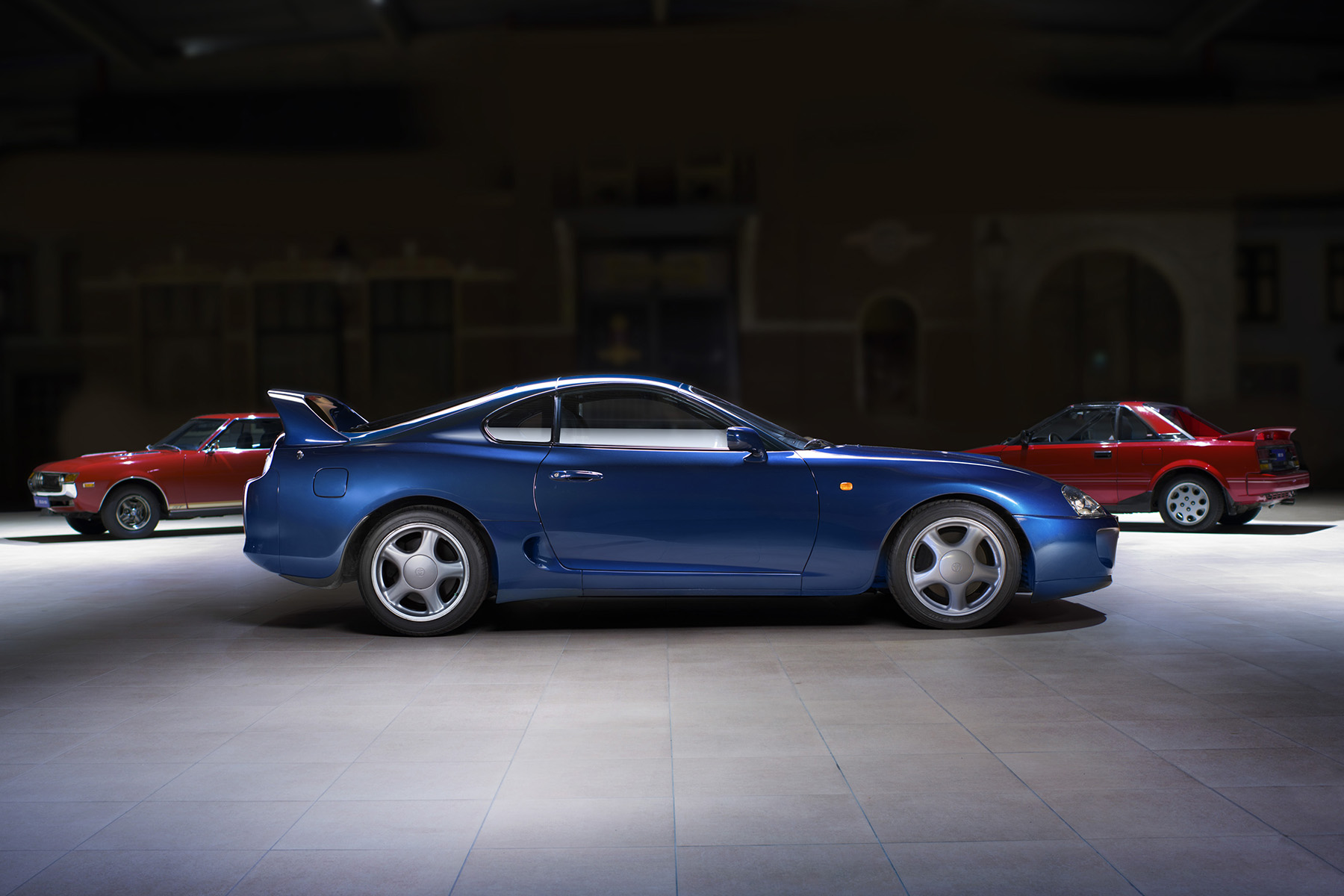 Even though UK sales had stopped in 1996, US drivers could still get their hands on a Supra until 1998. Costly upcoming emission regulations finally killed the Supra in 2002, the Japanese market not able to reverse an ever-decreasing annual sales tally. The Supra joined its Celica and MR2 relatives in Toyota’s sports coupé scrapyard.

From virtual to reality 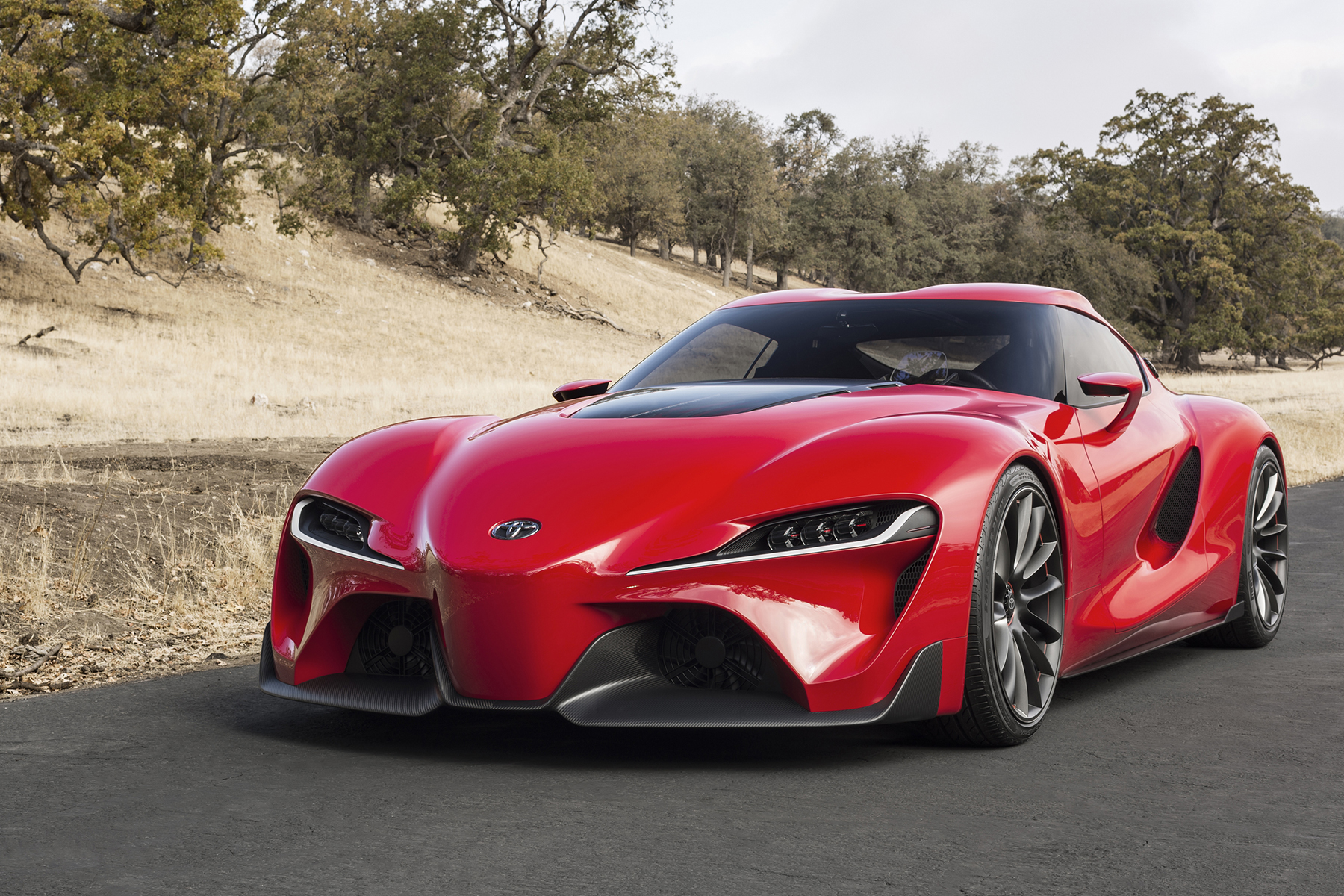 However, in 2014, Toyota hinted at a return of its icon. Designed by Toyota’s Calty Design Research facility in Newport Beach, California, the FT-1 concept debuted at the North American International Auto Show in Detroit. In a case of life simulating art – and with a link to the A80 – the FT-1 also appeared in Gran Turismo 6 and the virtual car was used to pitch the concept to Toyota president Akio Toyoda. 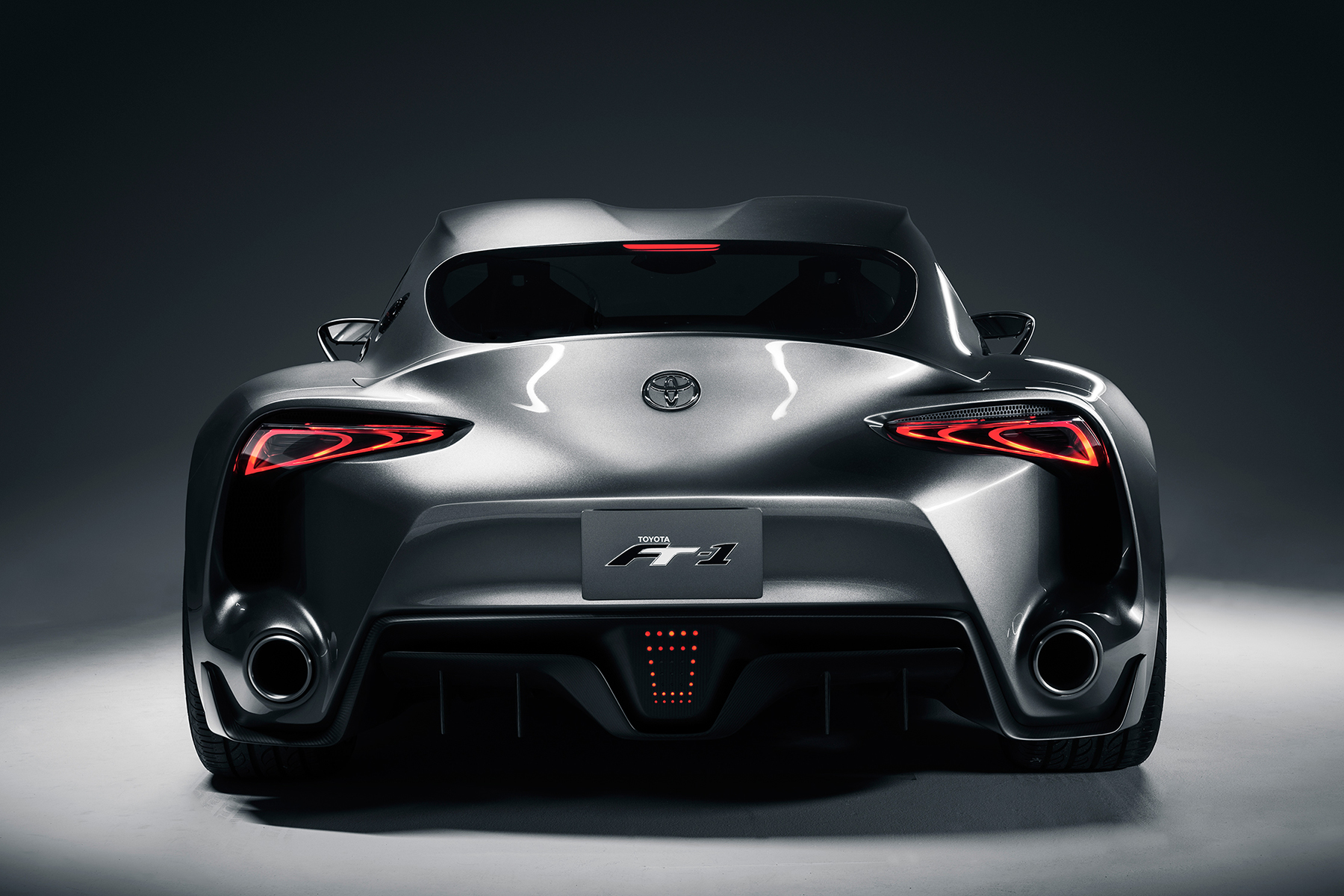 The FT-1 (Future Toyota 1) was said to herald the ‘most capable, most exciting generation of vehicles the company has ever produced’. Billed as the ‘ultimate world-class sports car’ and ‘a true enthusiast track car in the iconic lineage of 2000 GT and Supra’, the FT-1 whipped up a frenzy among Supra fans. 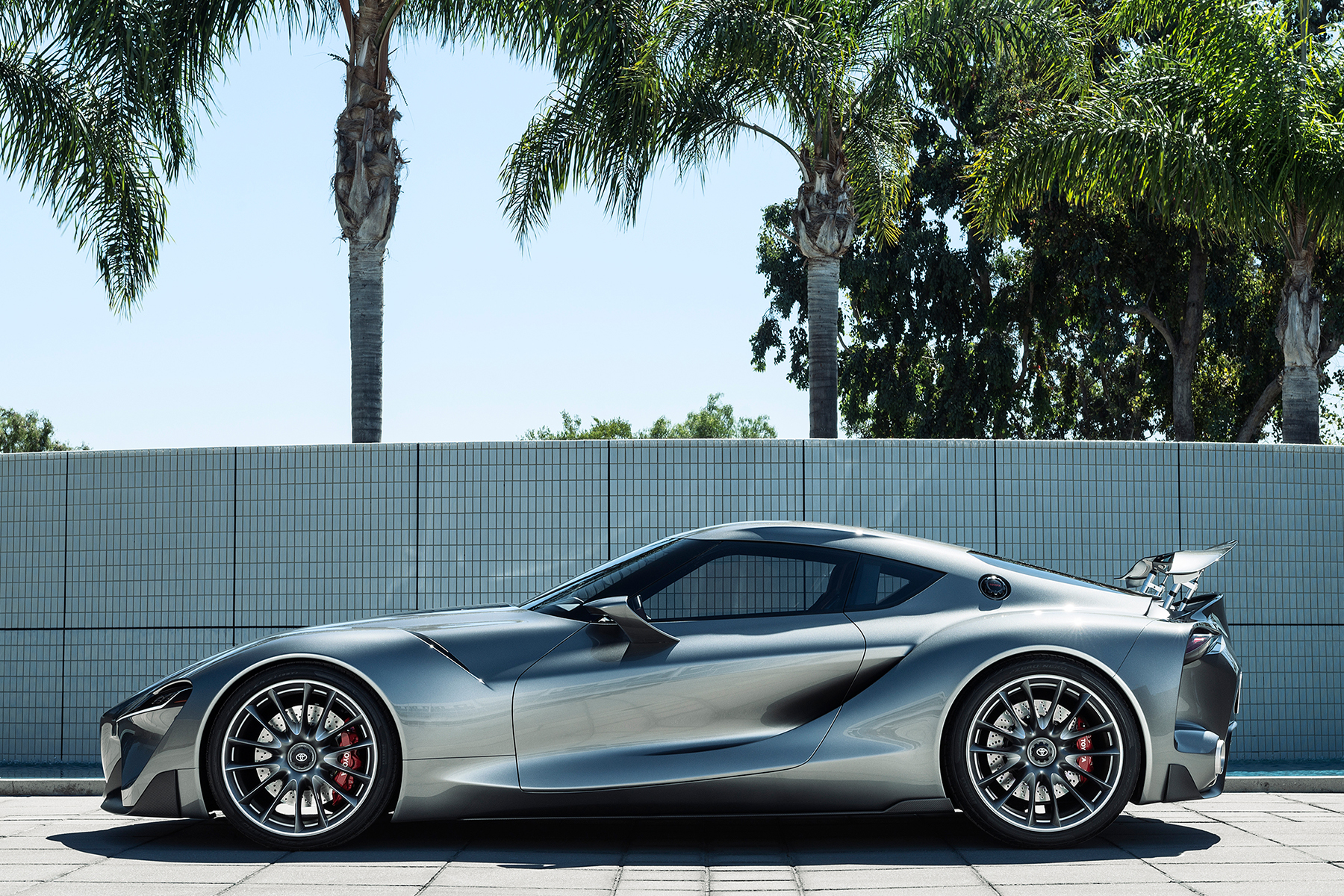 With glorious-sounding development cars having been snapped at that German circuit, the Supra is due for a return. Leaked stats suggest six-cylinder power remains, while the 335hp coupé has been jointly developed with BMW’s new Z4. The car is expected to be badged ‘Gazoo’, referencing Toyota’s Gazoo Racing arm, but whether the Supra name will stay is up for debate. Some sources state that the GT-1 badge may be used, pointing to Toyota’s 1990s GT-One Le Mans racer. 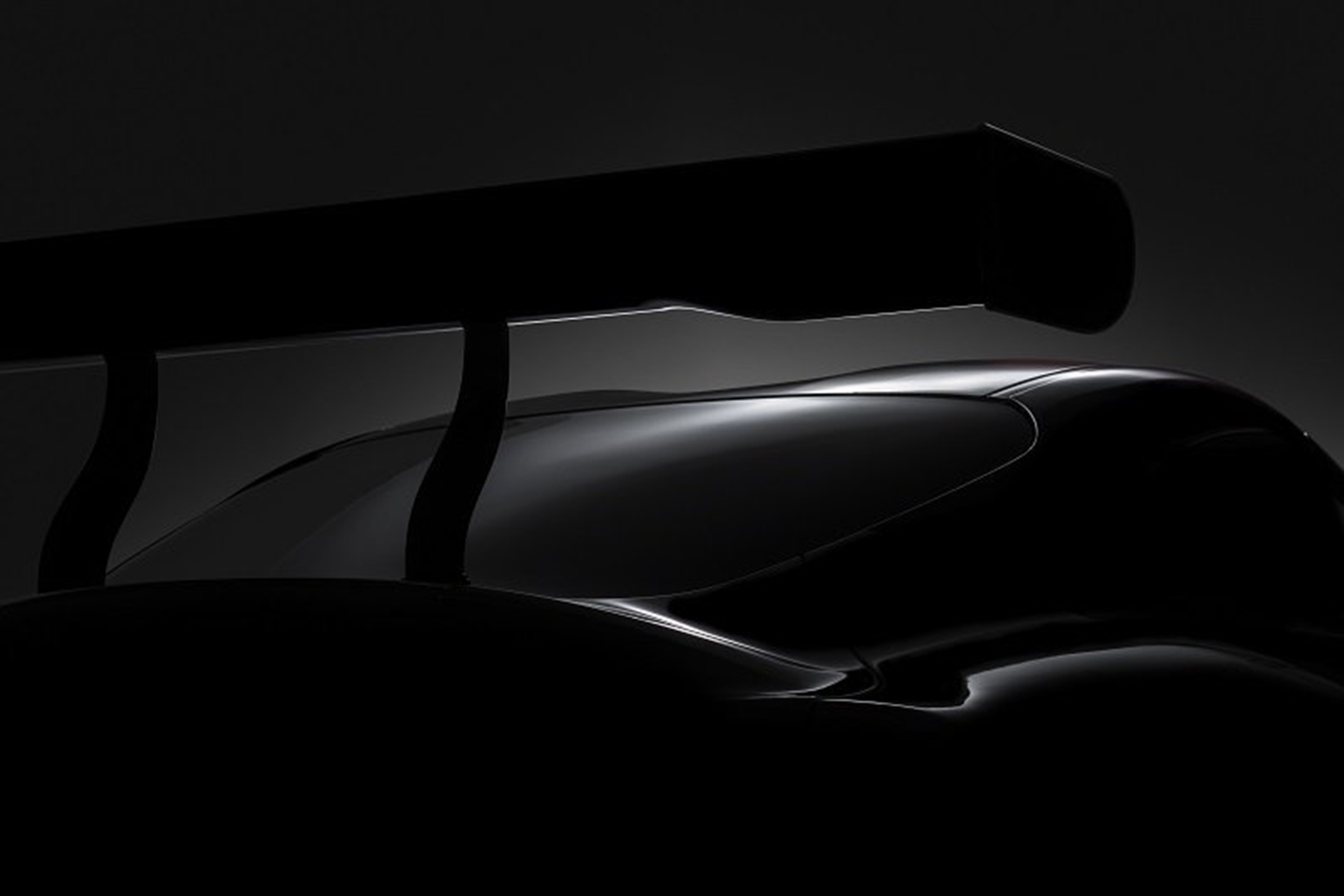 The fifth-generation of Toyota’s range-topping sports coupé will be shown as a thinly-veiled ‘modern racing concept’ at the 2018 Geneva Motor Show. Toyota has released a teaser image stating it will ‘bring back its most iconic sports car.’ While it doesn’t explicitly point to a new Supra, the concept is tipped to preview the forthcoming 2019 – possibly hybrid-powered – production car.

The Jaguar S-Type was a mission-critical part of Ford's plan to popularise the brand by taking on the mighty BMW 5 Series
Read more
Previous articleMk2 Seat Leon Cupra R review: driving a bargain hot hatch
Next articleThe history of the Ford Focus: in pictures

The Volkswagen K70 is celebrating its 50th anniversary in 2020. Destined to wear an NSU badge, it was a turning point in the firm's history.
Read more

From the Traction Avant to the new electric Ami One, we look back at some of Citroen’s greatest hits (plus a couple of misses).
Read more

Mach in time: The story of the Ford Mustang Mach 1

Ford has confirmed that the Mach 1 performance Mustang is coming to the UK. We dive into the history of this fabled badge.
Read more

We count down the 25 coolest cars ever, as determined by a public poll. Those chosen include the AC Cobra, Porsche 911 and Nissan Skyline GT-R.
Read more
Features

‘The Porsche of the East’: Skoda celebrates 50 years of sports cars

We remember the pretty, rear-engined Skoda 110 R coupe, which made its debut 50 years ago – and look at its legacy.
Read more
Features

As Seat launches its new Cupra sub-brand, we look back at the 2010 Leon Cupra R
Read more