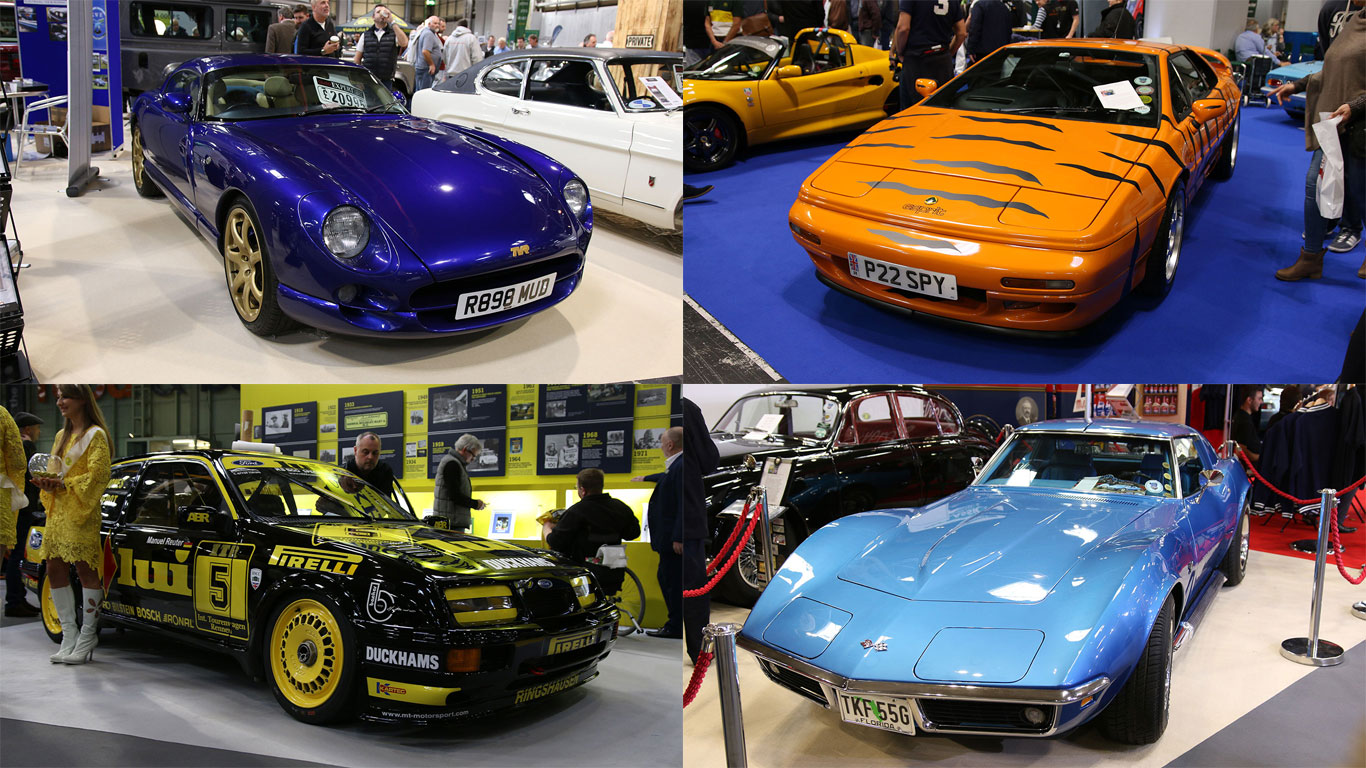 It’s day one of the NEC Classic Motor Show and we’re out in force as we celebrate the launch of our new retro-themed website. Join us as we take you through our favourite cars from the opening day of the show. 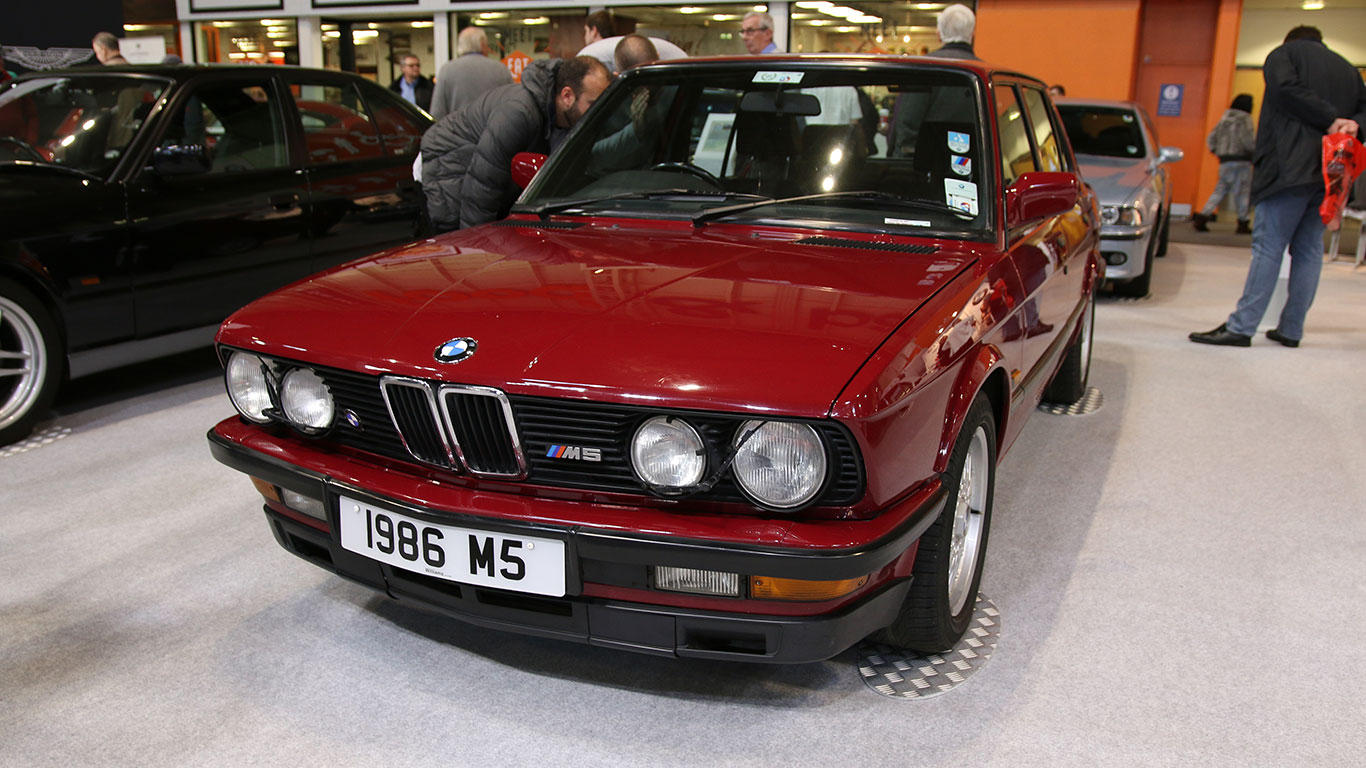 We begin with one of our stars of the show: an E28 generation BMW M5. There at the birth of the super-saloon, the original M5 laid the foundations for all future BMW M products, offering an almost unrivalled blend of performance, practicality and discreet styling. Come Sunday evening, this is the car we’d like to drive home from Birmingham. Via the backroads, of course. 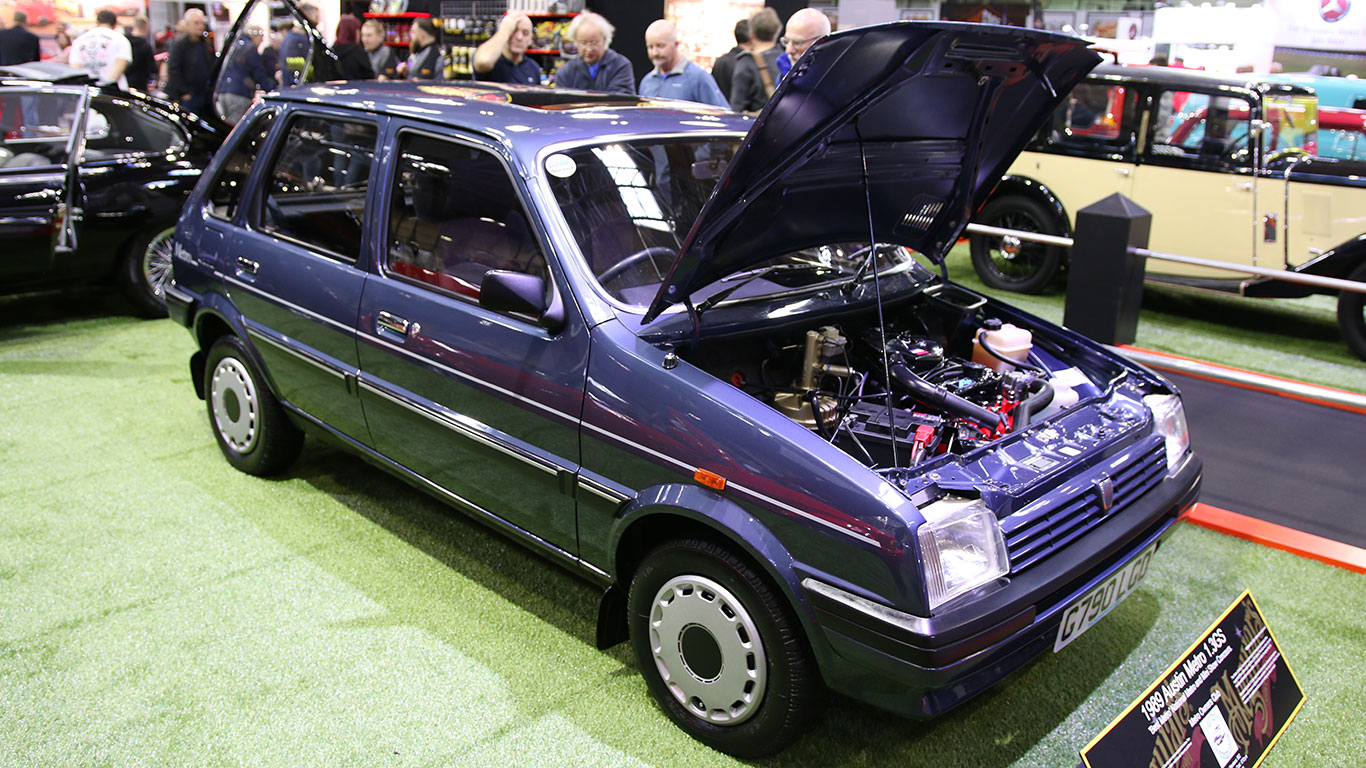 That said, we suspect Retro MR’s editor, Andrew Brady, might have something to say about that. His love of the Metro is probably the one thing he has in common with the late Princess Diana, who would fall royally head over in heels in love with this 1989 Austin Metro 1.3 GS. We’re saying nothing about the bonnet being up. 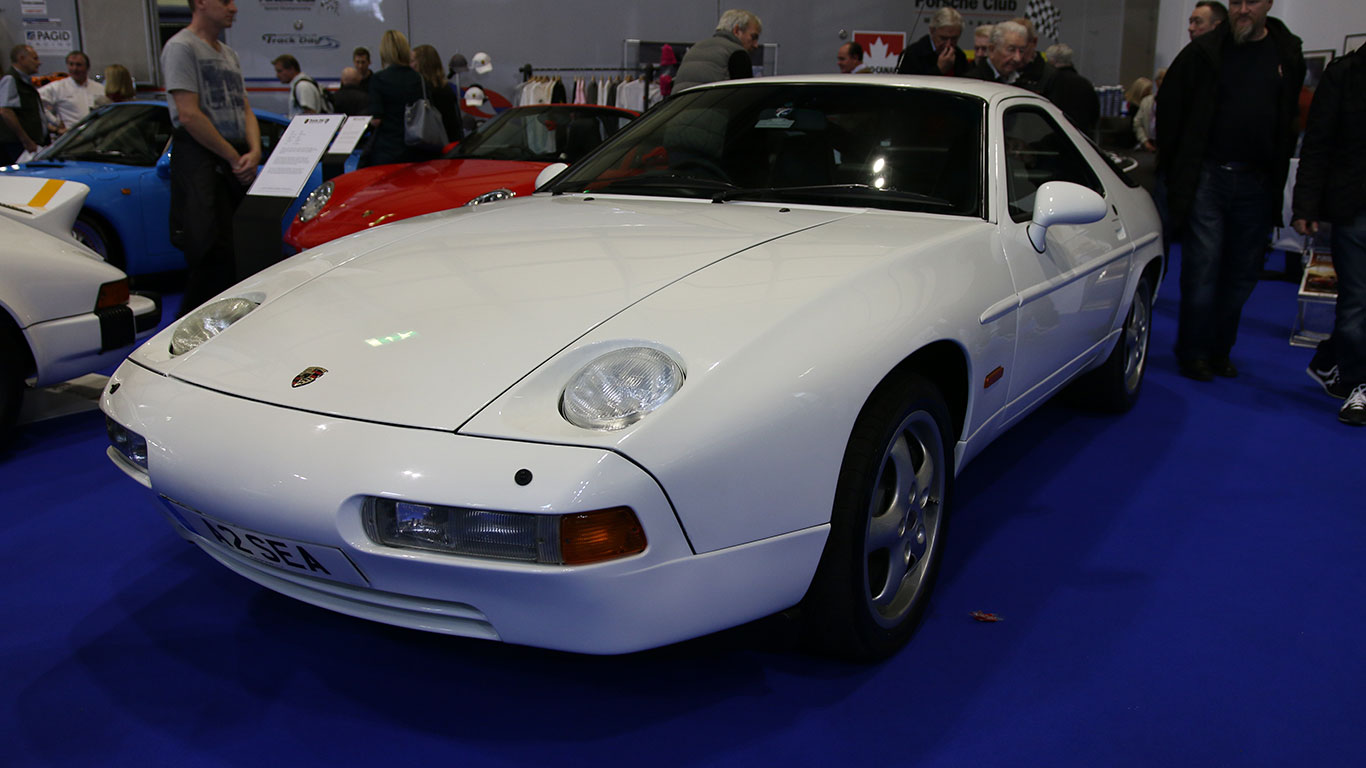 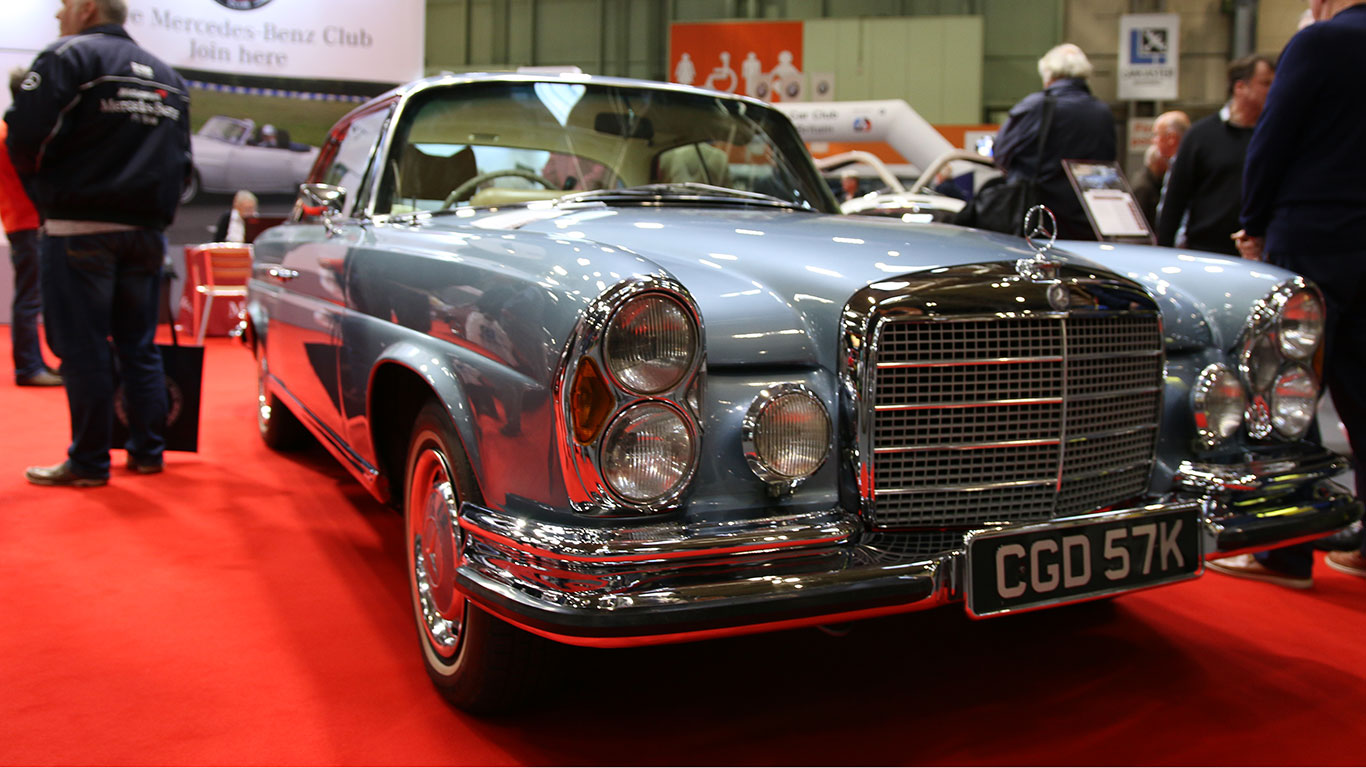 Remember when Mercedes built classy and elegant cars? If not, this 280 SE is a useful reminder… 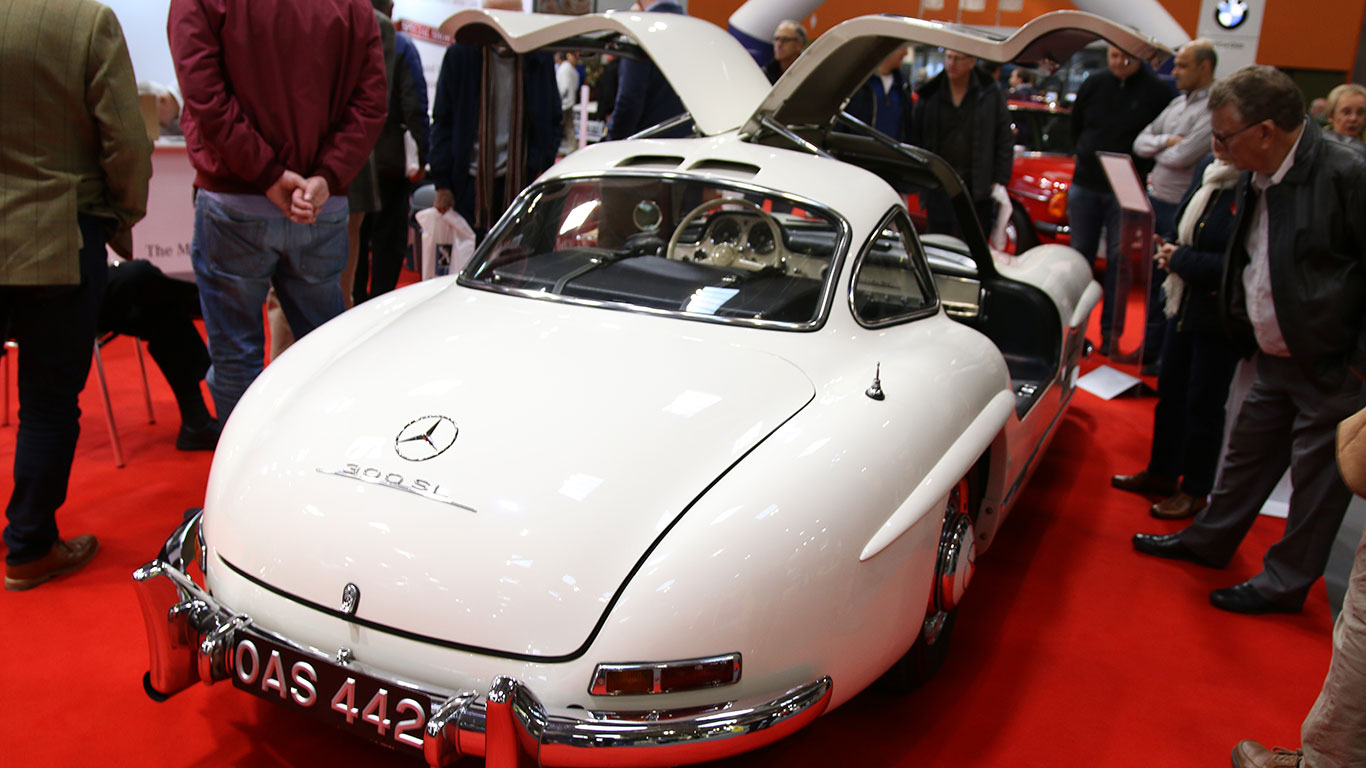 The same can be said about this 1956 Mercedes 300 SL, which remains a rare sight in the UK, as the vast majority of the 1,400 SL gullwings built were sold in the US. There’s one available in the forthcoming RM Sotheby’s New York Icons sale, which is expected to fetch around £1m. This example won’t be driving home from the NEC, as it is without an MOT. 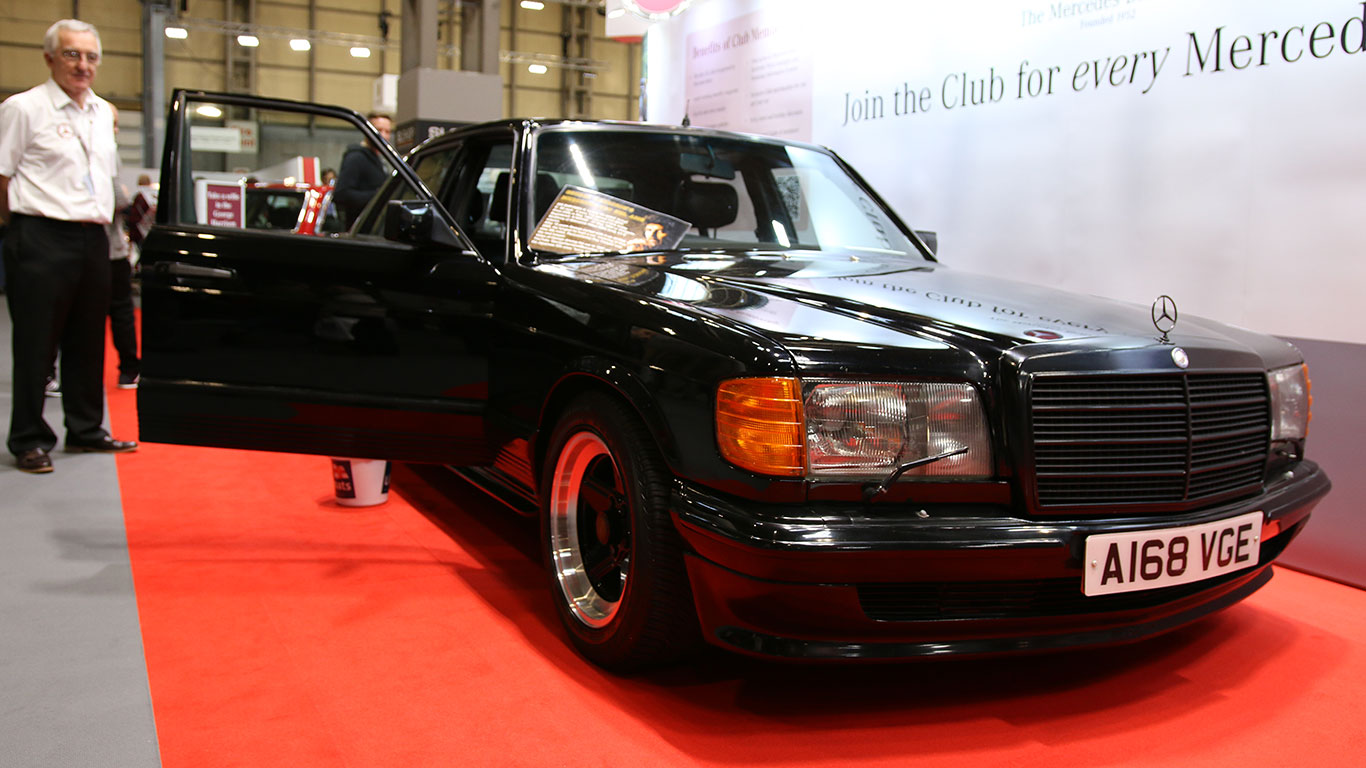 My Sweet Lord, this is a tremendous Mercedes 500 SEL AMG. The owner must be living on Cloud Nine to be the proud custodian of a car formerly owned by George Harrison. 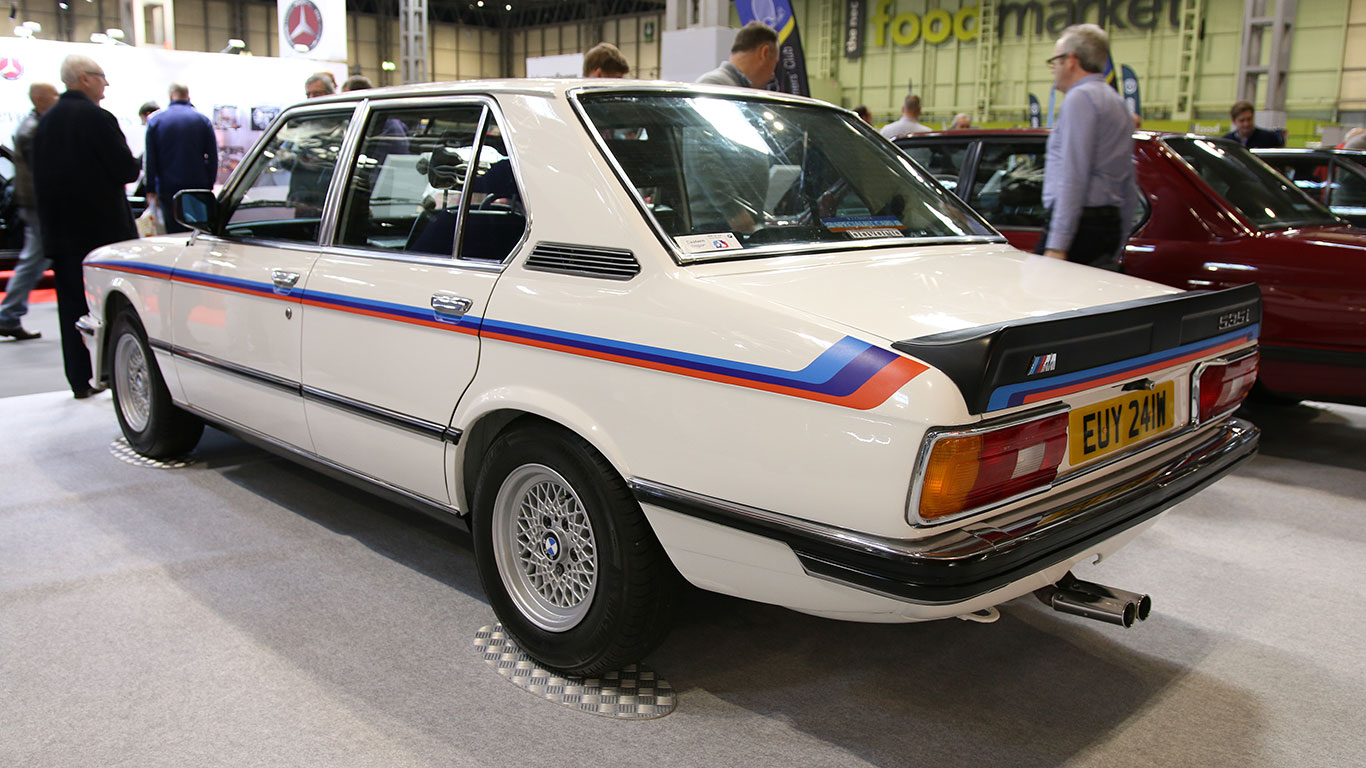 The M535i is the only official BMW Motorsport-developed version of the E12, although it wasn’t a true M5. That said, power is sourced from the 3.5-litre straight-six found in the 735i and 635CSi, with BMW Motorsport working on the chassis and cosmetics. Who doesn’t love tri-colour BMW Motorsport graphics and a rubber rear spoiler? 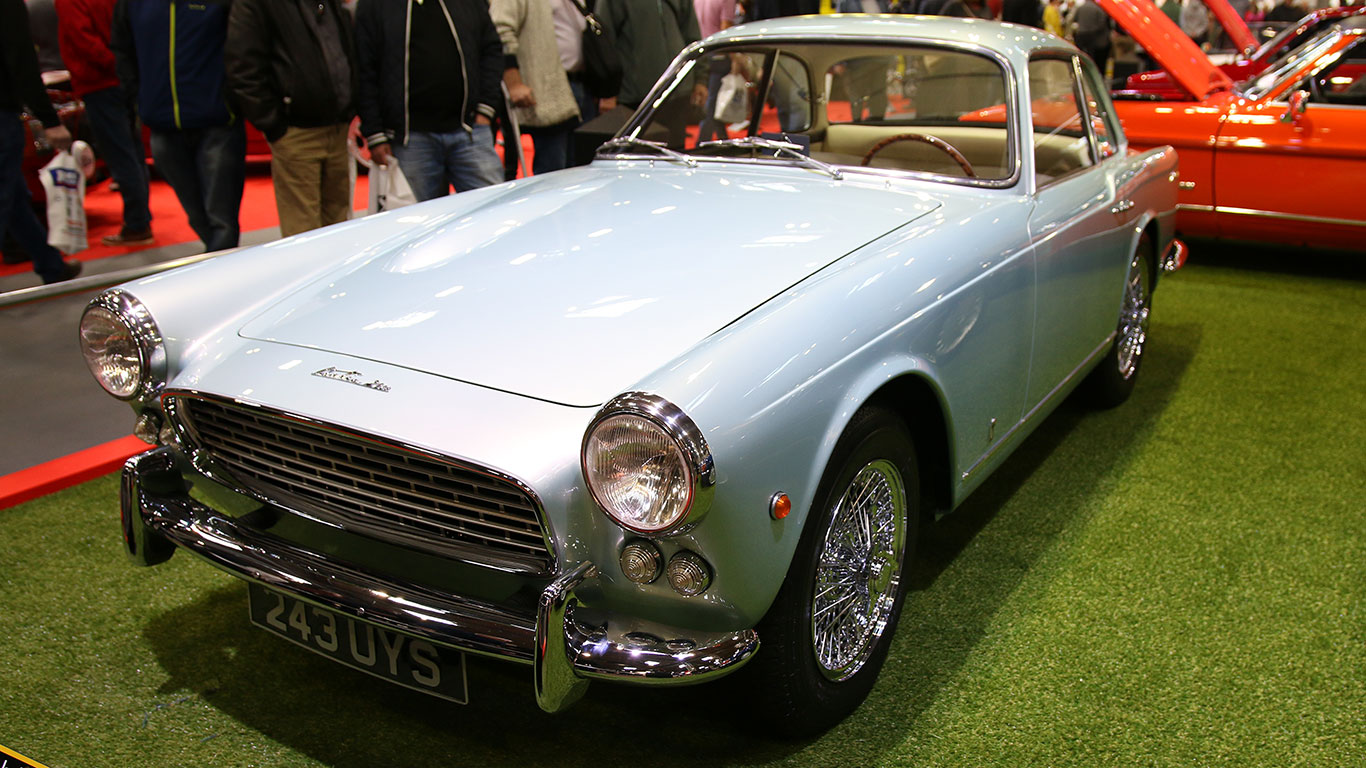 The oft-forgotten Triumph Italia 2000 was designed by Giovanni Michelotti, built by Vignale under contract to Ruffino S.p.A, and based on the chassis of a TR3A. “Italian bodywork at its best, British tradition in sports car engineering at its finest,” read the sales literature, with Ruffino positioning the Italia as a grand tourer. Around 300 were built, but very few survive. 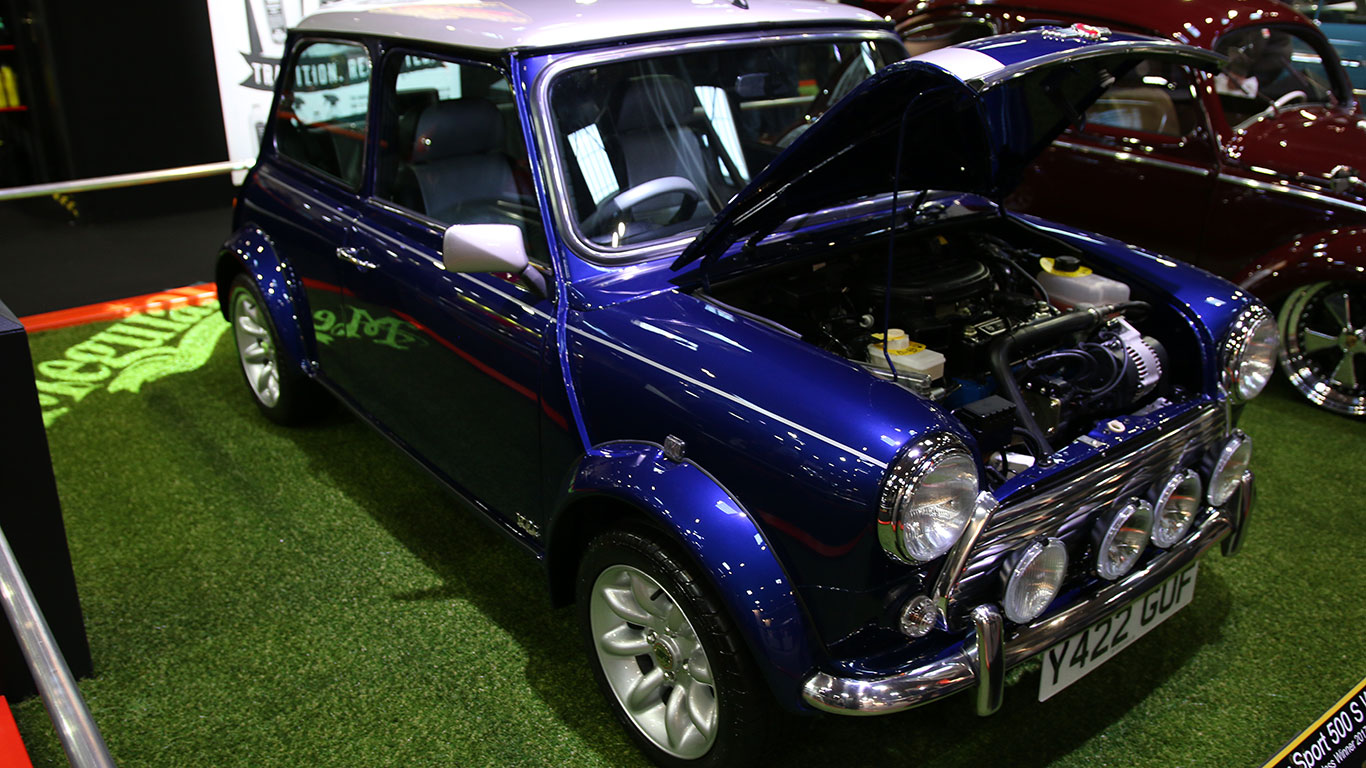 “This Mini is one of the last 500 built to the original Sir Alec Issigonis design,” reads the plaque on the dashboard which, in hindsight, looks like a thinly-veiled dig at the BMW MINI. The Cooper Sport 500 was the final chapter in the MINI’s 41-year history. 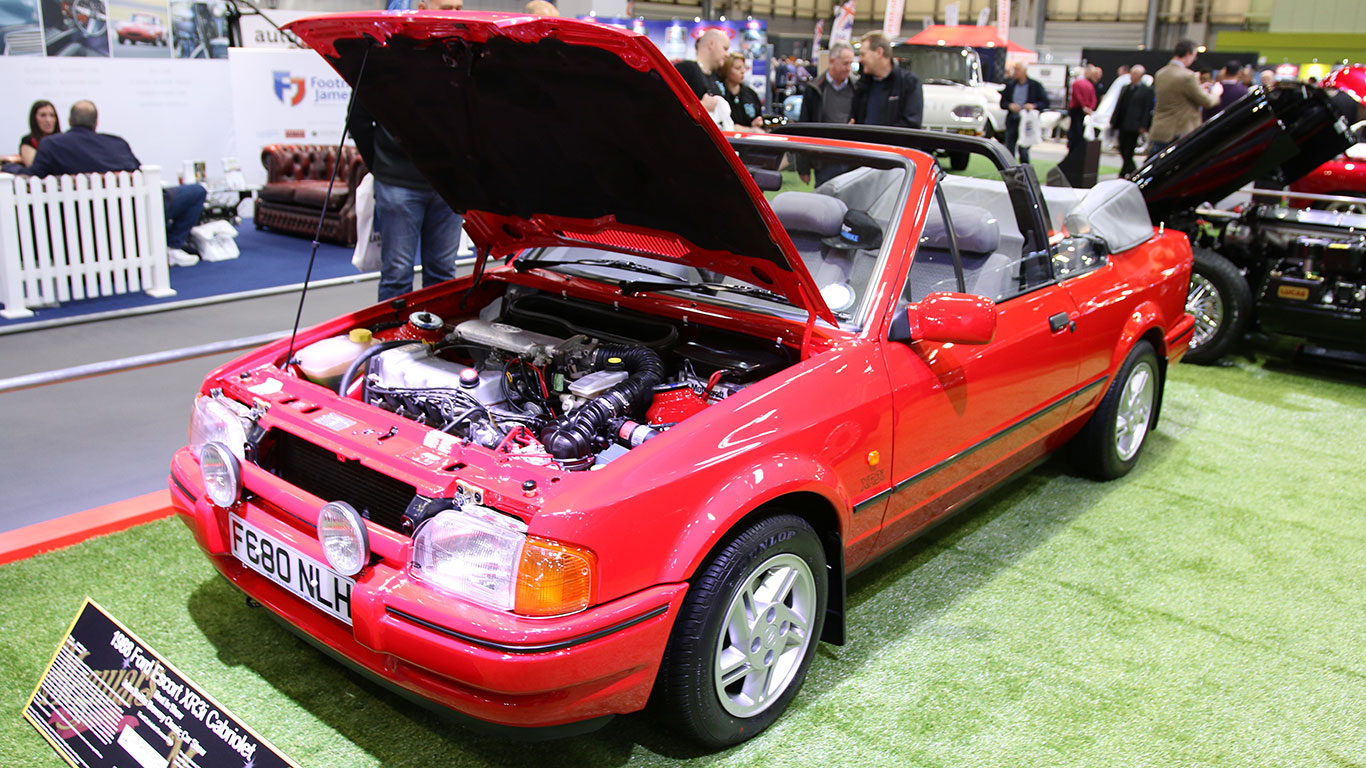 Few things in life are guaranteed – witness the American election, Brexit and last week’s Strictly Come Dancing – but investing in a Ford of the 80s and 90s is probably a safe bet. By the end of the weekend, we expect this Ford Escort XR3i Cabriolet to be worth the equivalent of a parking space in St Ives. 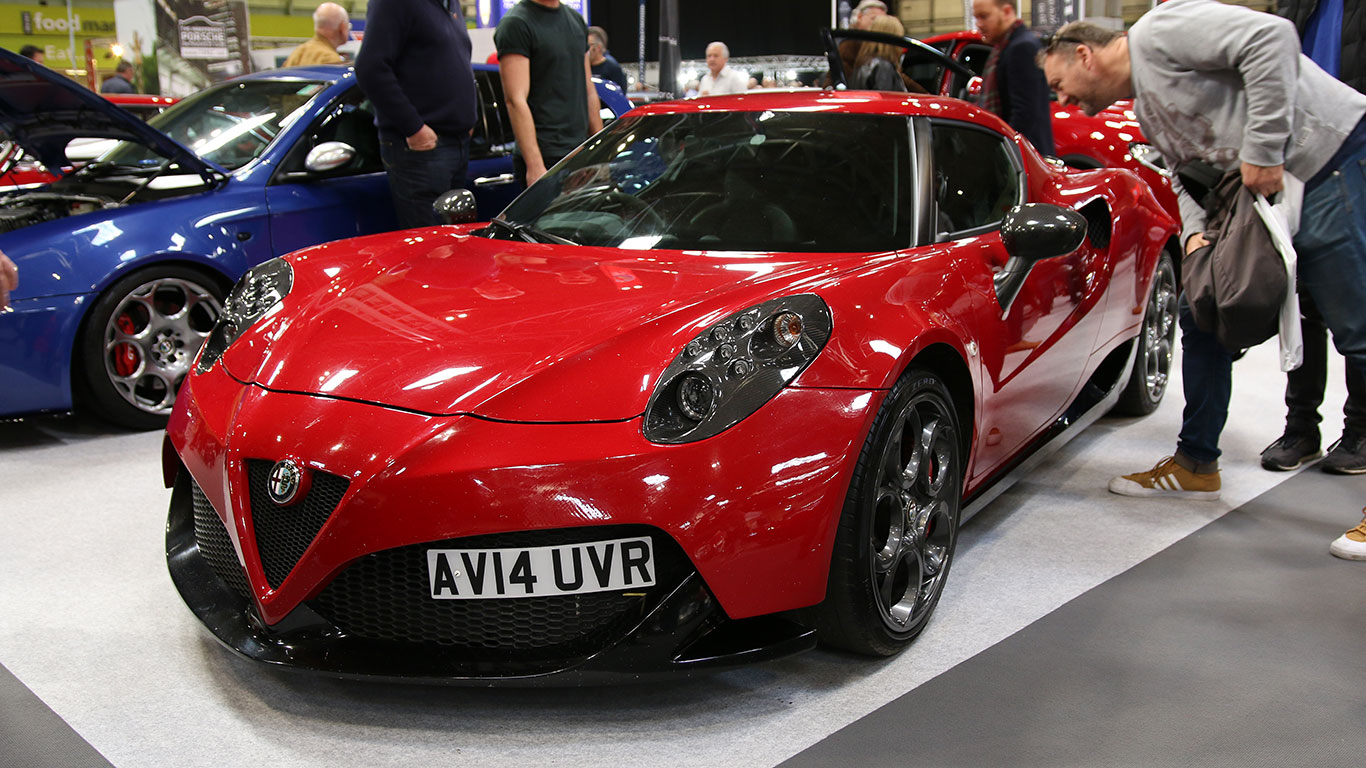 A modern classic or simply modern? You decide. 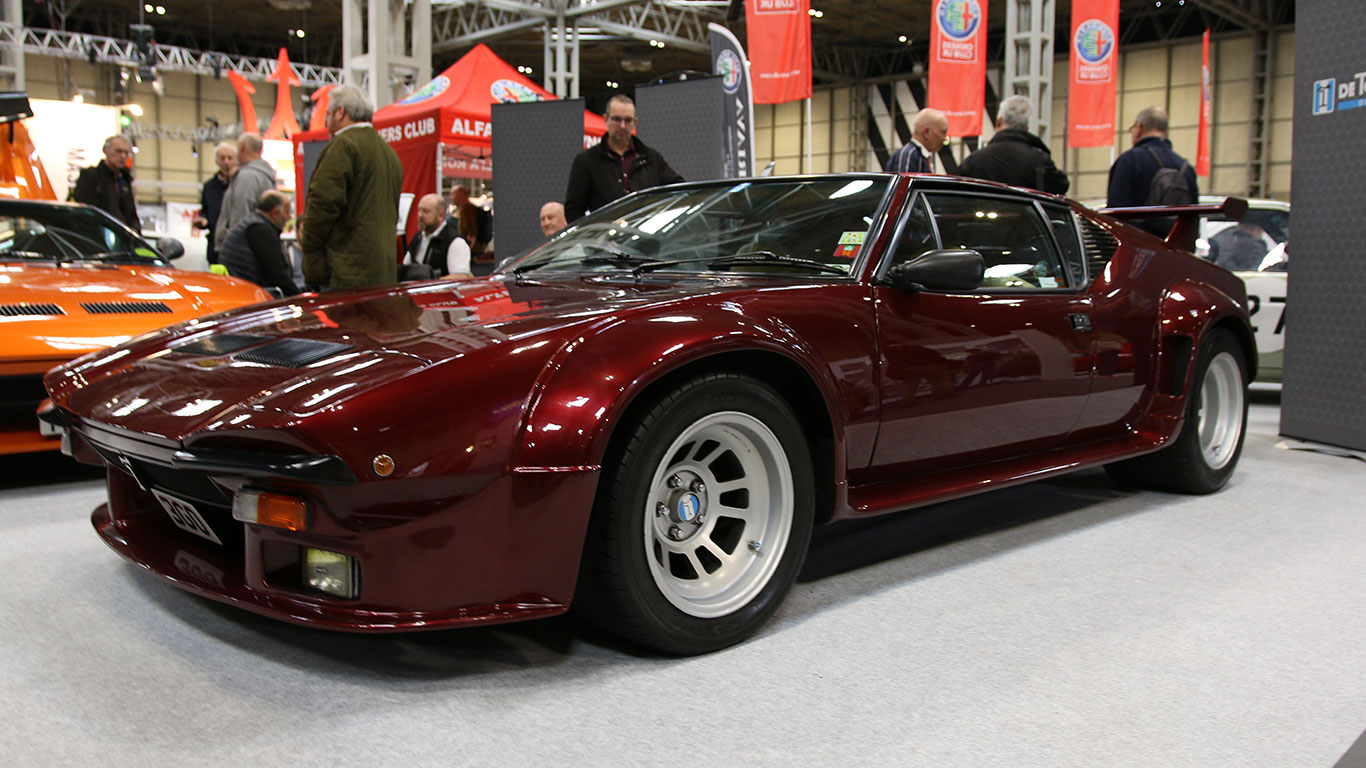 Cool number plate, even cooler car. The DeTomaso Pantera was a product of the 1970s, but, much like the Lamborghini Countach, it evolved into something more in-tune with the 1980s, as demonstrated by this GT5. 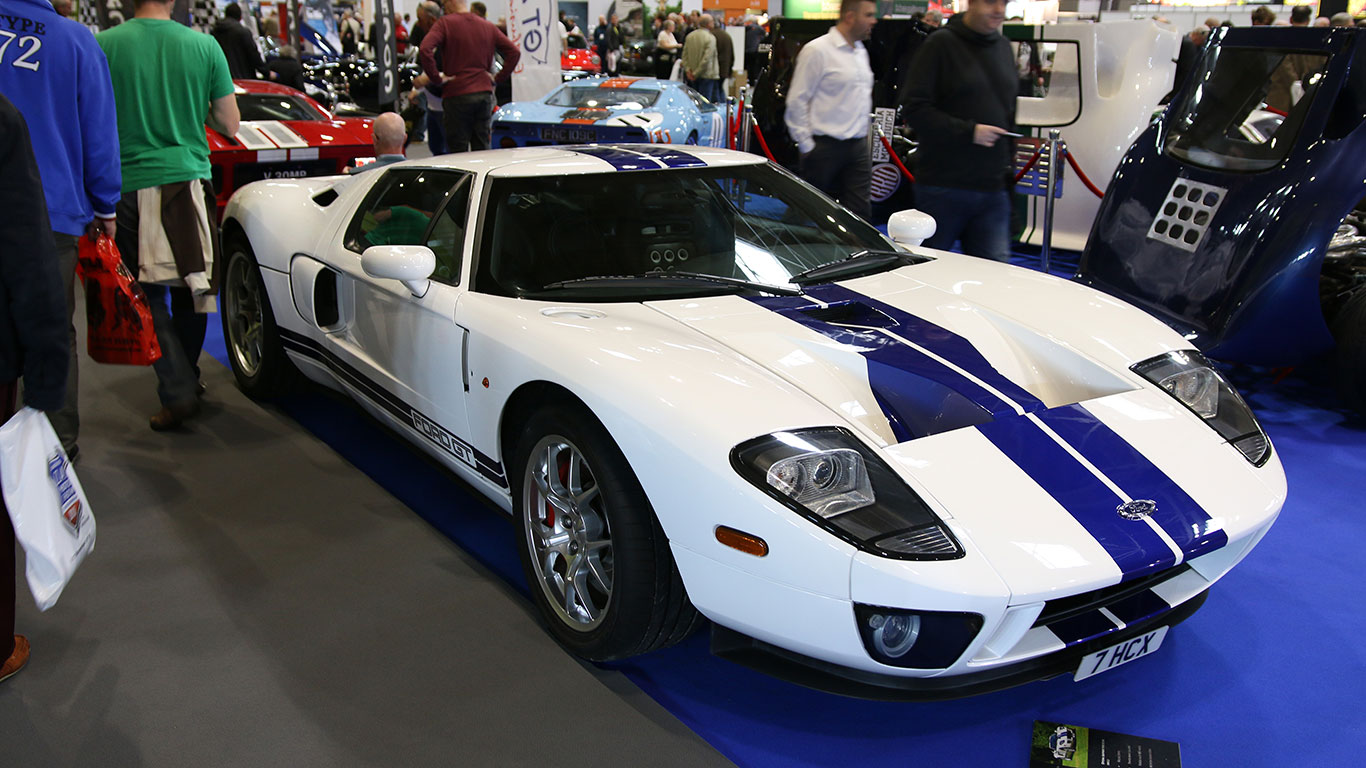 Not to be confused with the new, invitation-only Ford GT, this is the first generation model, built as a homage to the GT40 of the 1960s. It’s powered by a 5.4-litre supercharged V8 engine and is capable of reaching a top speed of 205mph. 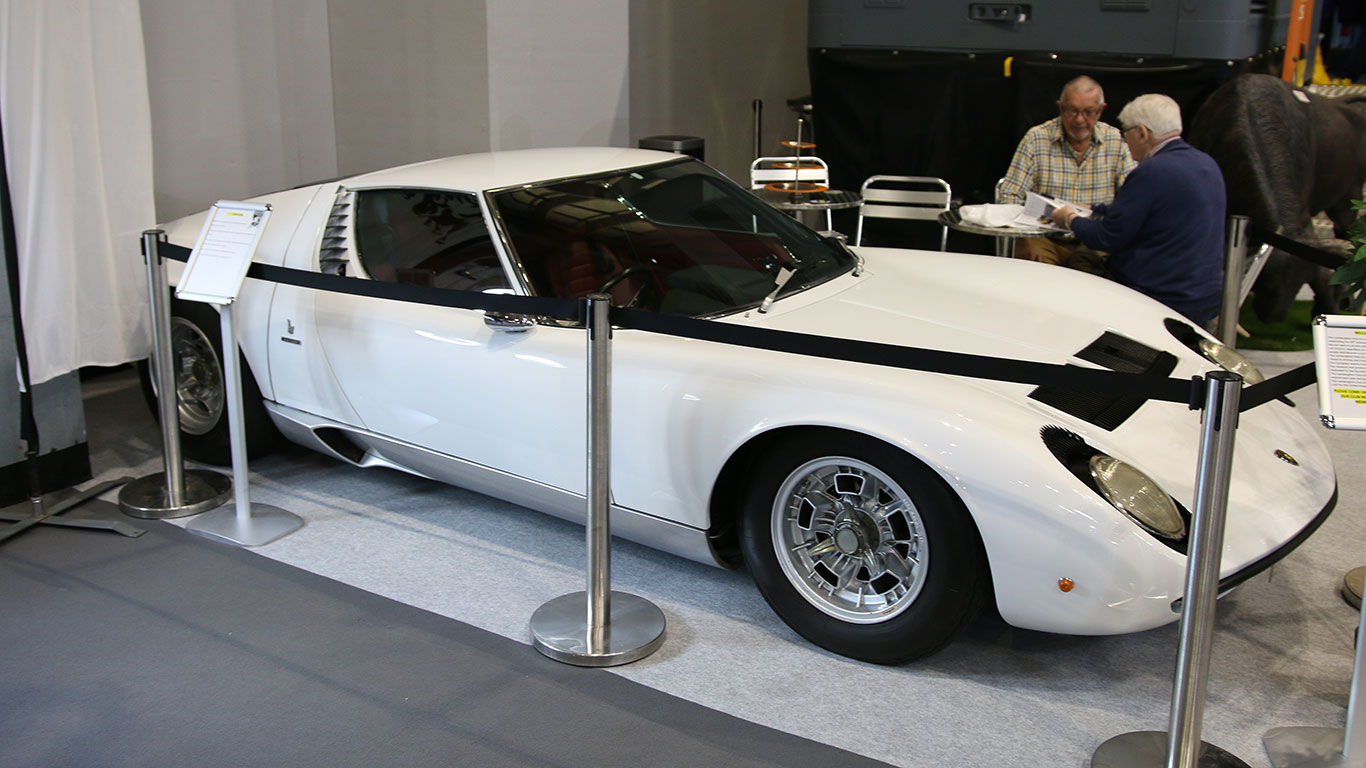 The most beautiful car at the NEC Classic Motor Show? That’s one to discuss on the journey home, but we can all agree that the Miura is a rare example of a car with an ability to rock the headlight eyelashes look. 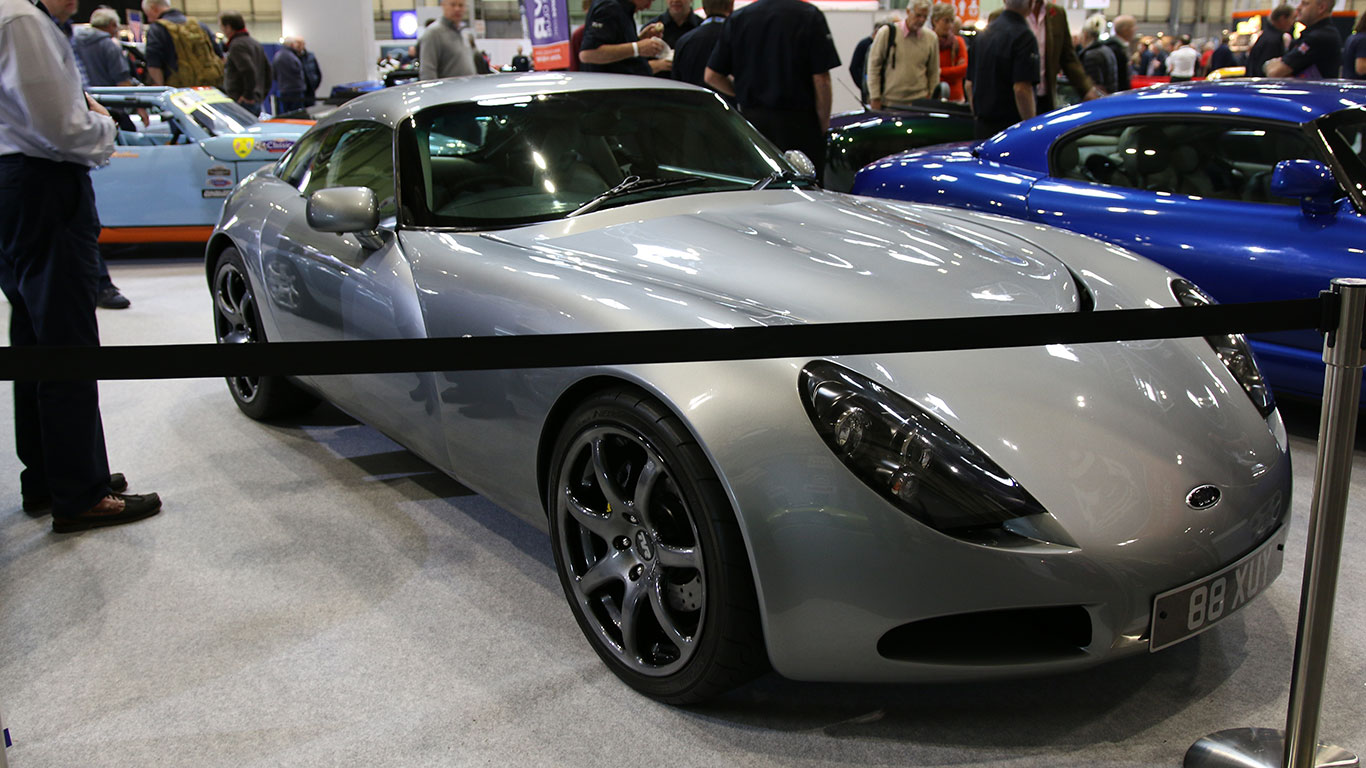 The new TVR Griffith is on display at the NEC, but we prefer our TreVoRs to be a little more retro. This T350 is powered by a 3.6-litre straight-six engine and is capable of reaching a top speed of 190mph, hitting 100mph in around 10 seconds. 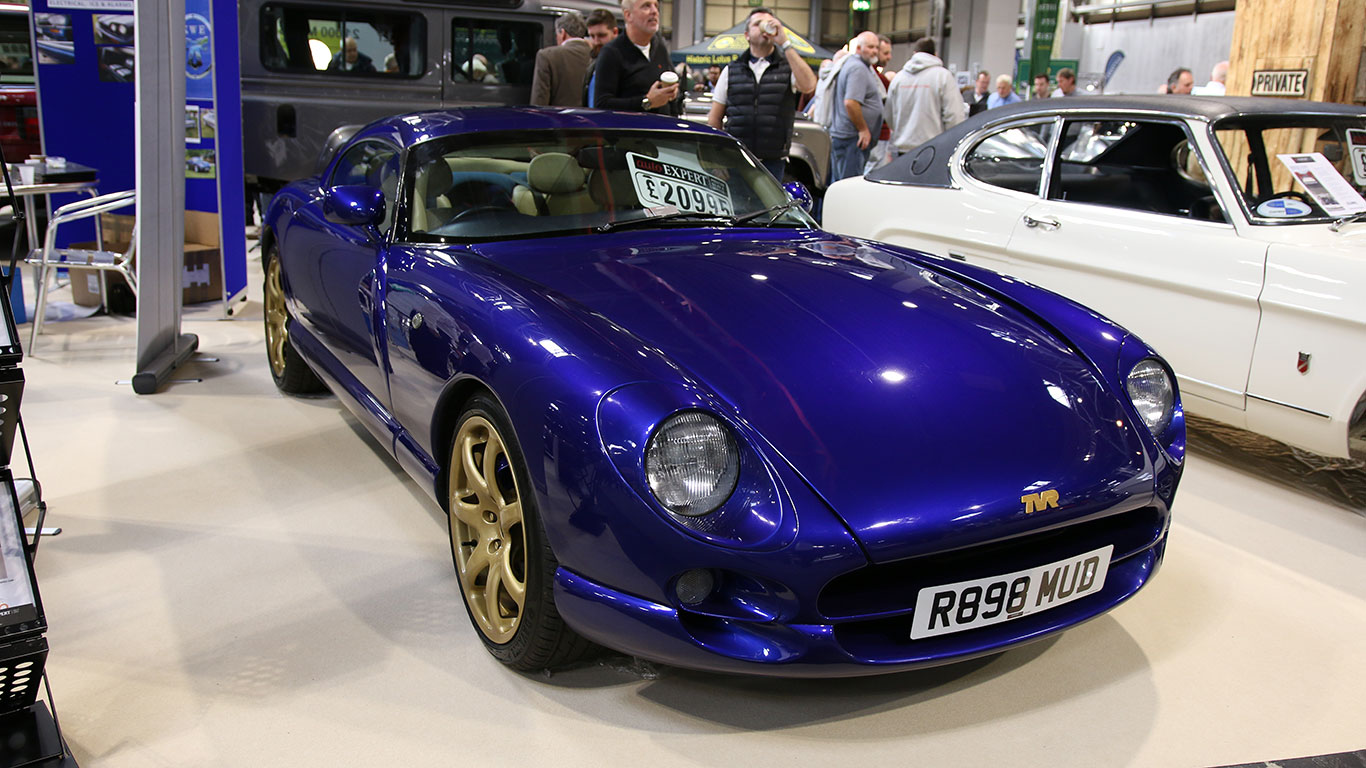 There are many cars for sale at the NEC, some of which are – how can we put this – optimistically priced. But we think £21,000 is just about on-the-money for a 1998 Cerbera. Fittingly, its last MOT was carried out in Blackpool. 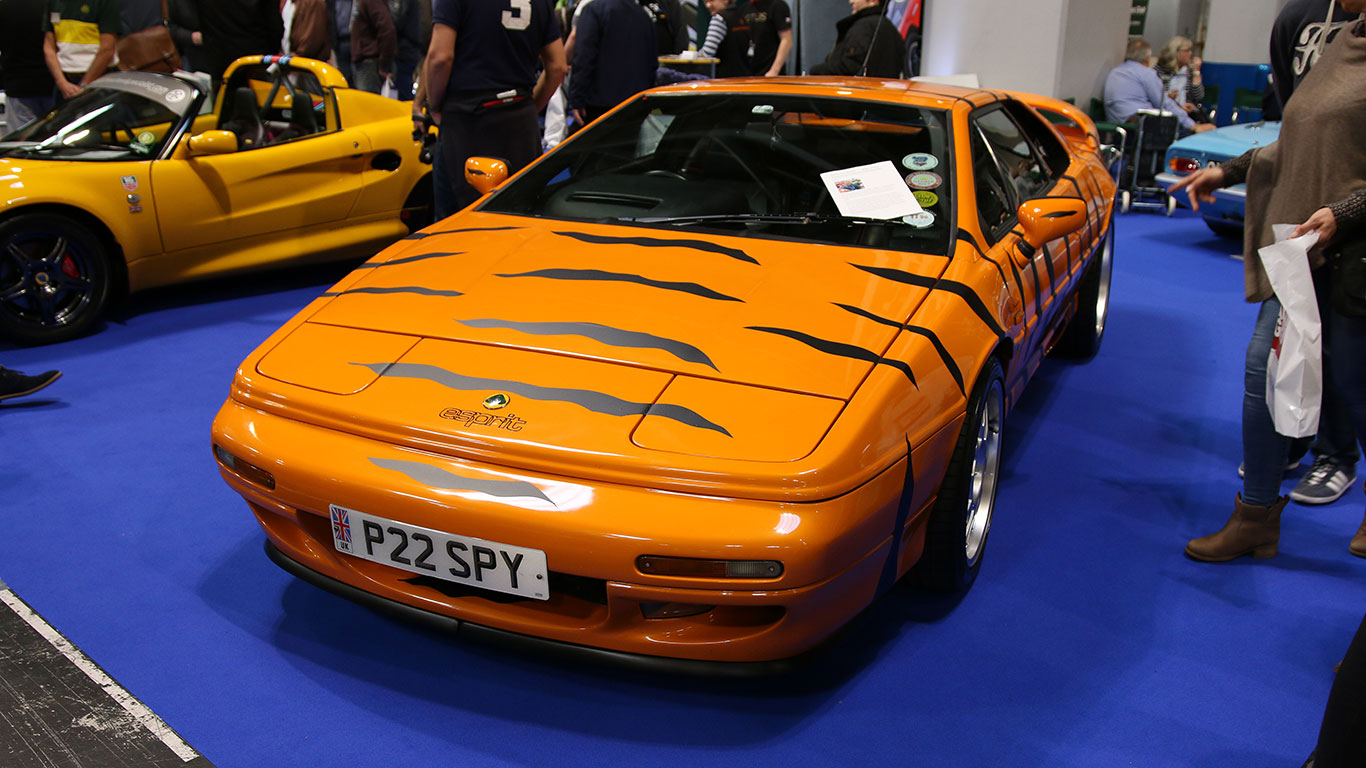 “Beneath this tasty orange paintjob is the best Esprit ever. It’s the low weight, high-excitement GT3 and it’s the supercar bargain of the year.” said Richard Bremner in Car magazine, 1997. That’s a rather fitting number plate for a car famous for its James Bond connection. 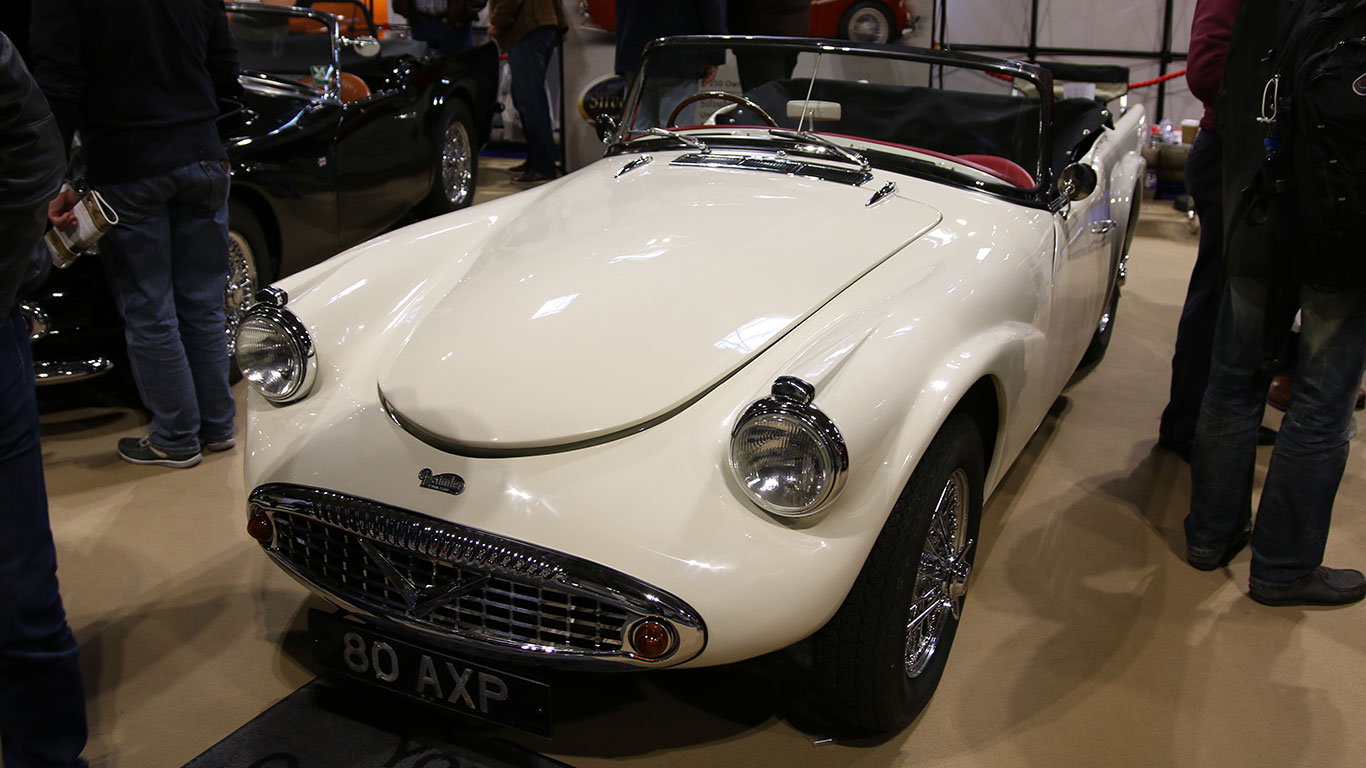 Here is a Daimler SP250, commonly referred to as the Dart. The cosmetically-challenged sports car was launched under the Dart name, but the threat of legal action by Chrysler resulted in Daimler returning to the original codename. 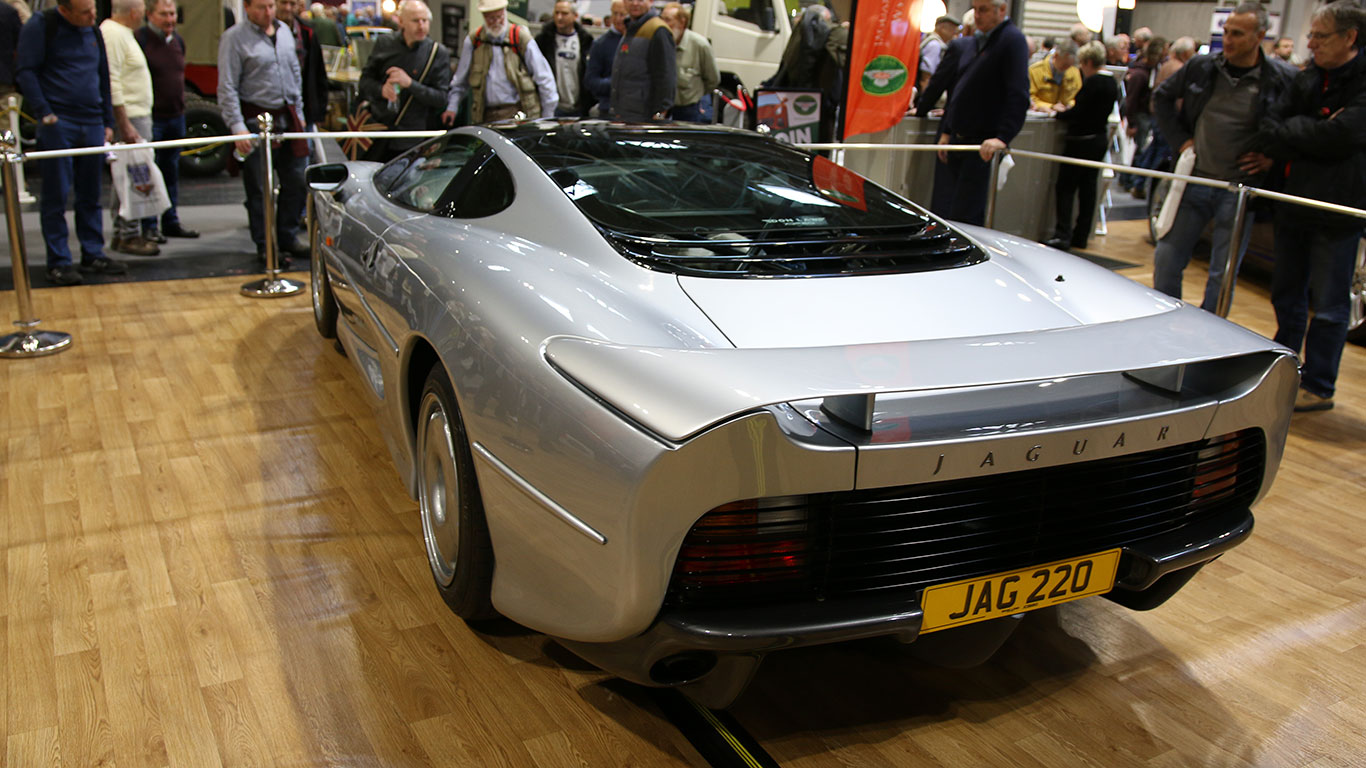 You have to stand alongside the Jaguar XJ220 to appreciate just how big it is. Needless to say, it is attracting quite a crowd at the NEC. Oh, and that number plate is genuine. 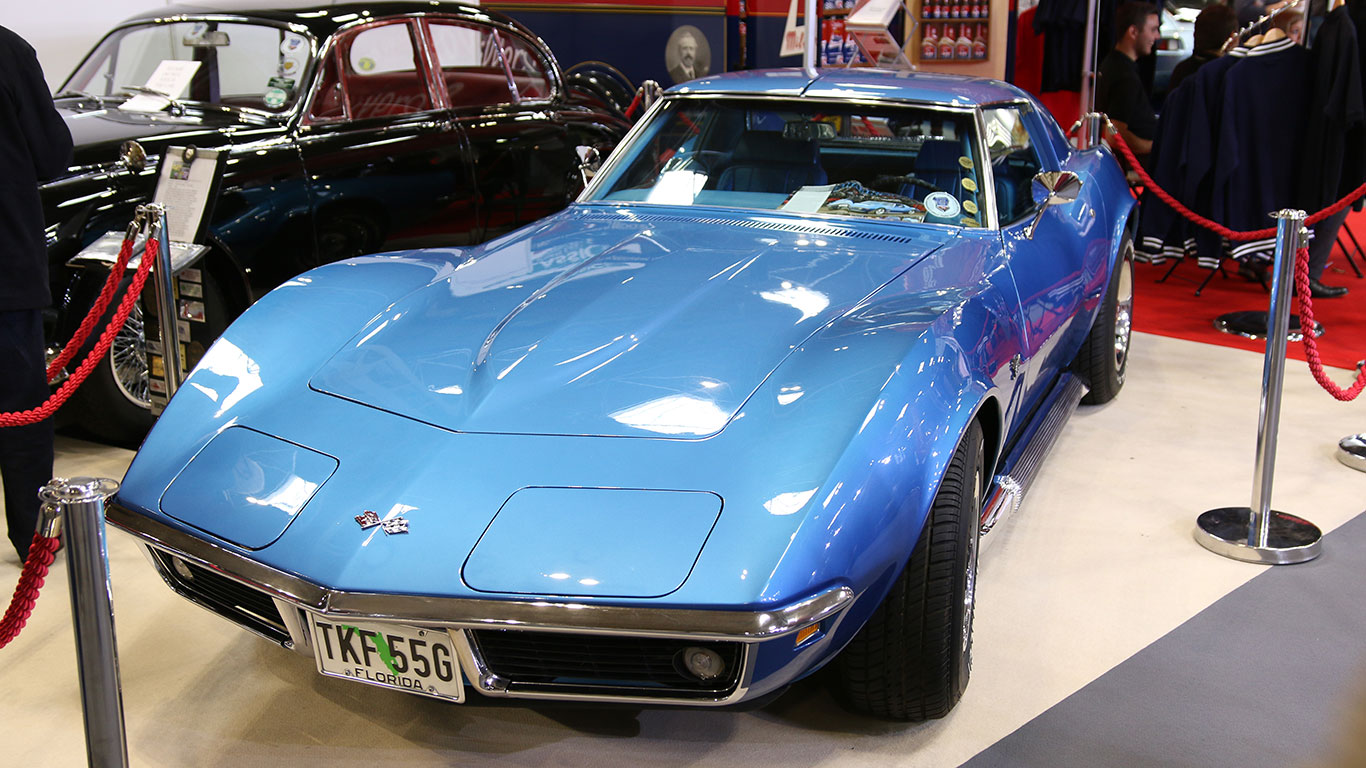 There’s no shortage of American exotics on show at the NEC, like this 1969 Chevrolet Corvette Stingray. 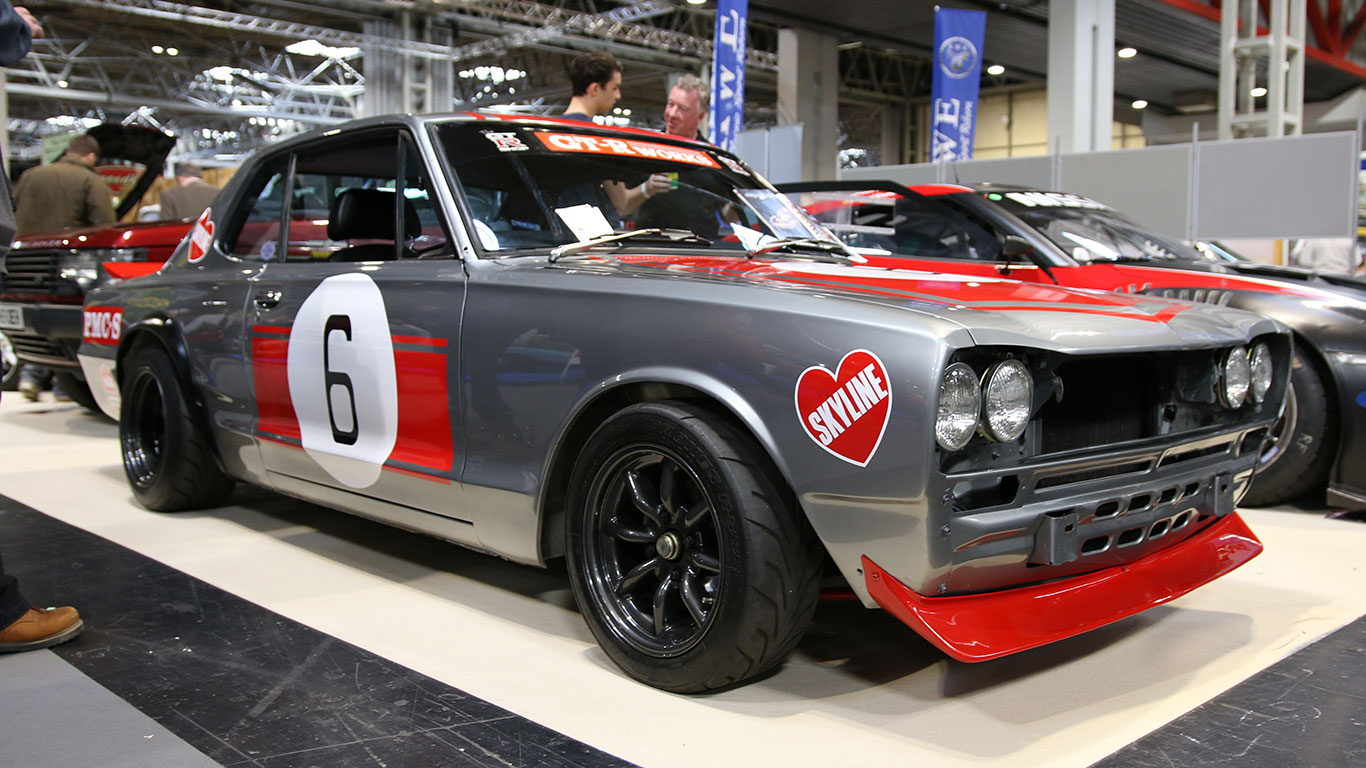 Meanwhile, this awesome Nissan Skyline GT-R is flying the flag for Japan. 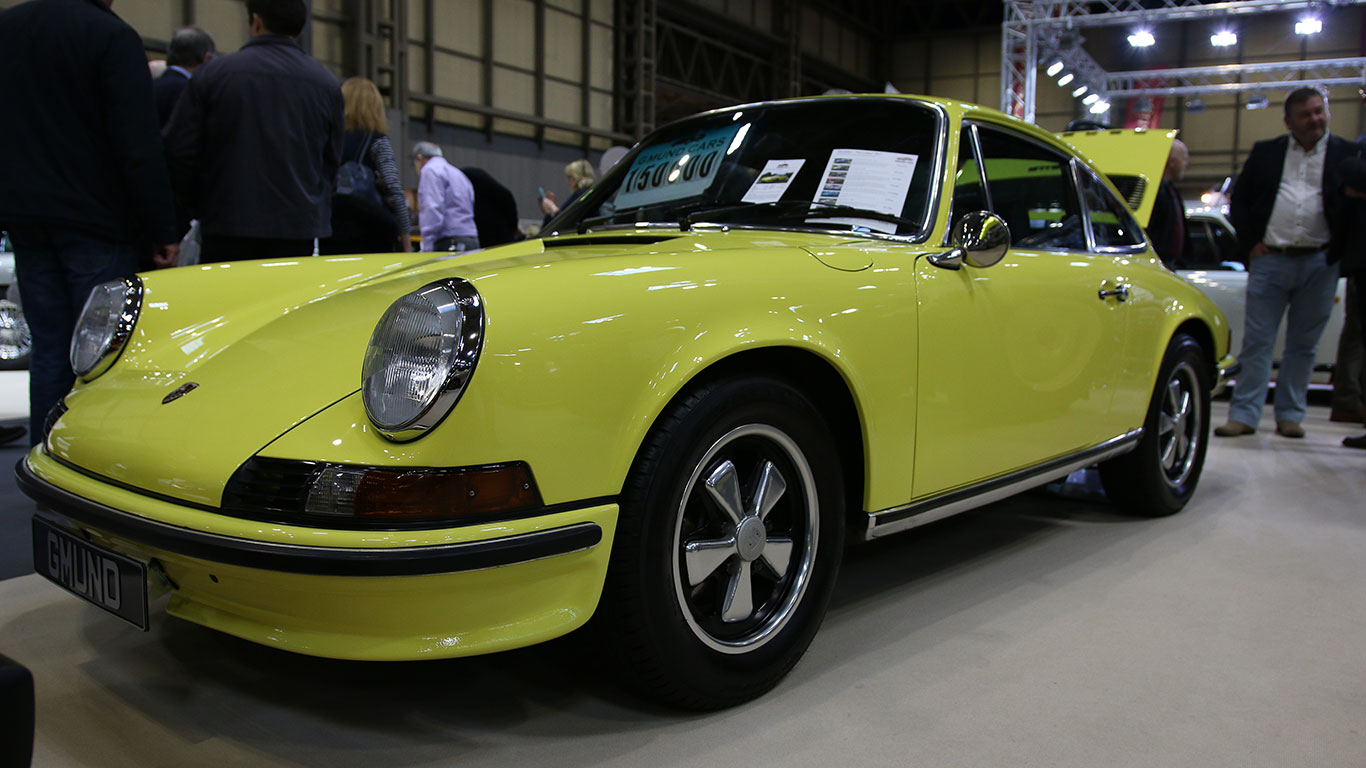 Assuming you haven’t spent a mortgage payment on parking and coffee, this 1973 Porsche 911E is available for a cool £150,000. Sold new in Germany, the car has been treated to an engine overhaul and a fresh coat of Light Yellow paint. 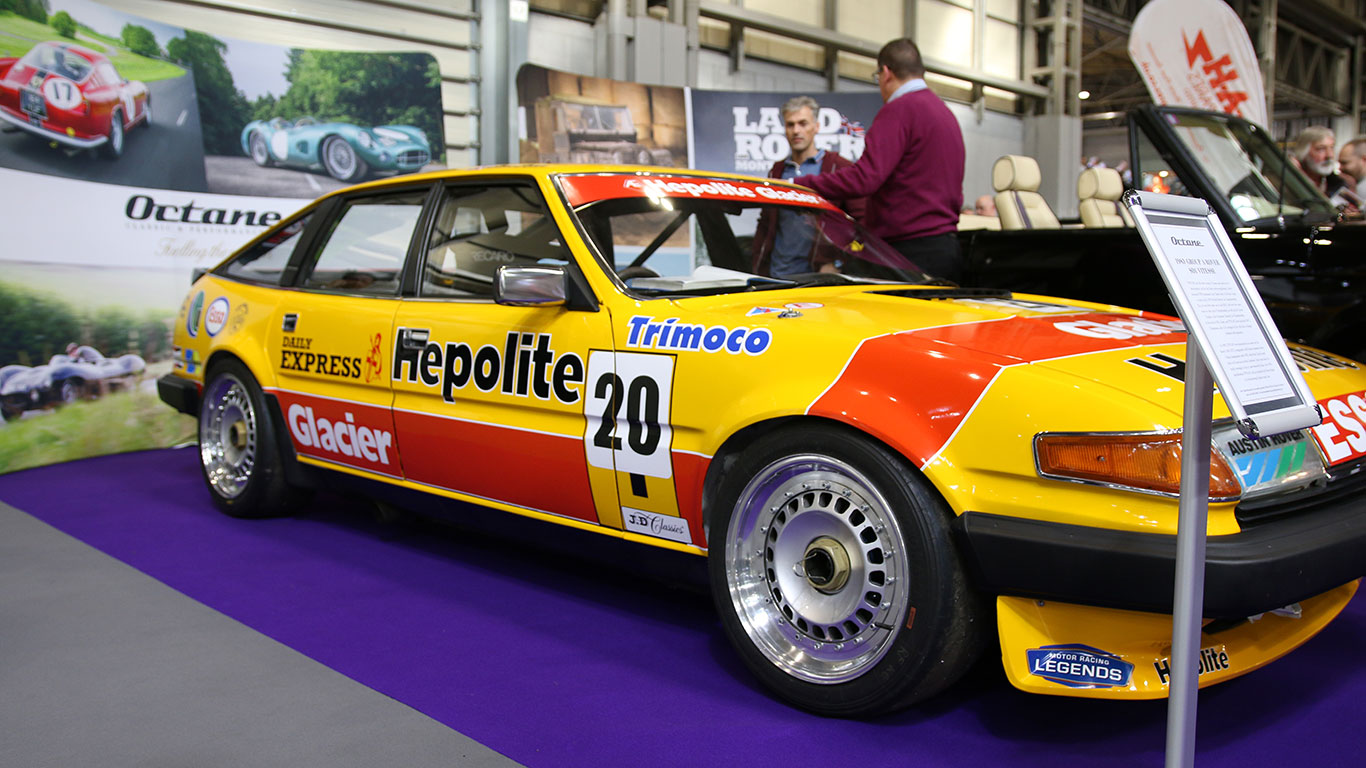 This former British Saloon Car Championship car was discovered in a barn in the Netherlands and restored to former glory by Ken Clarke, the man known as ‘Mr Rover SD1’.

>NEXT: Are these Britain’s best retro cars?

Left in storage for more than two decades, this classic Quattro now has a new owner after an online auction
Read more
Previous articleRockstar’s old Range Rover laughs in the face of the Evoque Convertible
Next articleIn pictures: the retro cars of the NEC Classic Motor Show car park

You've got a year to prepare your car for the 2021 Festival of the Unexceptional. Here, we reveal how to impress the judges at the Concours d'Ordinaire.
Read more

Jowett Javelin: a peek into a brighter future

Think of revolutionary, post-WW2 cars from Britain, and one small thought immediately comes to mind – the 1959 Mini. But 12 years...
Read more

You think a Volkswagen Up GTI is the best affordable car for a twisty road? Pah...
Read more
Great Motoring Disasters

Its name was the cleverest thing about it. Or it would have been, had the Rover marque not been so stained by...
Read more
Great Motoring Disasters

When it comes to road transport, four wheels are generally better than three, and if staying dry and safe bothers you, two...
Read more