The Ford Fiesta ST has been the default small hot hatchback for what feels like forever. If you love driving, require some practicality and have a modest budget, the answer is usually ‘Fiesta ST’.  As Ford pulls the wraps off the new Fiesta ST Edition, we remember our favourite fast Fiestas from the past three decades. 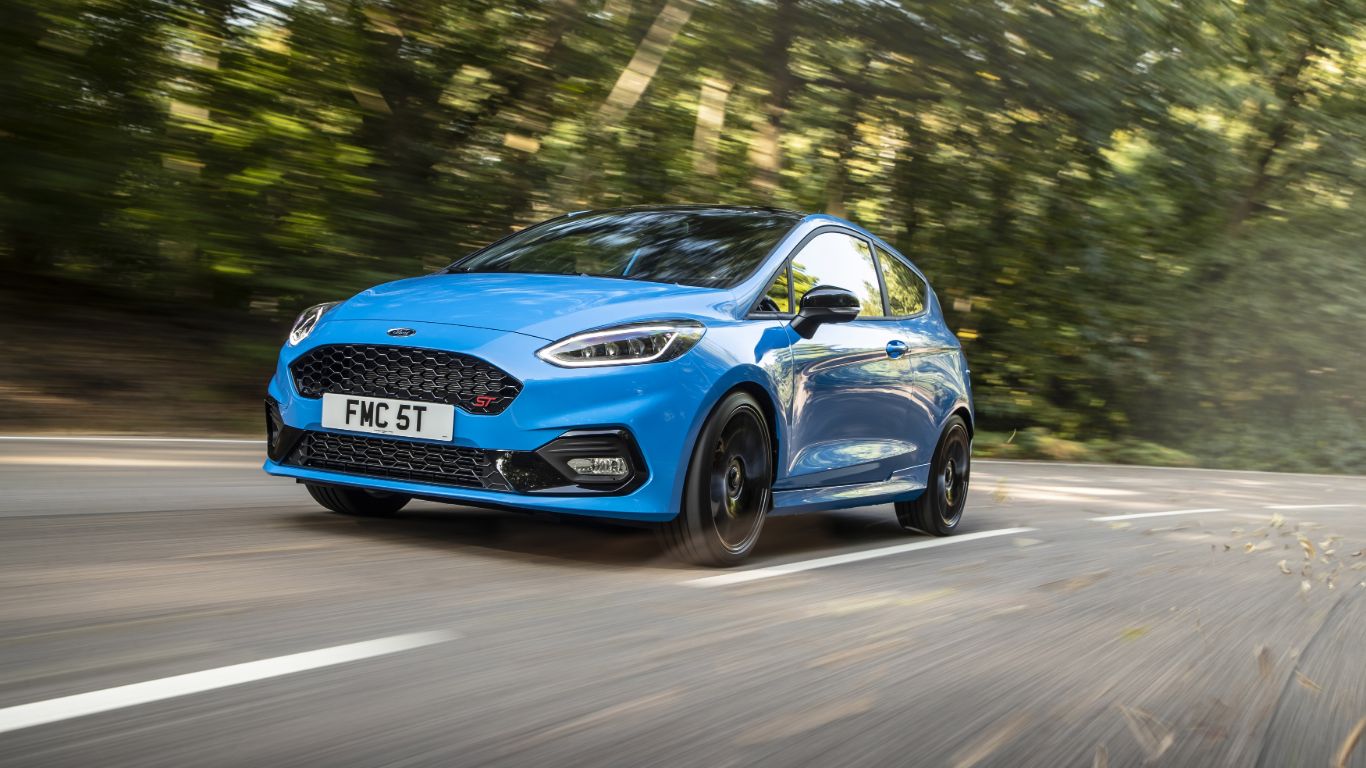 Ford aficionados will have spotted this is more or less the same package as the (Deep Orange) Fiesta ST Performance Edition from 2019. No matter, though: it’s bound to be brilliant. More fun than cars costing five times the price, in fact, particularly on real roads. It’s a car we’d happily spend our hard-earned on – and a classic-in-waiting. 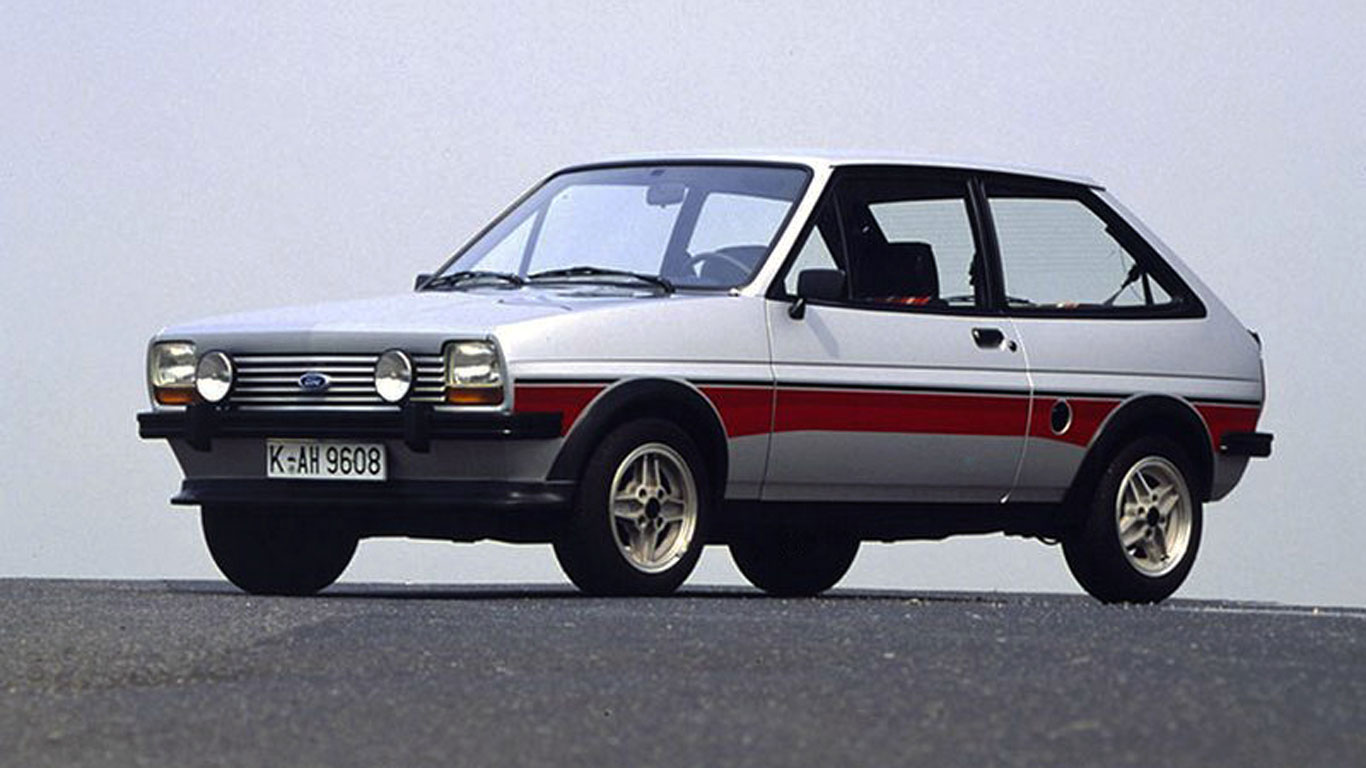 The current Fiesta ST can trace its roots back to this: the Ford Fiesta Supersport. Based on the 1300S, the Supersport featured black front and rear spoilers, wheelarch extensions, driving lights and 13-inch alloy wheels, along with fully-reclining Ghia seats and a sports gearshift. According to Ford, this was ‘the affordable alternative to mundane motoring’.

‘The car that looks as good as it feels as good as it drives,’ proclaimed the press ad in somewhat clunky English, with the Supersport available in four colours: Sunburst Red, Diamond White, Black or Strato Silver. Prices started at just under £4,500 for a red or white version, with options including a glass sunroof, push-button stereo and headlight washers. 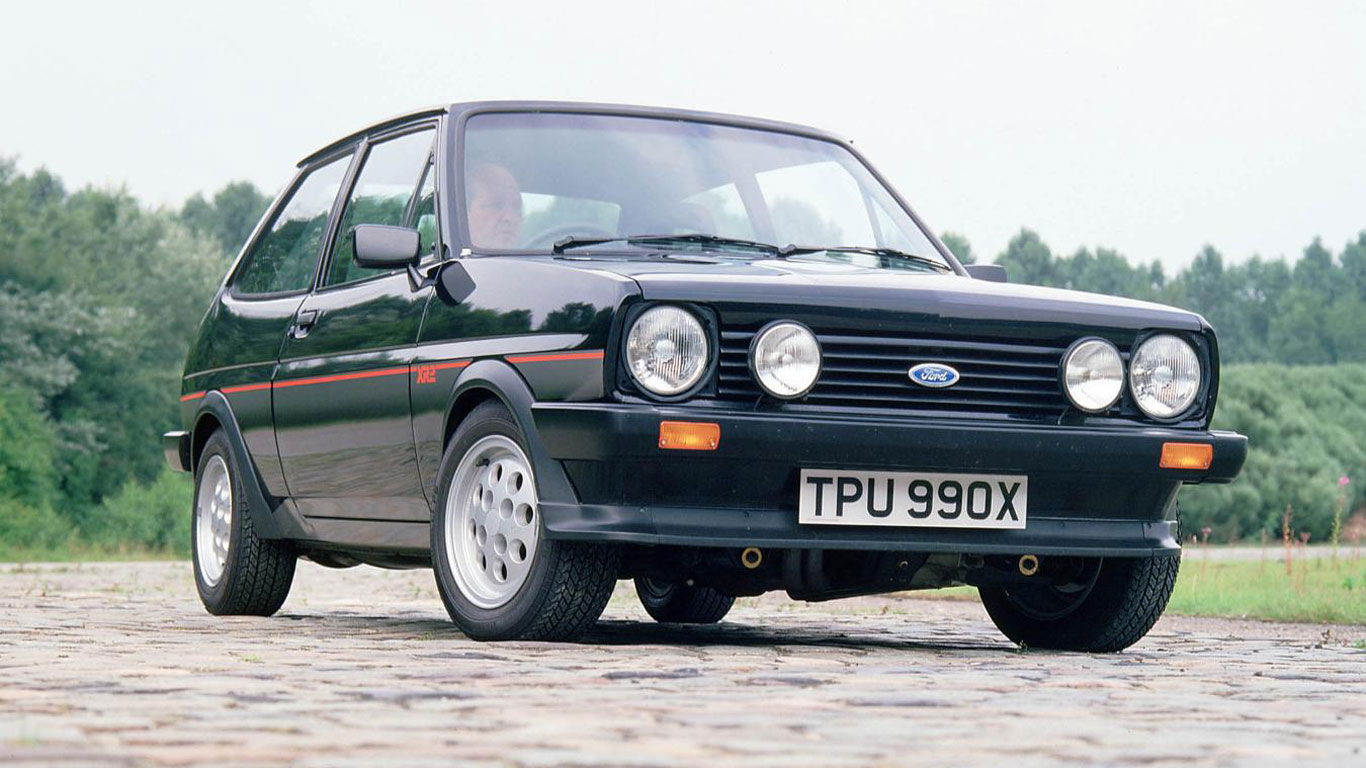 The Supersport laid the foundations for a future of hot Fiestas, starting with the XR2. Following in the screeching tyre marks of the Escort XR3, the XR2 looked similar to the Supersport but featured circular headlights, 13-inch ‘pepperpot’ alloy wheels and a full complement of dials inside.

‘The result is a car that will roar like a lion or purr like a pussycat, according to your mood,’ claimed Ford, with power sourced from a 1.6-litre Kent engine. And this little kitty was the first Fiesta to hit 100mph – 104mph, to be precise – with 60mph polished off in 9.4 seconds. Not pinned-to-the-back-of-your-sports-seat quick, especially by today’s standards, but the XR2 oozed kerb appeal. 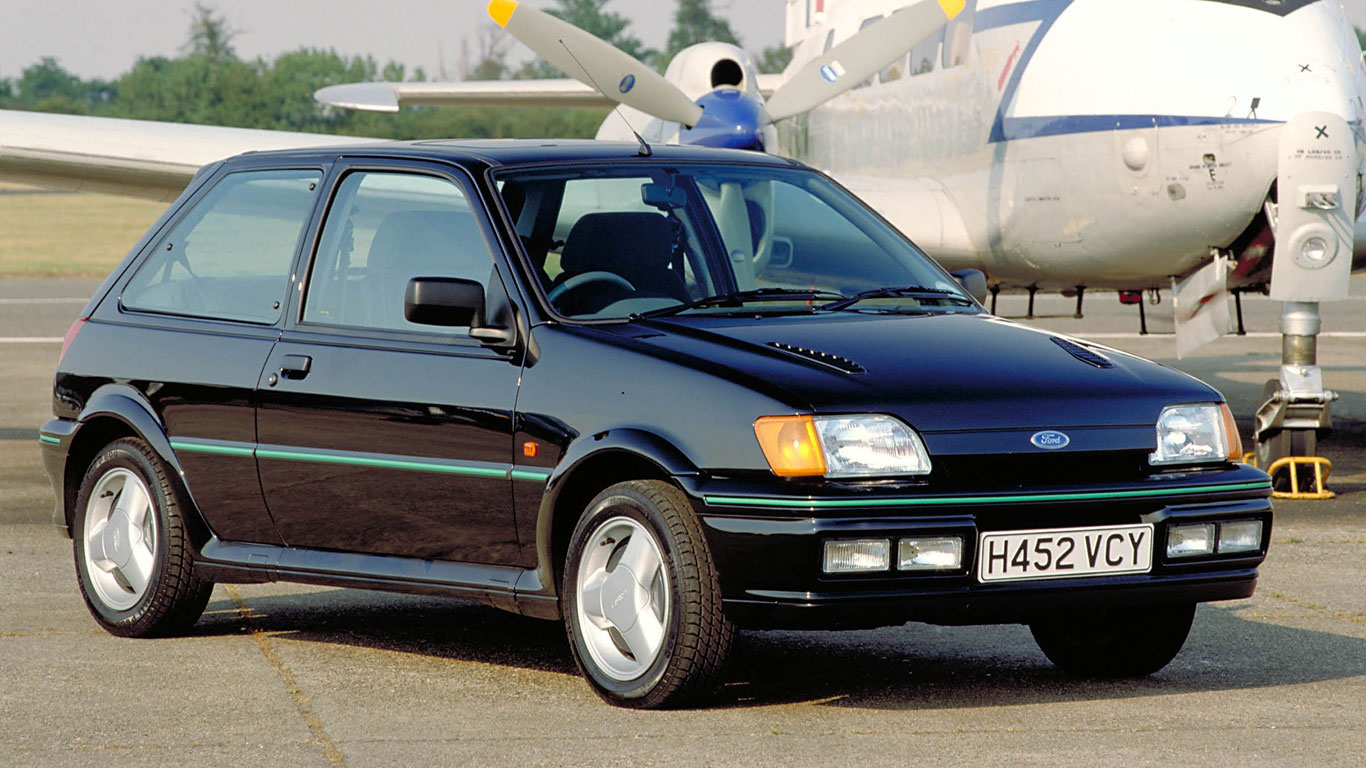 The Fiesta RS Turbo was praised for its pace, grip and cornering prowess, but this wasn’t the best era for fast Fords. Autocar & Motor labelled it a ‘crude performance machine that offers no finesse and little reward to the skilled driver’, before suggesting the Renault 5 GT Turbo or Peugeot 205 GTI would be better options. Owners were more forgiving, and the RS badge offers more kudos than its XR equivalent. 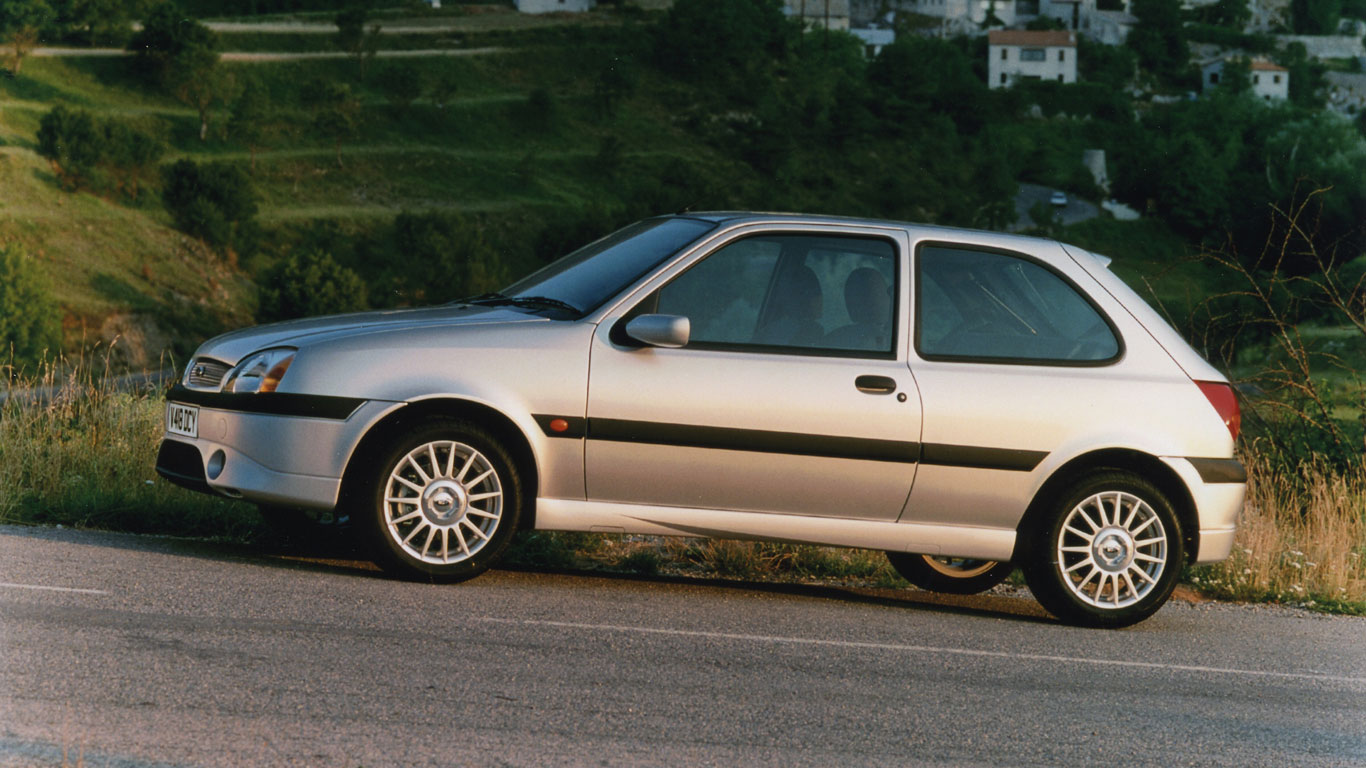 Whisper this, but history isn’t exactly littered with brilliant fast Fiestas. Draw up a list of the greatest fast Fords and, when pitched against hot Sierras, Escorts, Cortinas and Capris, you’d be struggling to argue the case for more than a couple in the top 20. But between the Mk1 and the recent ST models, there were one or two hidden gems. Not least this: the Fiesta Zetec S.

Power was sourced from a 1.6-litre engine producing a little over 100hp, to deliver a 0-62mph time of 10.2 seconds. It was, if you like, a more practical alternative to the 1.6-litre version of the Ford Puma, offering similar levels of fun on a British B-road, along with an energetic engine. 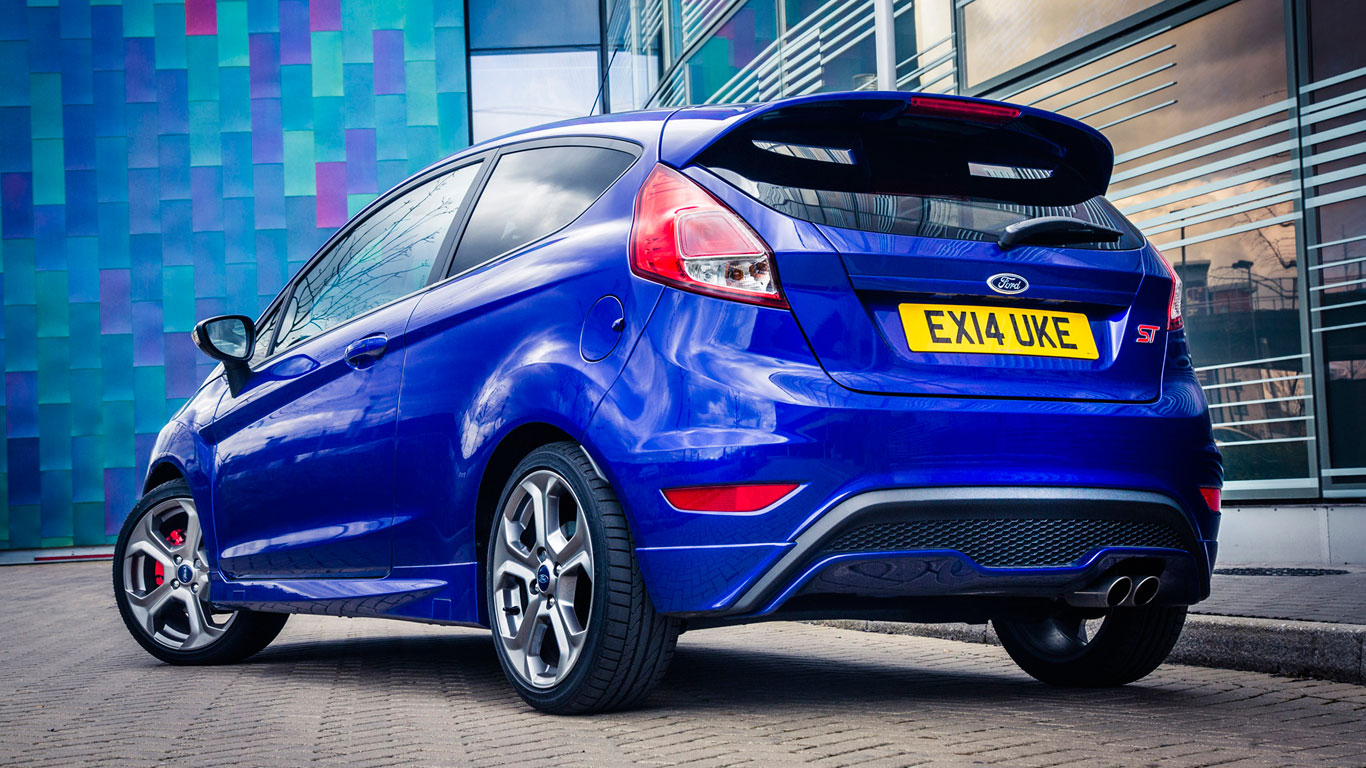 Launched in 2013, the previous Fiesta ST quickly cemented a reputation for being the best of the breed. The Peugeot 205 GTI for a new generation, if you like. Its 1.6-litre EcoBoost turbocharged engine produced 182hp – or 200hp on overboost – to deliver a 0-62mph time of 6.9 seconds.

But this Fiesta ST was never about straight-line speed or winning the traffic light Grand Prix. At its heart was a sublime chassis, with eager handling that genuinely makes it one of the best drivers’ cars ever. It was a bargain when new, and decent examples now cost less than a Dacia. A small price to pay for a hot hatch legend. 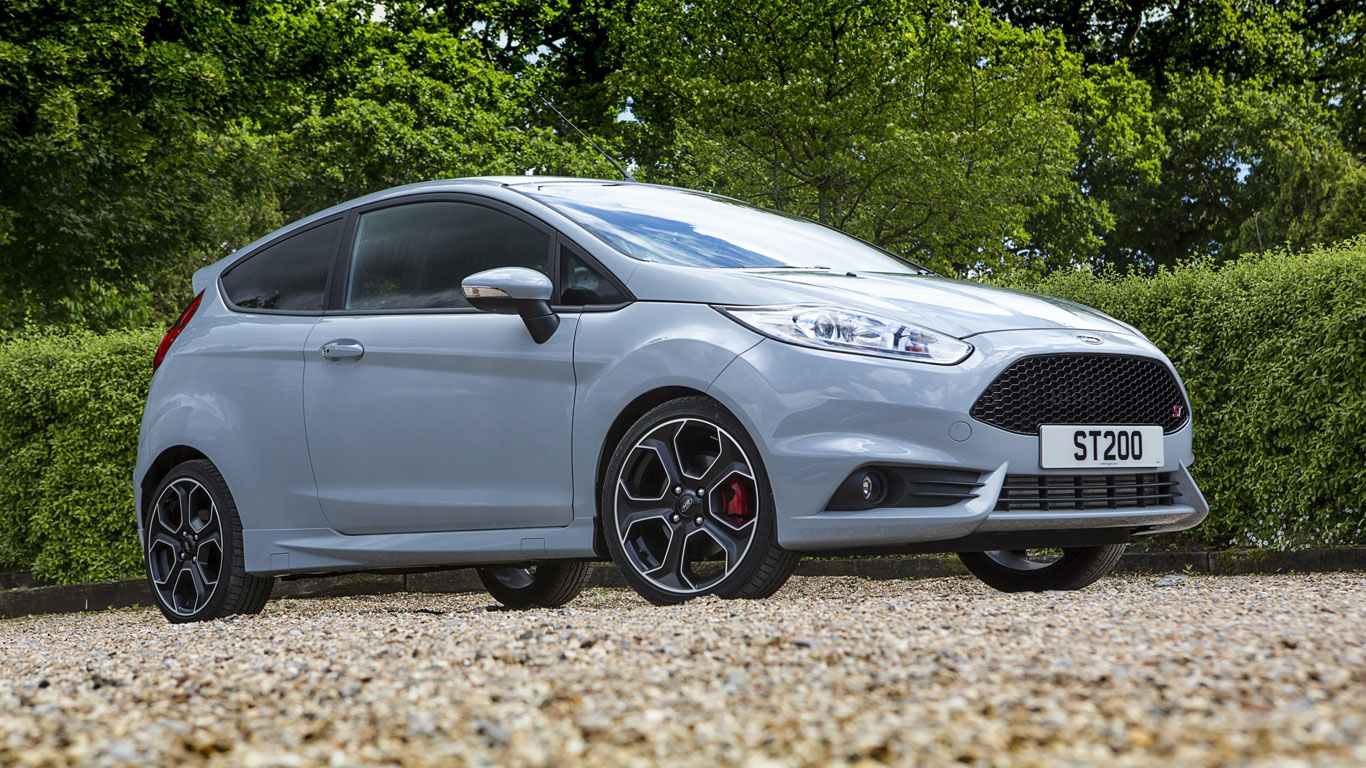 Coinciding with the Fiesta’s 40th anniversary, the ST200 special edition came with more power, more torque, tweaked suspension and a shorter final drive. Initially, production was limited to just 400 units, but demand was so high that Ford was encouraged to build more. Whatever the final total, this Storm Grey hot hatch is a cast-iron future classic.

From our review in 2016: “The Fiesta ST’s party piece is its handling. On twisty, bumpy, broken British roads, there’s very little that’ll keep up with the ST200. It’s an absolute hoon. The regular model has recently had its steering revised, and it provides levels of feedback that we’re just not used to from electric power-assisted steering.” 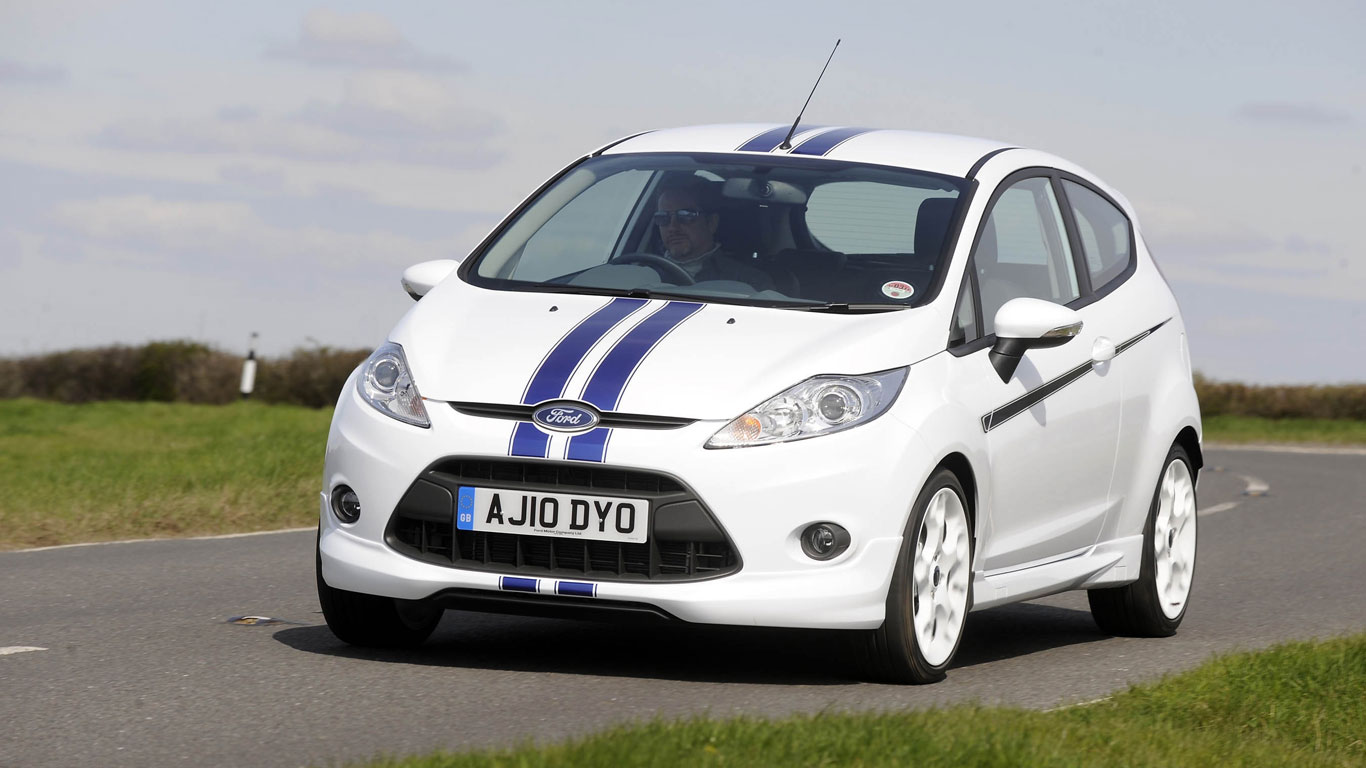 The Zetec S and S1600 felt a little like the hors-d’oeuvre before the Fiesta ST main course. Based on the Zetec S, the Fiesta S1600 had a more purposeful look, thanks mainly to go-faster stripes and white alloy wheels.

In truth, the S1600 was more warm hatch than hot hatch, but a limited production run and the distinctive ‘heritage’ styling meant the Fiesta could hold its own in an increasingly crowded market. Back then, Renault Sport still reigned supreme in the land of hot hatches, but all that would change when Ford unleashed the 2013 Fiesta ST. 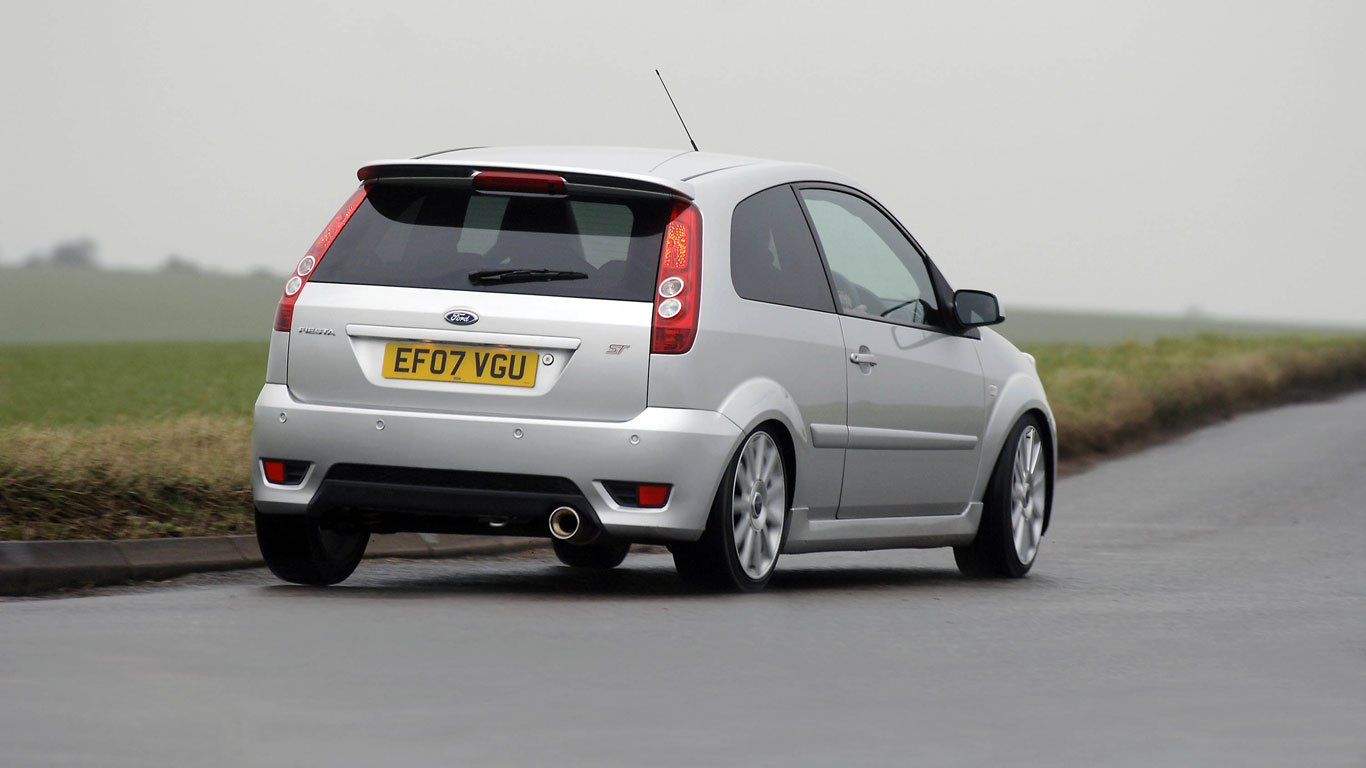 Not that the previous Fiesta ST was the first to wear the ST badge. In 2002, Ford unveiled the Rallye Concept at the Birmingham Motor Show, and a year later, the Fiesta ST Cup was introduced in Germany. These cars laid the foundations for the Fiesta ST, which arrived in 2005. With 150hp on tap, this was the most potent Fiesta to date.

Squeezing the 2.0-litre engine into the Fiesta was tricky, meaning Ford had to incline it by six degrees. The result was a supermini that didn’t feel too dissimilar to the Focus ST170. Sure, the Clio was more fun – where have we heard that before? – but there’s something deeply satisfying about a hot Fiesta with a 2.0-litre engine. And Mountune was on hand to make it even quicker. 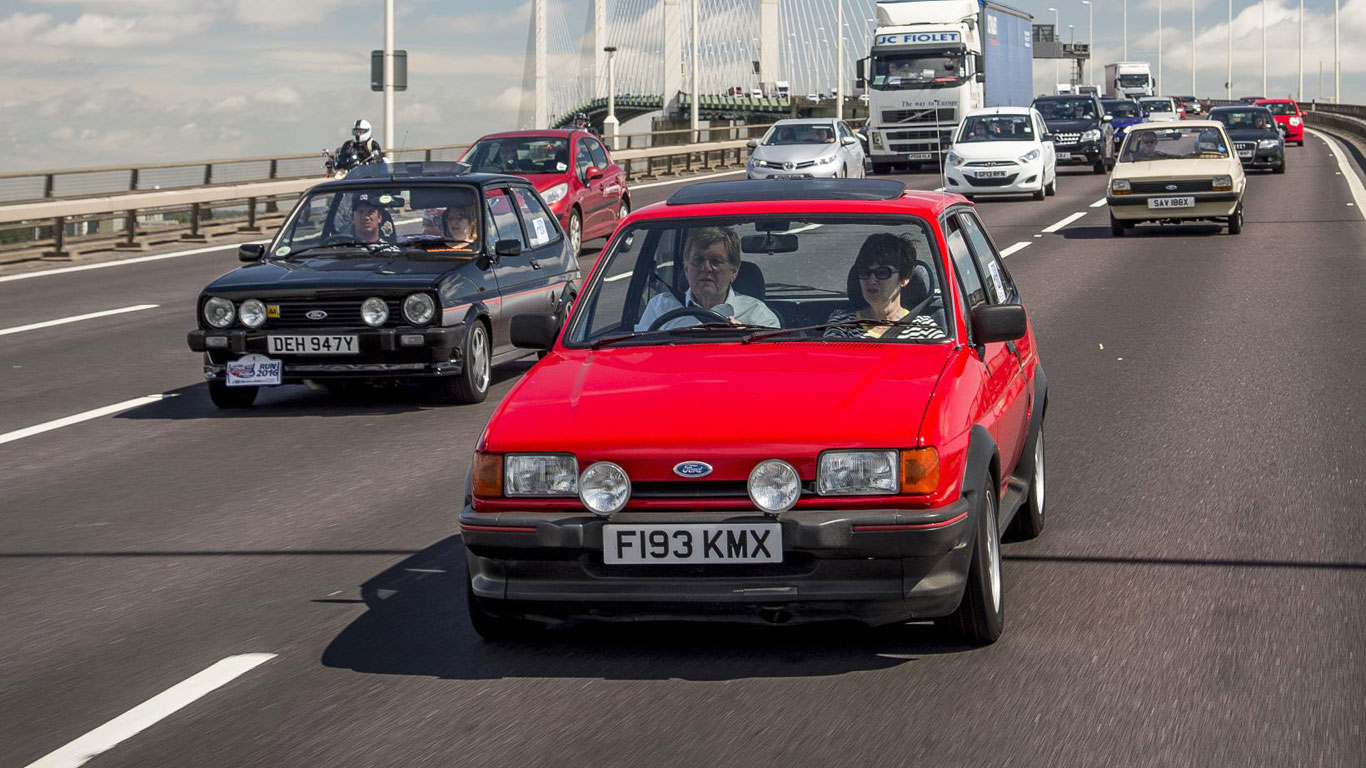 In 1984, Lionel Richie said “Hello”, Frankie Goes to Hollywood told you to “Relax”, and Ford launched a new version of one of the most popular hot hatches of the 1980s. You might have noticed a trend here, because while the Fiesta XR2 trailed the Golf GTI and 205 GTI dynamically, it had populist appeal and a Ford dealer on every corner to support it.

These were good times for Ford: in 1983, the Escort XR3i, MG Metro and Fiesta XR2 were the best-selling hot hatches in the UK, so a lot was resting on the shoulders of the Mk2 version. Power was sourced from the same 1.6-litre CVH engine found in the original Escort XR3, which was mated to a new five-speed gearbox. Ford also tweaked the suspension to improve the handling over the Mk1. 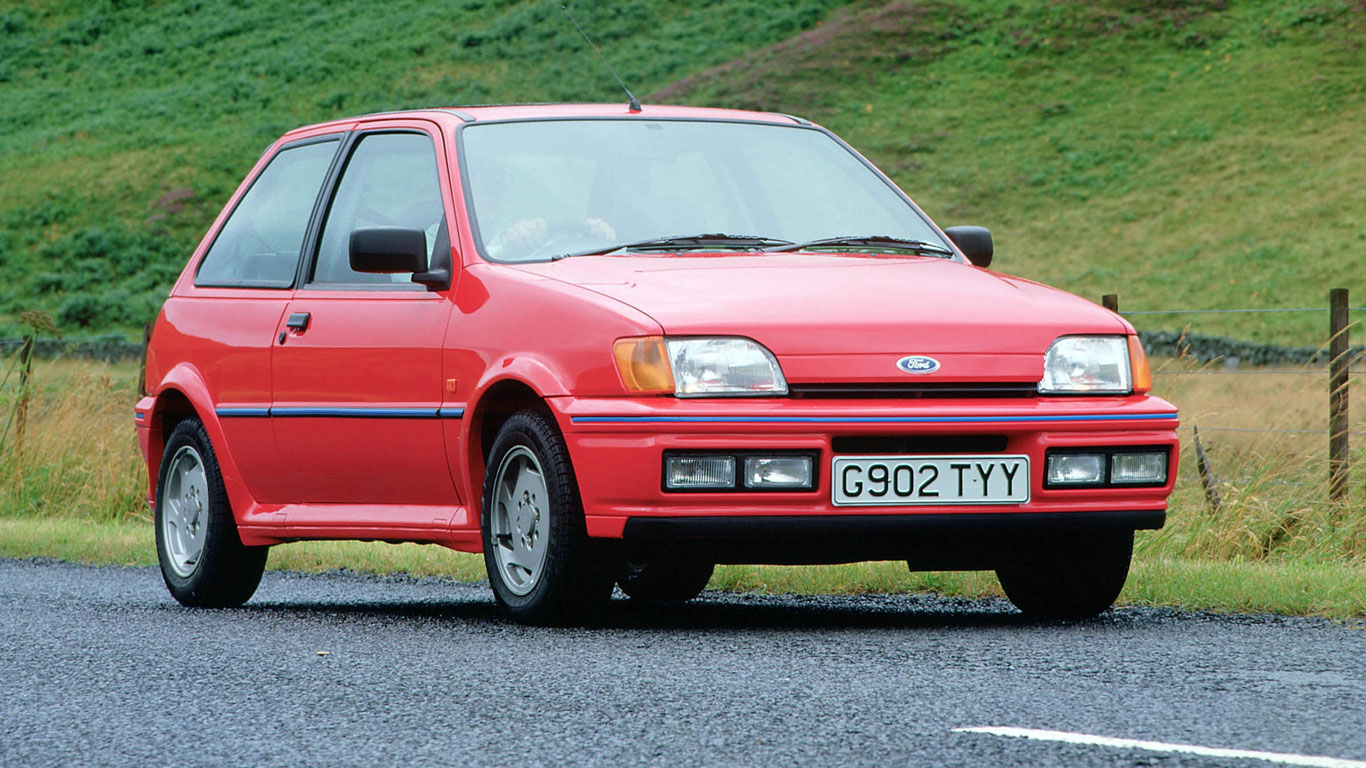 Launched in 1989, the XR2i was the first Fiesta to feature a fuel-injected engine, albeit with the same 1.6-litre CVH lump. Ford made a big song and dance about the EEC IV management system, which was also used in Benetton F1 cars. Friday evening pub bragging rights, secured.

Other features of the XR2i included a deep front spoiler, roof-mounted rear spoiler, sports seats and a thick-rimmed steering wheel. Later cars were powered by a much-improved 1.8-litre Zetec engine, which also formed the heart of the future RS1800 version. This was the beginning of the end for the XR badge, which fell victim to the rise in car crime and Ford’s desire to keep a lower profile in the performance segment. 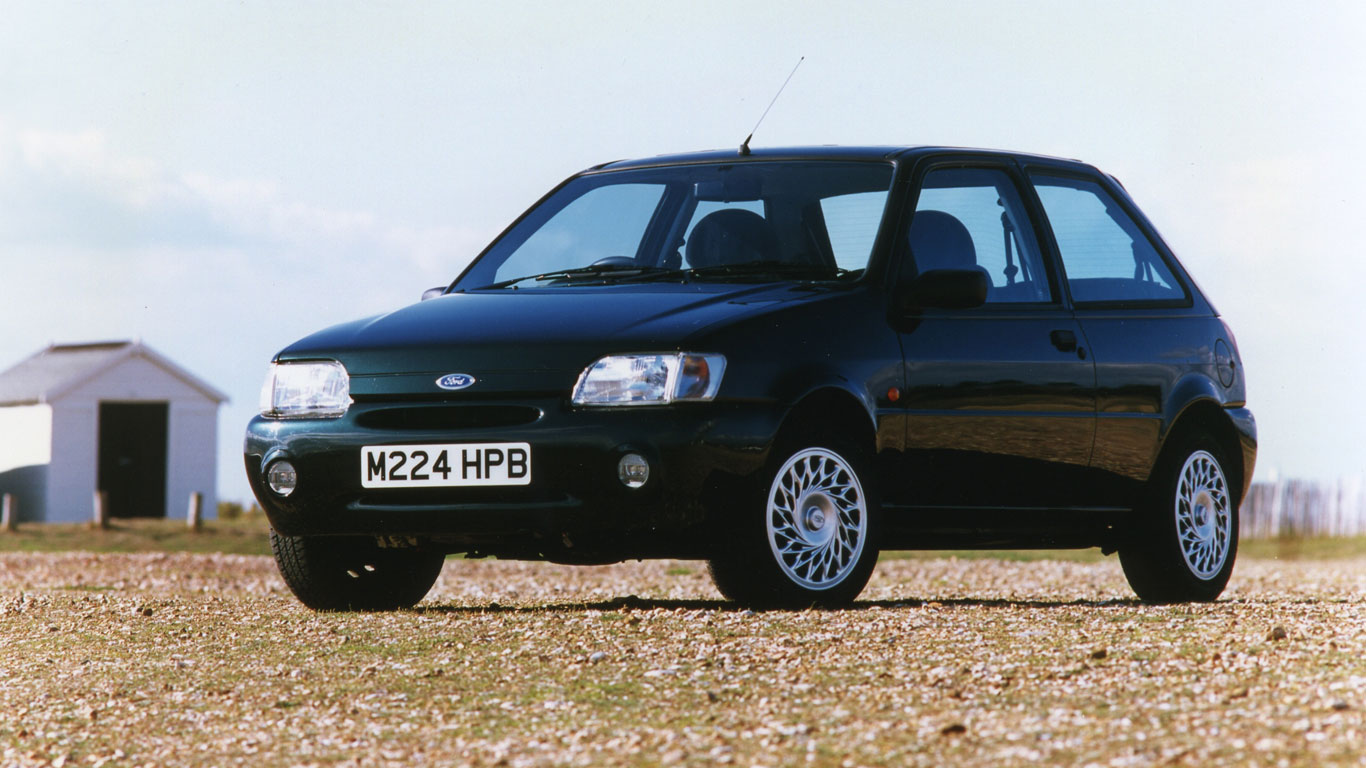 This was Ford’s answer to escalating car thefts and the effect this had on insurance premiums: the oft-forgotten Fiesta Si. The RS and XR badges were consigned to the bin, with Ford creating something a little more inconspicuous. The result is one of the best looking Fiestas ever.

When new, it made sense to upgrade from the 1.4-litre to the 1.6-litre 16v Zetec engine, which made better use of the Fiesta’s stiffer and stronger bodyshell. Obviously, both were less powerful than the 1.8-litre XR2i, but they were also cheaper to run and, perhaps crucially, much less expensive to insure. 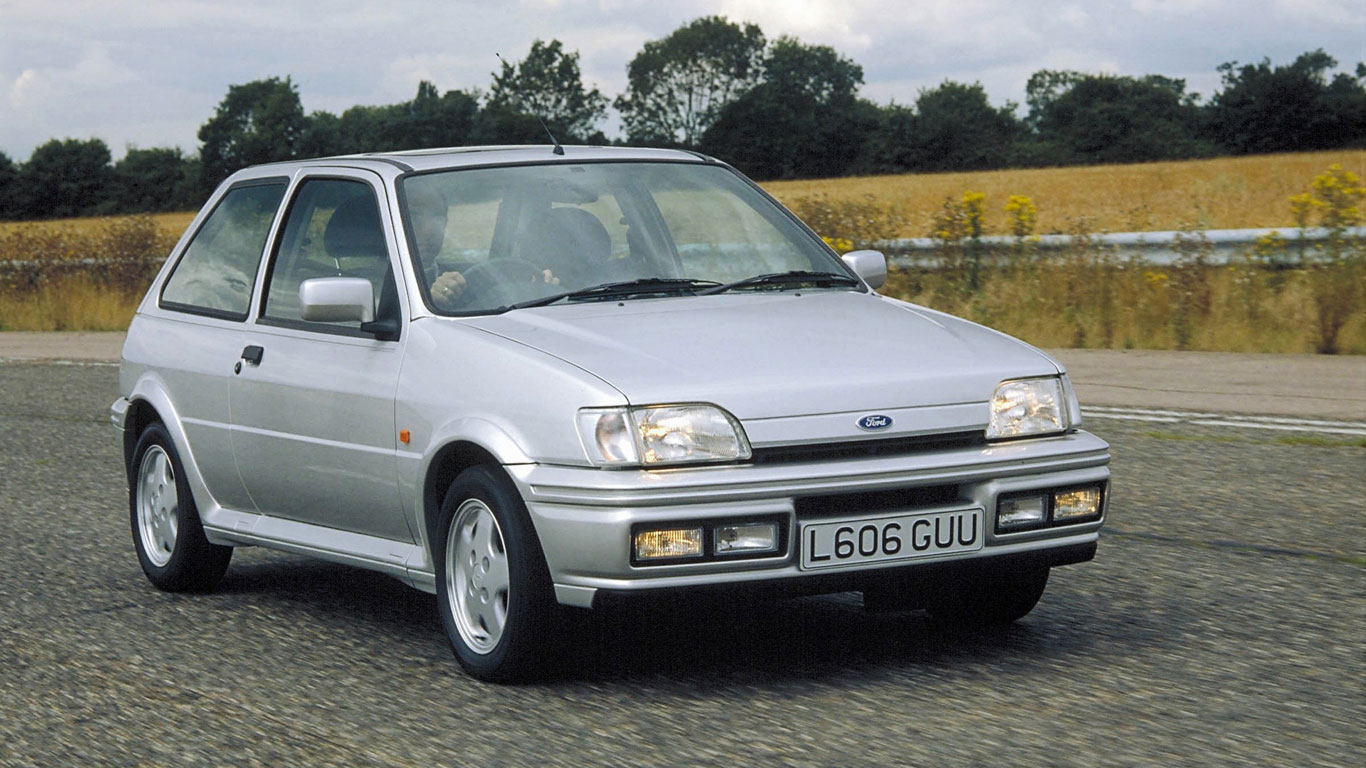 We conclude with one of the cheapest ways to put a Ford RS in your garage: the Fiesta RS1800. Launched in 1992, this was a replacement for the quick but flawed RS Turbo. It was powered by the same 1.8-litre Zetec engine found in the XR2i, but tuned to provide more power.

Interestingly, it packed a similar punch to the RS Turbo, but thanks to a more predictable power delivery, the RS1800 was more satisfying to drive. According to the RS Owners Club, the revised suspension setup ‘was and is still second to none to this day’. High praise from a trusted source and proof that the RS1800 was arguably the best Mk3 Fiesta of them all. Good luck finding an original and unmodified one.

Ford Escort: the rise and fall of Britain’s best-seller

We turn the clock back 25 years to reveal the 25 most popular cars in 1995. Where have all those Orions and Montegos gone?
Read more
Previous articleCelebrating Citroen’s most innovative cars
Next articleThe greatest second-generation cars

Concours of Elegance 2020: legendary Ferraris to star at Hampton Court

A collection of rare Ferraris, including a 250 GTO, is among the highlights of Concours of Elegance 2020. Here’s what you can expect to see.
Read more

Left in storage for more than two decades, this classic Quattro now has a new owner after an online auction
Read more
News

An ultra-rare model in its own right, having been the personal car of a true racing icon makes this BMW truly special
Read more
News